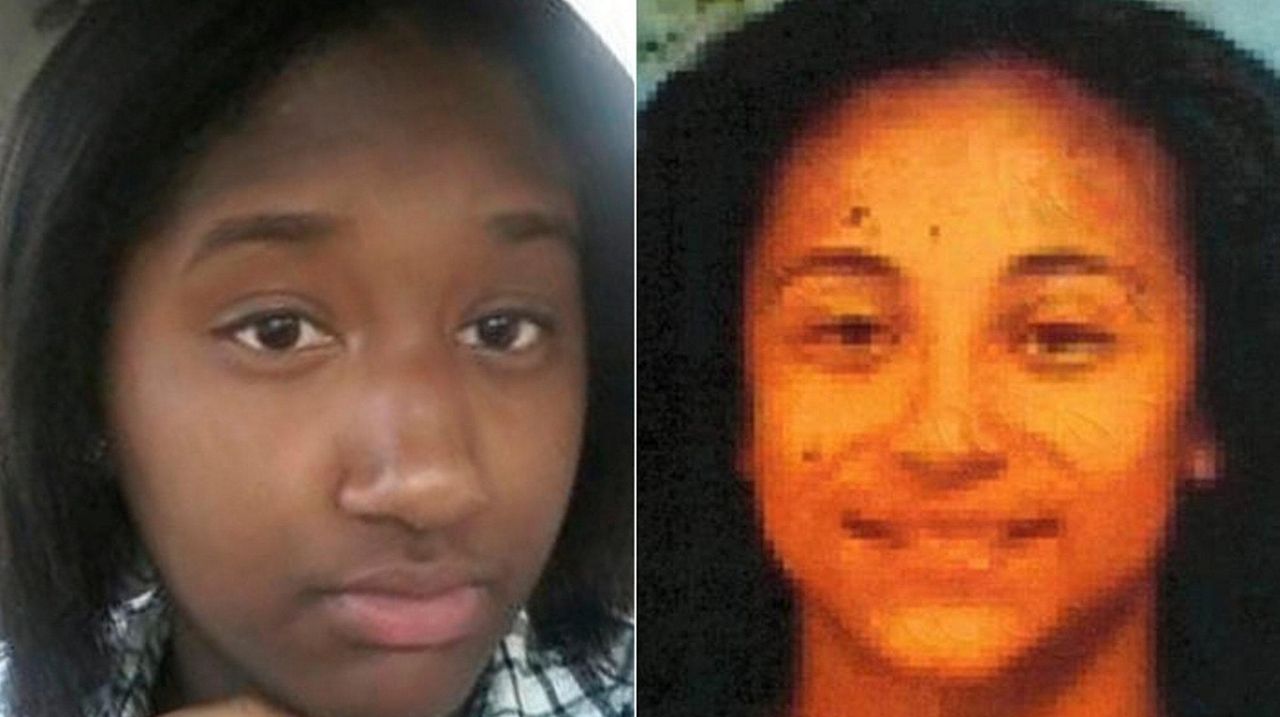 WASHINGTON — President Donald Trump and U.S. Attorney General William Barr announced Wednesday that federal prosecutors would seek the death penalty for the alleged leader of the Brentwood/Central Islip clique of MS-13 in the killings of two teenage girls and five others in a spate of gang violence on Long Island beginning in 2016.

Federal prosecutors filed a notice of intent Wednesday to seek the death penalty for Alexi Saenz, 25, of Central Islip, known by the gang nicknames  of “Blasty” or “Big Homie.” In the document, prosecutors outlined their justification for the death penalty, saying, in part, the killings were committed in an "especially heinous, cruel and depraved manner in that it involved torture and serious physical abuse to the victim" and noting his alleged leadership role in the gang.

Prosecutors also cited in their memo the premeditation of his alleged crimes, the accusations of multiple killings or attempted killings, his alleged leadership role, recruitment and use of juveniles and the impact of the killings as reasons for seeking the death penalty for Saenz.

If convicted and sentenced to death, Saenz would be the first person convicted of murder in New York to be executed by the federal government since 1954.

MS-13 linked to deaths of these 52 LIers

David Ruhnke, one of Saenz’s attorneys, declined to comment, except to say: “We will do our talking in court.”

The death penalty announcement was just part of a sweeping plan of attack against the gang by federal officials, including a 24-count indictment also unsealed Wednesday charging eight alleged MS-13 gang members with racketeering offenses in connection with six murders, two attempted murders, a kidnapping conspiracy and narcotics trafficking conspiracies.

"We believe the monsters who murder children should be put to death," Trump said during a briefing with reporters inside the Oval Office Wednesday morning. "We seem to have quite a good agreement on that. These people murder children and they do it as slowly and viciously as possible. We will not allow these animals to terrorize our communities. And my administration will not rest until every member of MS-13 is brought to justice."

Barr, who spoke alongside Trump, noted that the president previously met with the families of Kayla Cuevas and Nisa Mickens, who were beaten and hacked to death with machetes, allegedly by MS-13 gang members in Brentwood, in September 2016.

"The person that we are seeking the death penalty against was involved in those murders, as well as the murder of two African Americans who they, they just saw on the street, [and] thought they were from a rival gang,” Barr said.

Barr described Long Island as "one of the hotbeds of MS-13 activity, or at least was," and he briefly lauded the work of Assistant U.S. Attorney John Durham Jr., from the Eastern District of New York. Durham, who serves as the director of Joint Task Force Vulcan, a group formed to eradicate the gang’s footprint, also attended the Oval Office briefing and said he has been working on MS-13 cases for 10 years.

Trump, who has twice visited Long Island and held roundtables with law enforcement officials and victims on the issue of MS-13, said the arrests were part of an “all out campaign” to “destroy MS-13, a vile and evil gang of people.” Trump called Saenz "a bloodthirsty MS-13 leader responsible for the despicable killing of seven Americans, including two teenage girls."

Kayla's mother, Evelyn Rodriguez, went on to become an anti-gang activist after the murders and was recognized by Trump during his State of the Union address in 2018. She was later killed after being run over in a 2018 dispute with a woman who had removed a memorial to the girl near the site where she had been murdered.  The woman, Ann Marie Drago, was convicted of criminally negligent homicide.

The federal crackdown also includes charges against eight adults and two minors alleged to be MS-13 members for five  killings in Nassau County — that would make the adults accused potentially eligible for the death penalty if convicted, officials said.

Barr also noted the arrest of 21 leaders of the gang based in Nevada and California, known as the “Hollywood Clique” that he said were also involved with crimes on Long Island.

Nisa’s father, Rob Mickens, said he was not consulted on the death penalty decision and doesn’t support that means of punishment for the alleged killer of his daughter.

“You don’t take another’s life to compensate for the ones that were lost,” said Mickens by phone Wednesday. “We’ve been doing that for too long, and it really, in my opinion, it needs to stop.”

“Even though these criminals have parents, their parents should not have to suffer the way I’ve been dealing with this for the past four years,” said Mickens, 43, of Staten Island.

“He could rot in jail,” said Mickens, who said he’d be satisfied with Saenz and the other defendants being sentenced to life in prison.

Mickens said he understands the decision to seek the death penalty rests with the attorney general, but he should have been consulted.

“It’s not right,” Mickens said. “This is not a John Doe case. This is a case that involves my family so a simple ‘how do you feel about it?’ would have been nice.”

Freddy Cuevas, father of Kayla, said in an interview: "It’s not going to bring Kayla back but it’s going to seek some kind of justice because what they did was horrible."

Daniel Lewis Lee, 47, was executed Monday by lethal injection at the federal prison in Terre Haute, Indiana, the site selected by the Justice Department for federal executions. He had been convicted of the murder of a family of three during a robbery for his white supremacist group, according to federal prosecutors.

Saenz is not the first member of MS-13 for whom federal prosecutors will be seeking the death penalty.

In January, federal prosecutors in Virginia said they would seek the death penalty for an MS-13 leader accused of two murders — one of a 14-year-old whom he believed spied for another gang, and one of 17-year-old he thought was an informant.

Federal prosecutors are also considering whether to seek the death penalty against more than a dozen other alleged members of MS-13 if convicted of other killings in Suffolk.

Among those defendants are Jairo Saenz, Alexi’s brother and the alleged No. 2 in the gang’s Brentwood Sailor’s clique, who is known as “Funny,” and who is also charged in the seven killings, including that of the two girls.

In addition to the killings of the Kayla and Nisa, Alexi Saenz is charged in five other killings committed during in a spree that stretched from 2016  to 2017. They involved the deaths of Michael Johnson in January 2016, who might have been mistaken for a rival gang member because he was wearing the red colors of the Bloods; three believed to members of the rival 18th Street gang: Oscar Acosta in April 2016; Javier Castillo in October 2016; and Esteban Alvarado-Bonilla in January 2017. The Saenz brothers were also charged with the killing in October 2016 of Dewann Stacks who was thought to be a member of an unnamed rival gang.

The last person executed for a federal crime committed in New York was in 1954. Gerhard Puff, a Midwestern bank robber, was captured in Manhattan after a gun battle in which he killed FBI agent Joseph Brock.

In 2016, a federal judge in Brooklyn overturned a jury verdict that Ronell Wilson, who had convicted of murdering two undercover police officers, should face the death penalty. The judge ruled that Wilson had such a limited intellectual capacity that he should not be eligible for execution. Wilson had been the first person in New York to be sentenced to the federal death penalty in 50 years.

"Putting these men in a federal prison for the rest of their lives, or facing possible death sentences, may not mean much to them as members of MS-13 because it fits their macho bravado. But it means a tremendous amount of relief to the communities on Long Island they've terrorized by using machetes to murder teenagers."

Singas: Federal MS-13 crackdown rooted on Long IslandThe Nassau district attorney credits her deputy chief and Nassau detectives for conducting a yearslong investigation into the street gang. Feds: A brutal killer, he led MS-13's LI resurgenceCourt documents describe the 25-year-old as in command of the Brentwood-based "Sailors" clique of MS-13 as it grew on Long Island. They call Brentwood home. MS-13 won’t change that.We followed four Brentwood families for more than a year who say MS-13 gang violence doesn't define their hometown. Read their stories. Lawyers: No death penalty for brothers in Brentwood murdersAttorneys for two leaders of the MS-13 street gang, who are accused of six murders, including Kayla Cuevas and Nisa Mickens, argue against imposing the death penalty.