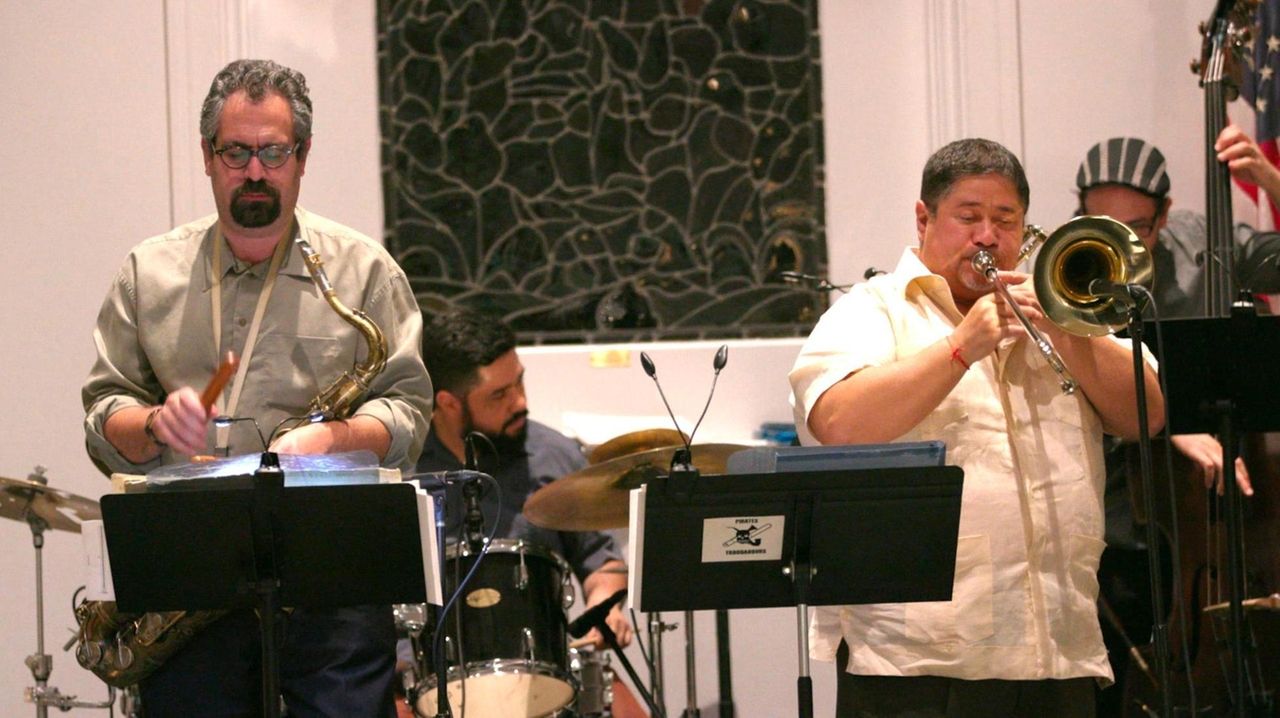 The sanctuary is rocking on Sept. 27 at the Church-in-the-Garden, an American Baptist congregation in Garden City, to the Latin jazz beat of Papo Vazquez and his Mighty Pirates Troubadours as part of the church's program to attract more community members. Credit: Newsday / Kendall Rodriguez

The sanctuary is really rocking on a Friday night at the Church-in-the-Garden, an American Baptist congregation in Garden City. Not to “Rock of Ages,” however, but to the Latin jazz beat of Papo Vazquez's Mighty Pirates Troubadours.

Applause rings out from the pews as the New York City-based combo — which features veteran jazz man and vocalist Vazquez, a pianist, a string bass player and three drummers — finishes a rousing tribute to “El Morro,” Puerto Rico’s 16th century fortress. About 50 concertgoers are attending the inaugural night of the Jazz-in-the Garden series, which continues Oct. 25 with R&B singer Alyson Williams.

“If you like jazz, this is an extension of making joyful noise to the Lord,” said Ron Hope, 66, of Uniondale, a 40-year congregation member attending opening night with his wife, Harriet, a church board member.

The man behind the music is the Rev. Earl Y. Thorpe Jr., the pastor attempting to raise the profile of his brick church near the busy intersection of Stewart Avenue and Clinton Road.

“We’re trying to let the people in Garden City and the surrounding areas know that there’s a place to go on a Friday that you may not have thought about,” Thorpe said. Thorpe, appointed five years ago as the first African American spiritual leader of the 75-year-old, majority Latino congregation, wants to “celebrate the diversity of the church and build community through the power of live music,” he said.

A jazz fan himself, Thorpe introduced the band from the pulpit, inviting the audience to “dance in the aisles,” before taking a seat in the back row.

From Wall Street to the pulpit

“My philosophy is not to hit people over the head with religion,” said Thorpe, who took a roundabout path to ministry. He grew up in upstate Albany, where his family attended Metropolitan Baptist Church, a historically African American congregation co-founded by his grandmother. After getting a bachelor’s degree in politics and Japanese language in 1997 from New York University, he lived in Tokyo for two years, returning to New York in summer 2001 for a job as a New York Stock Exchange trader. A medical appointment kept him away from lower Manhattan on 9/11.

“On Wall Street I lived a certain life, and the Lord didn’t let it mesh,” Thorpe said. He attended the Union Theological Seminary in Manhattan from 2008 to 2011, getting a master of divinity in New Testament studies. “One of my [seminary] professors thought it was great that I was working on Wall Street because he thought I was going to save their souls,” Thorpe laughed.

He preached his first sermons as an associate minister at the Abyssinian Baptist Church in Harlem, the oldest African American Baptist church in New York State. He was working as an itinerant preacher at small area churches when Church-in-the Garden hired him to replace an interim pastor.

Thorpe still works 9 to 4 as a stock trader, dedicating nights and weekends to the church, which is part of the 5,000-congregation American Baptist Churches USA. He said that under his leadership church membership has “steadily increased” from 30 to 50.

From the start, Thorpe connected with young people in the congregation, said Barbara Wieder of Baldwin, a retired music teacher who serves as the church’s assistant treasurer, a volunteer position. “The kids would put down their cellphones and pay attention to his sermons,” Wieder said.

Stephanie Reyes, 27, of Uniondale, who recently joined the church and was baptized by Thorpe in August, volunteered to check tickets on concert night. “The church is very united. Everybody is invited to help out, nobody is excluded,” said Reyes, who attends services with family members from Guayaquil, Ecuador. The service is largely bilingual; Scripture is read first in English, then in Spanish, and it’s projected in both languages on a screen. Thorpe gives his sermon in English, and the choir also sings in both languages.

Thorpe said the Church-in-the-Garden is a “welcoming, come as you are, everyone is accepted” congregation that attempts to “minister to people who may be on the fringe of society.” The church partners with community organizations on voter registration drives and outreach to homeless LGBTQ youth. A part of that outreach, Five Towns Community Center Health & Prevention Services in Lawrence will be offering free HIV and hepatitis screening at the church on Nov. 2.

“This Jazz in the Garden series is literally about getting people to come and know about the Church-in-the-Garden,” Thorpe said. “Maybe they’ll come back on a Sunday and check us out.”

Jazz in the Garden