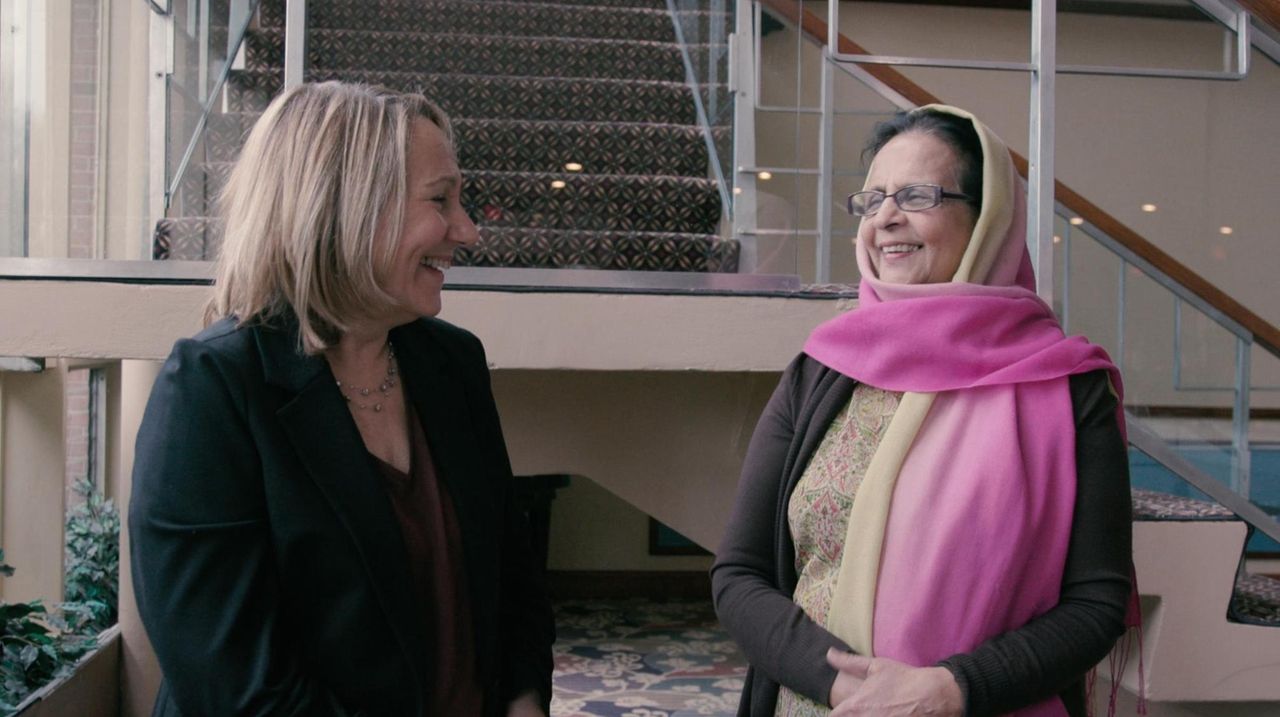 The Sisterhood of Salaam Shalom brings together small groups of between 15 and 20 Jewish and Muslim women who learn about each other’s faiths, carry out community projects and, above all, become friends. Credit: Newsday / Kendall Rodriguez

Shahnaz Mallik is a Muslim woman who wears a hijab head covering and has lived in Woodmere for 40 years. Despite that longevity, she says many neighbors won’t make eye contact with her.

It is that kind of sometimes unwelcoming atmosphere that led her to join a group of Muslim and Jewish women who are trying to break down barriers, erase misconceptions and fight anti-Jewish and anti-Muslim sentiments.

The group, The Sisterhood of Salaam Shalom, was founded in November 2013 in New Jersey. It has grown from six chapters with 60 members at its start to 170 chapters with 3,500 members spread across 34 states. Mallik’s chapter in Woodmere started in 2017 and has been followed by three more chapters on Long Island.

The organization brings together small groups of between 15 and 20 Jewish and Muslim women who learn about each other’s faiths, carry out community projects and, above all, become friends. They believe the small-scale, grassroots efforts eventually can have a major impact nationally.

“Getting to know Islam and getting to form relationships and friendships with Muslim women is a powerful way to fight hate,” said Lisa Kaplan-Miller, a Jewish woman who is another leader of the local chapter  in Woodmere. “There is so much ignorance.”

The group says its work is more important than ever in the wake of hostile rhetoric and violent attacks on Jews and Muslims.

They include an attack at a rabbi’s home during a Hanukkah celebration in Rockland County last week, an attack on a kosher market in Jersey City last month in which three bystanders were killed, and an assault on two mosques in New Zealand last March that left 51 people dead.

“Muslim and Jewish women are coming together,” said the group’s national co-founder, Sheryl Olitzky of Brunswick, New Jersey. “They are realizing that, number one, they are not going to put up with hate. They realize the power is in the relationship. Once you know someone and care about someone, there is no hate.”

The organization was honored recently by the United Nations with a U.N. Intercultural Innovation Award.

Kaplan-Miller, a social worker, said she became interested in the group after the last presidential election and what she called a rise in anti-Muslim sentiment.

“I was horrified by the whole concept of a Muslim ban,” she said, referring to efforts by President Donald Trump to restrict immigration from some predominantly Muslim nations he asserted were promoting terrorism. “I was raised in a home where you respected every religion. It didn’t occur to me to hate somebody because of their faith or where they came from.”

After she joined the Woodmere chapter,  members met monthly in one another’s homes and learned about each other’s religions. Kaplan-Miller admits she knew little about Islam, even though her children and some of Mallik’s relatives lived in the same community and attended the same public schools.

“I thought it was going to turn out to be something very different from Judaism, and it’s so not. We’re so connected,” she said. “We have the same value systems in so many fundamental ways. We have more similarities than we have differences.”

Mallik, a trilingual school psychologist originally from India, said she had a similar experience, as she attended a seder that the group arranged  and other activities.

The group has also visited a mosque in Woodmere founded in part by some of Mallik’s relatives.

A critical bonding moment came for the group in 2018 when Mallik organized a petition drive to have the Islamic holy days of Eid al-Fitr and Eid al-Adha declared official holidays in the local school district, as some other Long Island districts were doing.

She was met by vociferous and what she called “ugly” and “aggressive” opposition by some members of the community who spoke out against the proposal at a school board meeting.

The following week, some of the Sisterhood group including Jewish members along with some of their friends showed up at the meeting to support the Muslims.

“I was like in seventh heaven,” Mallik recalled. “I am blessed to have so many people who gave me so much support. I did not expect that.”

Kaplan-Miller said, “We didn’t want the ugliness to be representative of what our community is. We know there is something much more powerful that we had to share.”

The proposal did not go through, but Mallik and others felt tensions were calmed somewhat.

On a national level, the group has organized trips to take members of both religions to sites such as the Auschwitz concentration camp in Poland,  the Lorraine Motel in Memphis where the Rev. Martin Luther King Jr. was assassinated and the Edmund Pettus Bridge in Selma, Alabama, the site of the 1965 “Bloody Sunday” attack on marchers including Rep. John Lewis.

Kaplan-Miller, who went on the civil rights trip, and Mallik said they are hoping to open more chapters on Long Island, and that nationally the effort will slowly alter society.

“We want people to know that there is hope,” Kaplan-Miller said. “That there doesn’t have to be ugliness in the world. That there are plenty of good people who are looking to build peace and build bridges.”