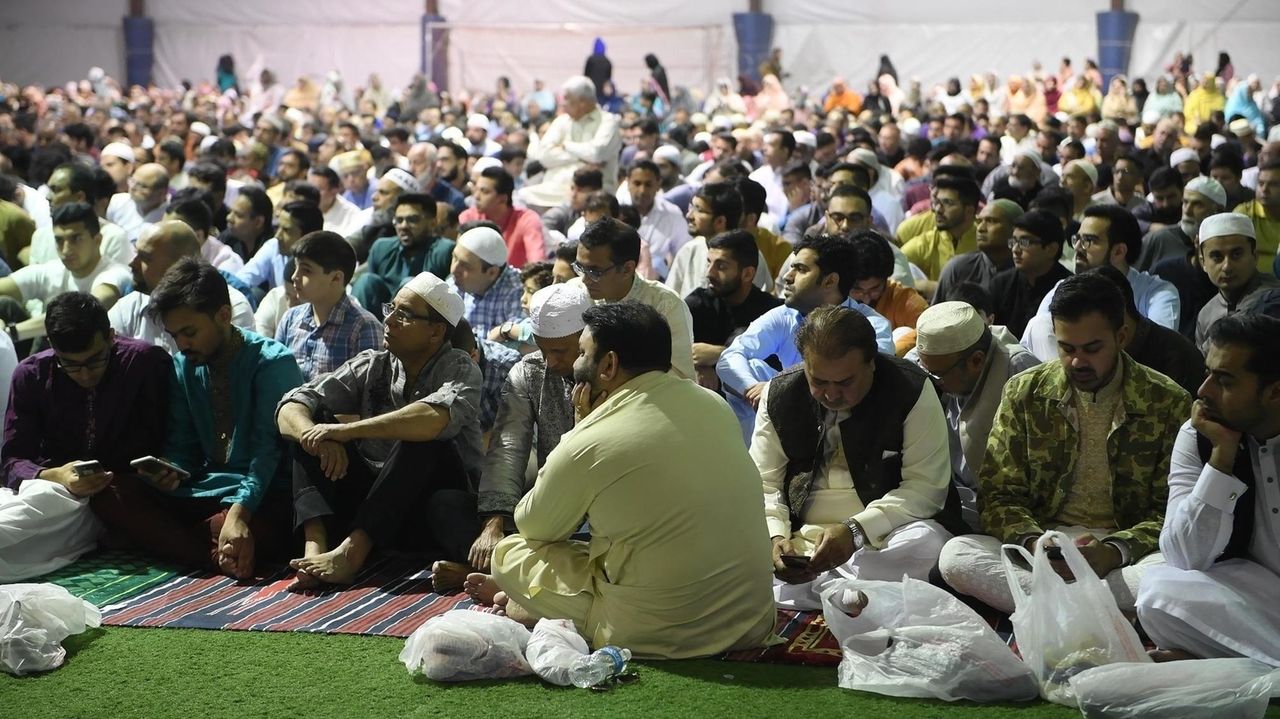 Thousands of Muslims gathered in mosques across Long Island on Friday as they celebrated one of the most important moments of the year, the end of Ramadan and its month of fasting during daylight hours. The start of the three-day Eid al-Fitr festival was marked by morning prayer services at mosques as the faithful dressed in traditional clothing and prepared for special meals at home with family and friends. Credit: Alejandra Villa/Jessica Rotkiewicz

Thousands of Muslims gathered in mosques across Long Island on Friday as they celebrated one of the most important moments of the year, the end of Ramadan and its month of fasting during the day.

The start of the three-day Eid al-Fitr festival was marked by morning prayer services at mosques as the faithful dressed in traditional clothing and prepared for special meals at home with family and friends.

At the Islamic Association of Long Island, a mosque in Selden, three services that started at 7 a.m. were packed. The crowds, reaching more than 1,000 people at the 8:30 a.m. service, overflowed out into a parking lot where organizers set up a tent, plastic tarps on the ground, and rugs on which the faithful knelt and prayed.

“I feel so happy. It’s really a great day for us to celebrate,” said Mohammad Javaid Akhtar, chairman of the board of trustees at the mosque and a chemistry professor at Stony Brook University.

After the prayer service, the faithful greeted one another with hugs and the refrain “Eid Mubarak!” or “Blessed Eid!” Then they enjoyed refreshments including coffee and doughnuts, before heading home.

At 73, Akhtar said he was able to endure fasting that lasted from about 3:30 a.m. until 8 p.m. every day for a month. Fasting during Ramadan — refraining from all food and drink during daylight hours — is one of the five pillars of Islam.

“With my age it was a little difficult,” he said. He also slept little, getting to bed about 12:30 a.m. after night prayers at the mosque, and then rising by 3 a.m. to eat a little before the first prayer of the day. After that he slept a couple of hours, and then went to his job.

The start of Eid al-Fitr is “a huge day for us,” said Dr. Isma Chaudhry, president of the Islamic Center of Long Island in Westbury, one of the oldest and largest mosques on Long Island.

“We end the month on a very high spiritual note, with the hope and the inclination toward internal peace, external peace and sticking to the code of ethics that we follow during the month of Ramadan, so that it stays with us for the rest of the year, at least, if not for the rest of our lives,” she said.

Ramadan, the holiest month of the year for Muslims, started May 15. During Ramadan, Muslims also are expected to perform acts of charity and service, engage in self-reflection, and focus on their spirituality.

The holy month commemorates the time when the prophet Muhammad received the Quran, the holiest book in Islam, from the angel Gabriel in the early 7th century.

Ramadan falling in late spring this year has meant as many as 16 hours of fasting because of the length of daylight each day. The dates of Ramadan move through the seasons because it is based on the lunar calendar.

Umar Syed, 20, a fourth-year pre-med student at Stony Brook University, said the fasting was relatively easy for him because he had his mind on other things, such as reciting from memory large parts of the Quran each night during prayer services before the congregation. He said he has memorized the entire 800-page holy book, which is written in Arabic.

Ramadan “makes you forget all the stress you had” such as exams at school, he said.

Some of the faithful noted how Ramadan helped bring people of diverse backgrounds together. The Selden mosque has congregants from more than 20 nationalities, Akhtar said, including Indonesia, Nigeria, the Philippines, Pakistan, India, Egypt, Mali, and Tunisia.

Long Island is home to an estimated 80,000 Muslims and more than two dozen mosques. With 1.8 billion followers — or about one-fourth of the world’s population — Islam is the largest religion after Christianity and is the fastest growing major religion.

Preparations for Eid al-Fitr began Thursday night and included women and girls applying special designs on their hands with henna. Many of the faithful spent weeks shopping for special clothing for Eid, with some ordering custom-fitted outfits and others shipping clothing from overseas.

Zain Imra, 13, of Miller Place, said he has begged his parents for years to fast fully during Ramadan. He did it this year except for a few days when he had school exams and his parents made him eat during the day.

Taking part in Ramadan by fasting “made me closer to God,” he said. “It’s an experience everyone should have.”