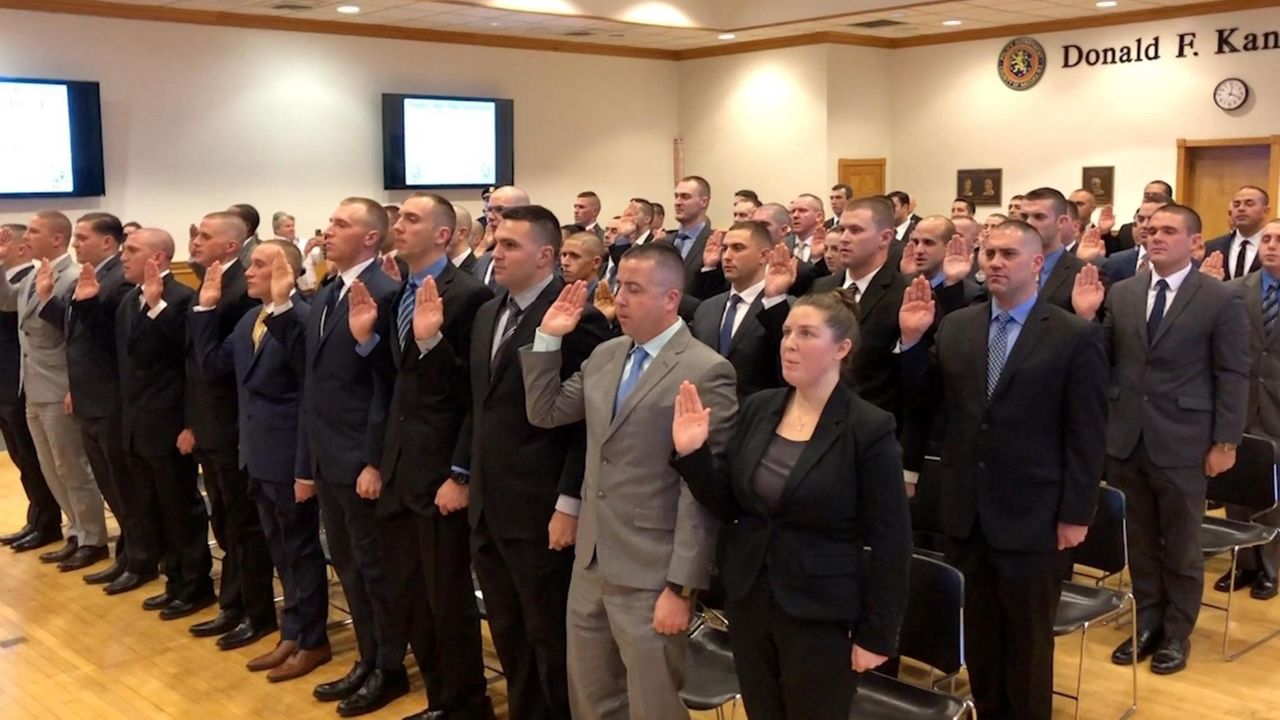 In Mineola on Friday, 65 new Nassau County police recruits were sworn in before the start of their seven-month training academy. Credit: Howard Schnapp

Sixty-five new Nassau County police recruits were sworn in Friday afternoon in Mineola before the start of their seven-month training academy.

The class is made up of 58 men and seven women, according to police spokesman Det. Lt. Richard LeBrun. Twenty-seven of the recruits have prior law-enforcement experience and one is a military veteran.

The recruits are coming to Nassau County “at probably the best time,” with crime at significant lows, said County Executive Laura Curran. Still, she said, “we are always looking to be more effective and more efficient.”

Curran said the county continued to fight the opioid epidemic.

“You will be part of that solution,” she said.

Curran also promised the recruits that step pay increases would be “guaranteed” no matter what happened with the county’s finances.

Police Commissioner Patrick Ryder said 15,000 applicants took the police test and these recruits were chosen. He cautioned the recruits that “right now starts the hard part” and told them that they would be held to a higher standard.

“If you want this job, you’ll do whatever it takes for the next seven months,” he said, adding the officers must treat the community with respect. “You will never tarnish the shield that you’re going to wear.”

The recruits include 50 white men and four white women, according to statistics provided by LeBrun. The class also has six Hispanics, three blacks and two Asians. Seven of the recruits are fluent in languages in addition to English.

With the addition of this class, No. 127, the force is comprised of 2,464 officers. The department graduated 151 officers from the police academy earlier this year.

The recruits must complete an intensive training academy before they begin patrolling Nassau County.

“My dream was to serve the community where I reside,” the Nassau County resident said after the ceremony, wearing an orange tie with blue stripes to match the department’s colors.

Bhalli was born in Pakistan and came to the United States in 1996. He moved to Long Island in 2007 and was an NYPD officer for three years before joining the Nassau police. He speaks Urdu, Hindi and Punjabi.

Connor Scott, 28, of Suffolk County, was a sergeant in the Marine Corps, serving as a military police K-9 officer doing narcotics work in the Philippines and on the U.S.-Mexico border. He left the military in May.

“I really feel I can take that edge to another level,” he said, praising the county’s current drug interdiction work.

Crystal Vargas, 24, of Suffolk County, has been working toward a law-enforcement career for years. Her mother is retired from the NYPD and her sister and brother-in-law work for the Port Authority Police Department. She graduated from LIU Post in Brookville with a criminal justice degree.

“I’ve been waiting for this moment ever since I was a little girl,” she said.

Port Jefferson Station housing gives former marine a home and a chance at 'serenity'
LIers could get hit with $35 toll driving in Manhattan
Can vaccine holdouts on Long Island be swayed?
'Moulin Rouge! The Musical' sashays home with 10 Tonys
CDC director: Booster shots were expanded 'to stay ahead of the virus'
3:52
Gabby Petito's father: 'Her nature was always to smile'
Didn’t find what you were looking for?