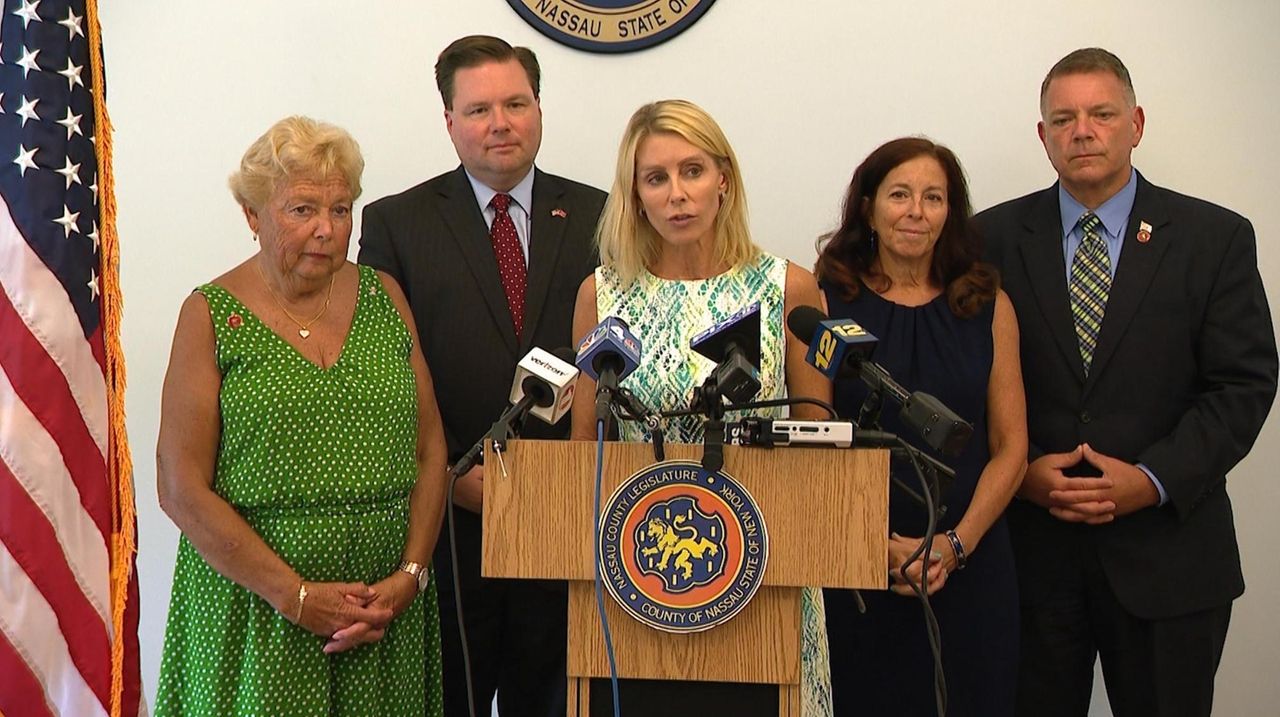 Nassau County legislators on Monday called on Gov. Andrew M. Cuomo to sign legislation regulating the chemical 1,4 dioxane and asked for state grant money so Long Island water districts can purchase the technology to enable them to meet strict new water quality standards by next year. The county Legislature held a hearing Monday night in Mineola on the regulation of the chemical, which is found in household cleaning products such as detergents and shampoos and, long term, can cause kidney and liver damage. Credit: News 12 Long Island

In a public hearing Monday night in Mineola lawmakers, environmental advocates and water officials spoke about cost and timeline challenges of removing the 1, 4 dioxane from water wells on Long Island. The chemical is found in household cleaning products such as detergents and shampoos and, long term, can cause kidney and liver damage.

Legis. Laura Schaefer (R-Westbury), chairwoman of the county legislature's Planning, Development and the Environment committee, said lawmakers are concerned that without federal or state funding, the cost of treating 1,4 dioxane would get passed on to water district customers.

"We just want to make sure that the state and the federal government are working with us so that it's not a tremendous impact on the taxpayer — it's important to us here in Nassau County where we pay very high taxes," Schaefer said.

Hicksville Water District Superintendent Paul Granger said they are looking to implementing the technology to remove 1, 4 dioxane from their wells before the state standards are in place. The estimated cost is about $60 million for 10 wells where the chemical has been detected. The district receiving a $3 million grant, he said, and will pass the rest of the costs onto water customers.

"This lack of funding would force our district to raise water and tax rates more than 80 percent, respectively," Granger said. "We hold the product we serve to the highest standard, and as such will not provide our residents with water that does not meet the federal or state standards."

The chemical is more prevalent in Long Island’s water than anywhere else in the state and far exceeds the national average, according to a federally mandated survey of emerging contaminants.

Adrienne Esposito, executive director of Citizens Campaign for the Environment, said she understands the cost problem for water districts and ratepayers but "let's not lose site of the compelling issue here."

"We have to get a cancer-causing contaminant out of our drinking water," Esposito said.

The state health department identified 89 wells statewide — 82 of them on Long Island — where 1,4 dioxane was found at concentrations higher than 1 part per billion, the maximum level recommended by a state drinking water quality council panel.

A bill regulating 1,4 dioxane passed the State Legislature and awaits Cuomo's signature. It would ban the chemical in household products by the end of 2022. The manufacturing industry has fought the bill's passage saying it would result in the removal of many popular products from store shelves.

A state spokesman said the governor is reviewing the bill.

Every member of the Nassau County Legislature supports the governor signing the bill.

“I am pleased that the Nassau County Legislature is unified in its call for Governor Cuomo to sign this law mandating the removal of 1, 4 — dioxane from personal care products. By banning the use of this harmful chemical, we can make great strides in our efforts to remediate Long Island's precious drinking water and protect public health," Legis. Debra Mulé (D-Freeport) who's office sent a letter to the governor.