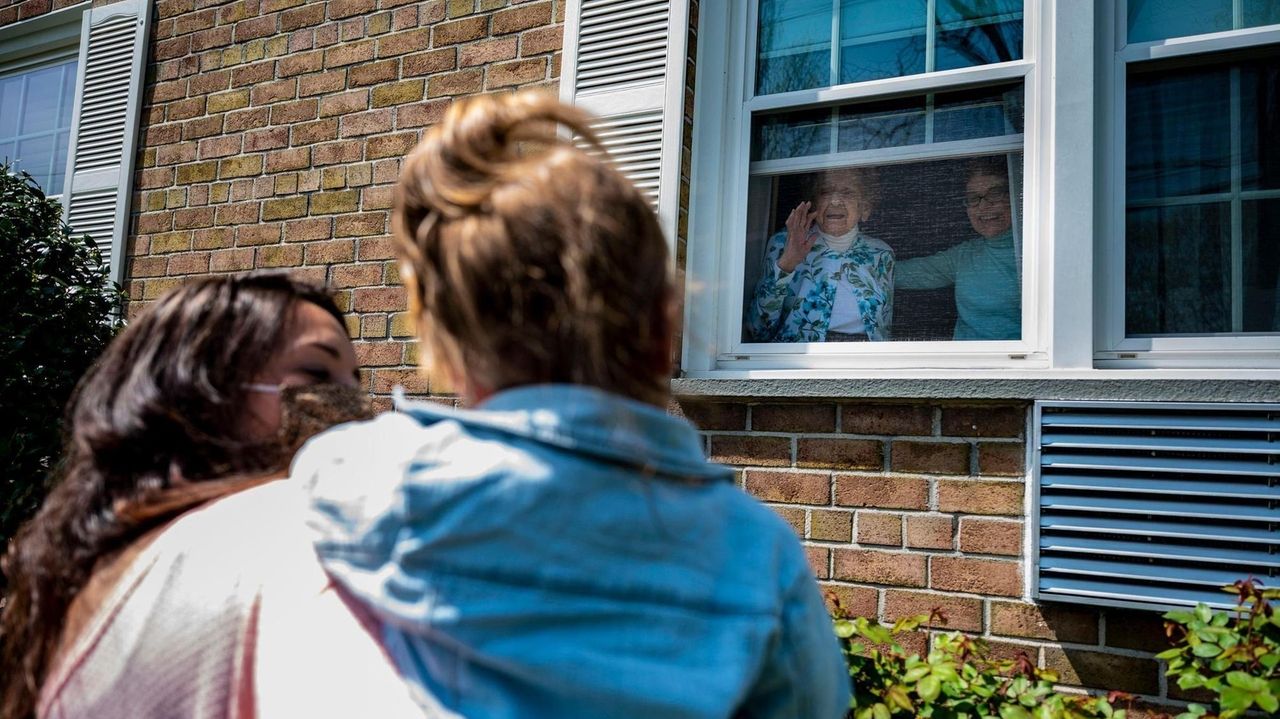 Sister Francis Piscatella of St. Dominic of Amityville, who entered the order in 1931, was treated to a socially-distanced celebration of her 108th birthday on Tuesday.   Credit: Newsday / Alejandra Villa Loarca

Jeanne Brendel wasn’t the only student inspired to become a Catholic nun by the grace, humility and perseverance of her geometry teacher.

"I was aware that she had one arm, and I’m sitting there watching her teach, using a compass on the blackboard and making this humongous circle, and I’m awed by it," Sister Jeanne said of Sister Francis Piscatella, her teacher at the all-girls Dominican Commercial High School in Jamaica. "I’m thinking, ‘I couldn’t do that with two arms!’"

Sister Jeanne is 92 and became a nun 70 years ago. Her inspiration Sister Francis of the Sisters of St. Dominic of Amityville, just turned 108 on Tuesday.

Sister Francis was feted April 20 from the window of her East Williston apartment as well-wishers bid her a happy birthday.

"When Sister Francis entered the order in 1931, Herbert Hoover was president and the George Washington Bridge, which connected New York to New Jersey, had just opened," said Lena Pennino-Smith, a spokeswoman for the Sisters of St. Dominic of Amityville.

The number of religious sisters has declined steadily over the past half century, as have the number of seminarians and priests, according to the Center for Applied Research in the Apostolate, which is affiliated with Georgetown University.

The numbers also have declined locally for the Dominican Sisters: In 1965, there were 1,725. Now, the number is 300, and that includes others in the metropolitan area.

Nearly 90 years ago, after Sister Francis had taken her vows — having been rejected by four other communities of sisters — while other Dominicans were sent to teach, she was held back due to her arm, which had been amputated when she was a child, according to Pennino-Smith's biography of Sister Francis.

"Although her teaching skills were proven to be exemplary — she had taught Sisters at the Motherhouse to help them earn their high school degrees — she was kept behind at the motherhouse," the biography said.

But when she filled in for a new sister who needed a break due to stress on a teaching assignment, she wowed the pastor, who urged that she stay.

She now lives with one of her former students — Sister Francis Daniel Kammer. The younger Sister Frances, who, along with Brendel, was sponsored by their former teacher to become nuns, now helps care for her.

Kammer said that Sister Francis wasn’t up for an interview after the birthday celebration.

In addition to high school, Sister Francis taught for 52 years at Molloy College, from which she retired at age 84.

Sister Jeanne recalled, Sister Francis never sought special treatment, completing the duties expected of a Sister of St. Dominic, even when the sisters would be tasked with scrubbing floors of the convent back in early the 1950s.