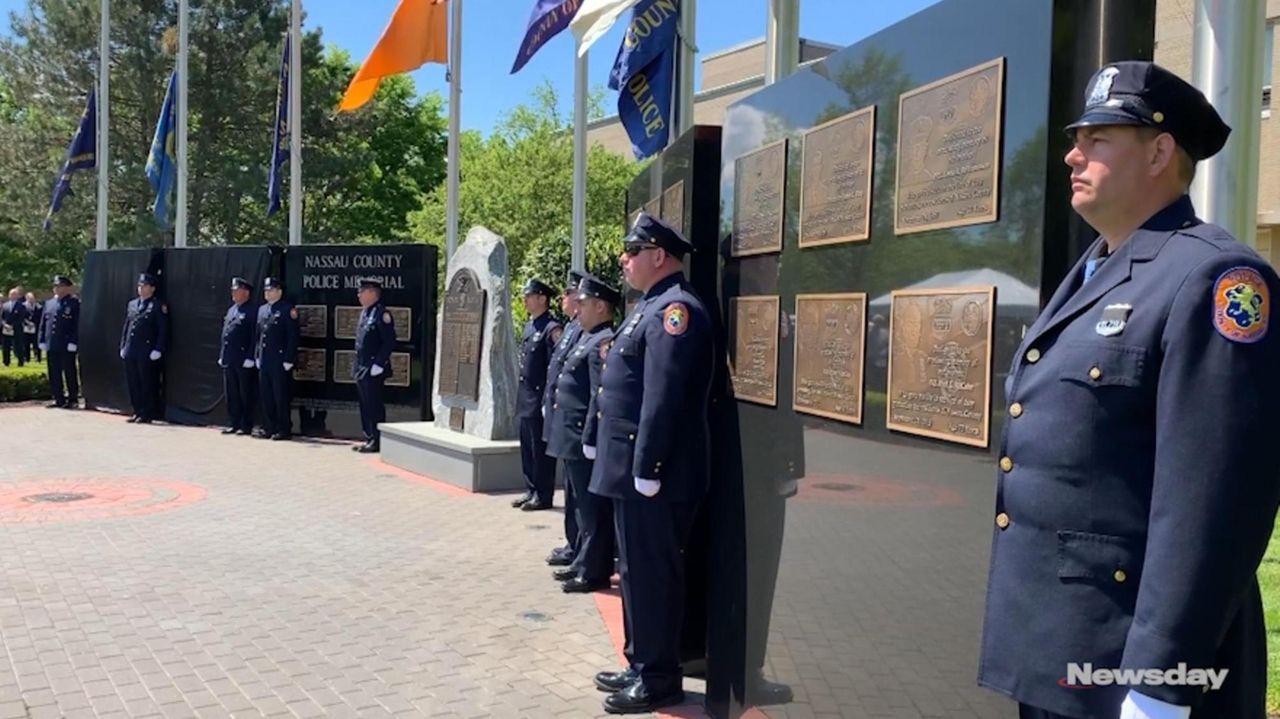 On Thursday, Nassau County Police Commissioner Patrick Ryder honored all deceased members of the police department and those who lost their lives to 9/11-related illnesses at a ceremony at police headquarters in Mineola.  Credit: Howard Schnapp

Nassau County Police Officers Peter F. Curran and James V. Quinn worked for weeks on the recovery efforts in lower Manhattan after the Sept. 11, 2001, terrorist attacks on the Twin Towers.

Curran, a 34-year department veteran and member of the Marine Bureau, helped ferry emergency workers around Manhattan on his police boat and worked at Ground Zero. Quinn, a longtime member of the Mounted Unit who retired after 32½  years on the job, also worked on the pile. They were two of some 400 officers the Nassau department sent into Manhattan daily after the attacks.

Both men died from 9/11-related illnesses, police officials said, and are the two newest additions to the Nassau County Police Department's memorial to officers who died in the line of duty. The two new bronze-cast plaques, which brings the number of police officers' names on the monument to 40, were unveiled Thursday at the department's annual ceremony to honor its fallen.

"He rushed in there," said Curran's daughter, Heather, as she stood near the memorial with her mother, Evelyn. "He went in there to help people that were stuck. He was a great man."

NYPD Det. Kelly Quinn of the 75th Precinct in Brooklyn attended the ceremony with his mother and the fallen officer's widow, Rose Quinn. "He loved his job," said the son. "He taught me everything I know about being a police officer."

Nassau Police Commissioner Patrick Ryder called for a moment of silence to remember the fallen officers, whose names were read aloud during the somber two-hour-long ceremony attended by hundreds of officers, their families and dignitaries, on the front lawn of police headquarters in Mineola.

"We thank them for the years of their dedicated service to this department, to our police family and to the people in Nassau County," said Ryder. "May God bless the memory of those we've lost and may he also protect all of those who continue to serve all of you today."

The memorial was first dedicated in 1982. Since then, it has grown from an original rock monument at the center to include six tall slabs of black concrete, with facial etchings of the fallen officers caste into bronze plaques.

The county executive said more must be done to ensure the federal government provides care for the emergency responders and volunteers afflicted by 9/11-related cancers and other illnesses. "The consequences of 9/11, even though it was 18 years ago, are not done," said Curran.

Heather Curran said her late father died from esophageal cancer caused, she said, from "breathing in the fumes at Ground Zero." Her father, she said, "would have loved" the ceremony.