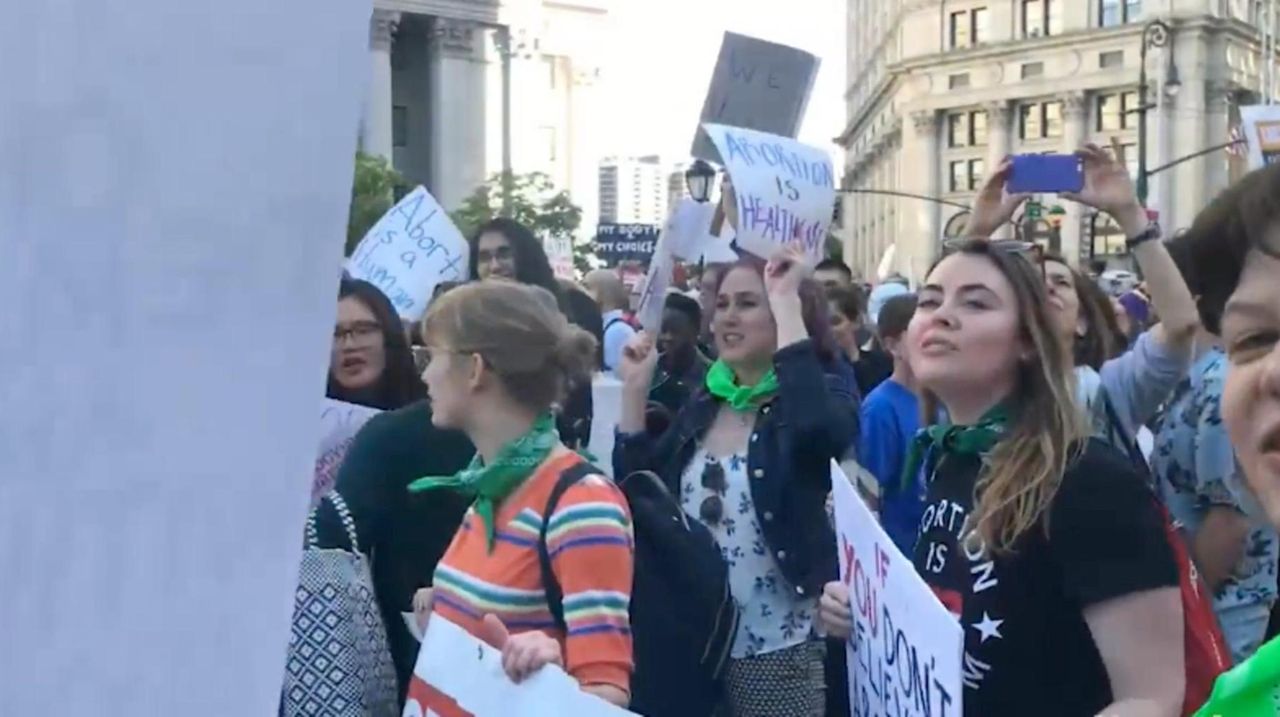 A loud group of abortion rights supporters gathered in front of the Nassau County Courthouse in Mineola Tuesday night with signs, slogans and a singular message: it's a woman's choice to decide what is right for her body.

About the same time in lower Manhattan, thousands jammed into Foley Square, to advocate for the continued legal protection of abortion.

The demonstrations mirrored similar rallies across the country Tuesday as part of the “National Day of Action to Stop the Bans.” The rallies were held in response to a near-total ban on abortion recently signed into law in Alabama as well as legislation enacted or nearing passage in Georgia, Kentucky, Louisiana, Mississippi and Ohio.

At the Mineola rally, Elizabeth Stack, of Rockville Centre, said the efforts across the Midwest and the South are nothing short of an assault on women's rights.

“We’re here to protect women," said Stack, who declined to give her age. "We’re here to make sure our daughters and granddaughters have the same legal rights to abortion as we have.”

Together We Will Long Island and Indivisible of Rockville Centre, a pair of political advocacy organizations, sponsored the rally that drew a crowd of about 150.

Demonstrators lined the street in front of the Nassau courthouse as early evening traffic whizzed by, many drivers honking their horns.

The legislation passed in Alabama and other states is widely seen as an attempt by opponents of abortion to get the United States Supreme Court to reconsider Roe v. Wade. The landmark 1973 high court decision legalized abortion nationwide. The bill signed by Alabama Gov. Kay Ivey made performing an abortion a felony in nearly all cases unless the mother’s health is at risk, with no exception for rape or incest. Governors in Kentucky, Mississippi, Ohio and Georgia have approved bans or are considering bans on abortion once a heartbeat is detected.

“Women have a right to their own bodies," said Sharon Golden, an organizer with Together We Will Long Island who attended the Nassau event. "Nobody has the right to decide what is right for them. The women and the doctor make that decision together.”

In Manhattan, a crowd well into the thousands chanted in support of abortion rights. City officials and activists criticized efforts to criminalize abortion, which was made legal nationwide more than four decades ago.

Gloria Allred, the longtime women's rights attorney with offices in Manhattan and Los Angeles, led the crowd in chants of “Resist, Insist and Persist!” Allred recounted having a pre-Roe abortion in the 1960s. After being raped in Mexico in her 20s, Allred said she had an abortion performed by an illegal practitioner in the United States and recalled being scolded later at the hospital by a nurse.

“We will never allow abortions to be criminalized again!" she shouted to the crowd.

Kate Krimsky, 43, of upstate Cornwall, said she had an abortion when she was 23 and now has one child.

“You can’t take my bodily autonomy for a fetus — for a cluster of cells,” said Krimsky, who held a sign depicting and anatomical drawing of a woman's reproductive system, with each part labeled with the word, "Mine."