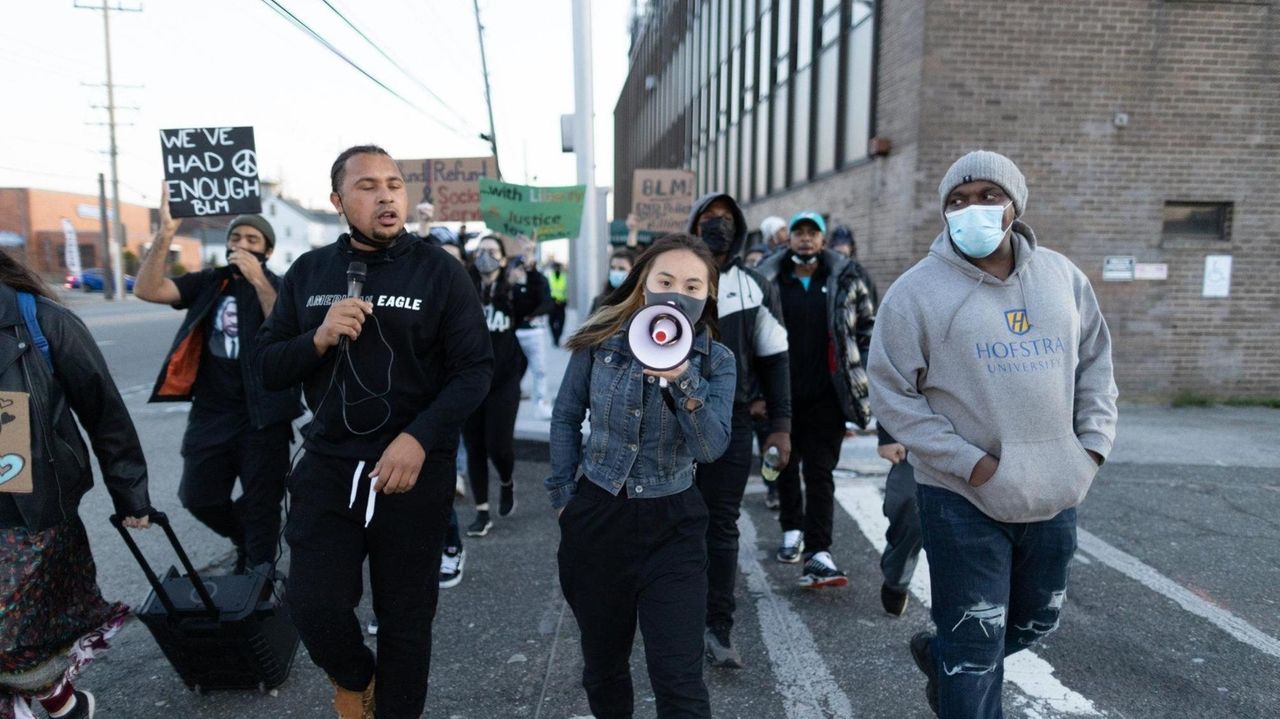 A march was held in Elmont on Friday evening for a Black and Asian solidarity rally in support of Nafiah Ikram, the premed Hofstra University junior who survived an acid attack in the front yard of her Elmont home. Credit: Kendall Rodriguez

A crowd of about 30 people gathered in a parking lot near Elmont Memorial High School Friday evening for a Black and Asian solidarity rally in support of Nafiah Ikram, the premed Hofstra University junior who survived an acid attack in the front yard of her Elmont home.

Sarah Ma, who is East Asian and grew up in Garden City, delivered an impassioned speech in which she said acid attacks on people of color and women of color "are all too common."

"It happened here in our own backyard but it’s not shocking," she said.

Ikram is now recovering mentally and physically from the March 17 attack which burned her arms, face and eyes. In a recent interview with Newsday, Ikram, 21, said she has difficulty with daily activities such as eating and brushing her teeth, even after spending two weeks in the hospital.

An overarching theme of the rally Friday was the solidarity between the Black and Asian communities. Some people at the rally wore "Black Lives Matter" shirts and carried posters that read "White Supremacy is Deadly."

Rally organizer Terrel Tuosto, who cofounded social justice activism group Long Island Peaceful Protests, said at the rally that Ikram’s attack being a hate crime "is not outside the realm of possibility."

"Anytime something like this happens, we should all rush over to show our support and see how we can lend a hand," he said. "How can you look at what happened to [Ikram] and not feel for her? Her life may never be the same."

Tuosto called on the community to band together in support of Ikram and fight "these evil powers."

Ma said what happened to Ikram is "disgusting" and "tragic" and said despite its still unknown whether the attack was a targeted one, "targeted attacks happen to people in marginalized communities all the time."

For Ikram, Tuosto had one message: "You’re going to be all right. No one can understand what you’re going through but we are here for you."

Acid attack survivor tells Newsday she's healingNafiah Ikram, 21, said she is recovering but has had difficulty with everyday activities since the attack. Nassau police are investigating, and the reward for information leading to an arrest is up to $20,000.   Nassau police offer reward for info on acid attackPolice said the victim, a 21-year-old Hofstra University student, was doused in March with a liquid that caused serious injuries.