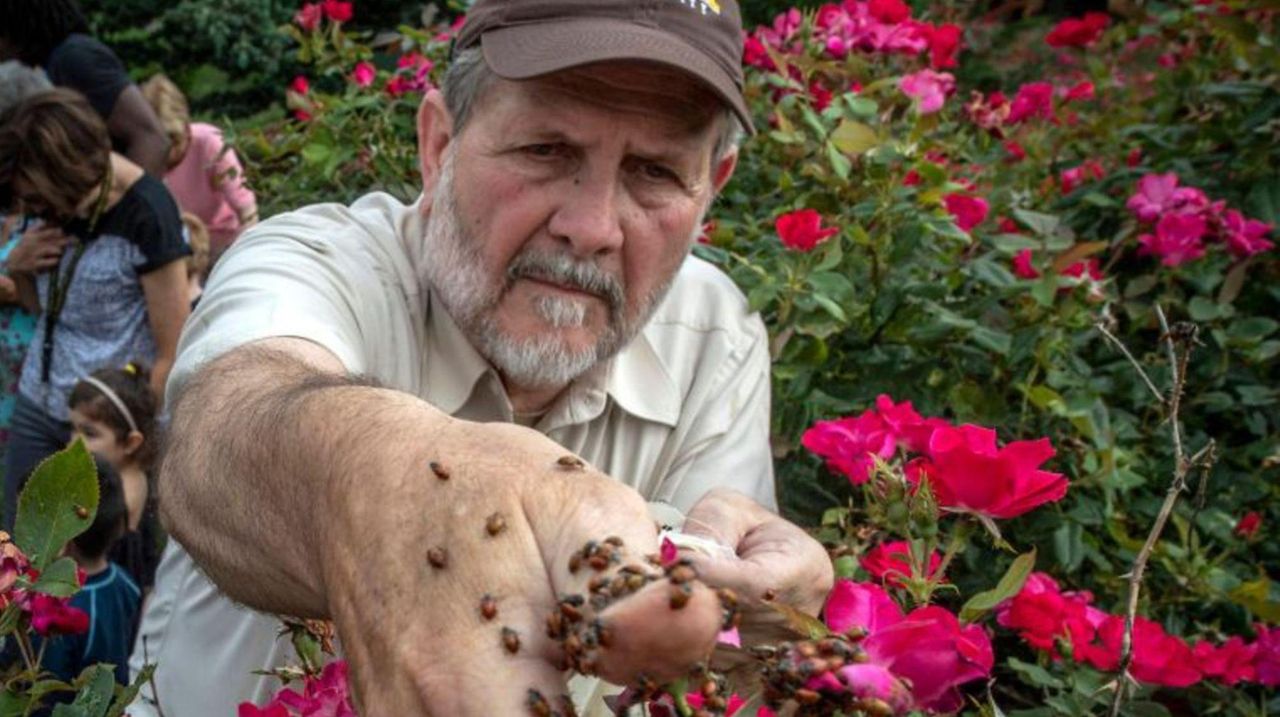 Adelphi University has done away with chemical pesticides, opting instead for an organic solution: ladybugs. The university’s ground crew released 18,000 of the spotted beetles on Wednesday to aid in ridding the Garden City campus of aphids, the soft-bodied insects that feed on plant sap, causing damage to the plants. The release was the fourth this season. Credit: Newsday / Raychel Brightman

Adelphi University has done away with chemical pesticides, opting instead for an organic solution: ladybugs.

The university’s ground crew on Wednesday released 18,000 of the spotted beetles to aid in ridding the Garden City campus of aphids, the soft-bodied insects that feed on plant sap, causing damage to the plants. The release was the fourth this season.

“The ladybugs are our biological control of the aphids,” said Bob Conaghan, Adelphi’s grounds crew manager and associate director of facilities management. “When they’re done looking for food here, they’ll just move out to the perimeter and then they benefit the neighborhood of Garden City after that.”

The 75-acre campus is a registered arboretum featuring a wide variety of flowers, shrubs and trees, some dating back to the early twentieth century, according to the university. The campus has used organic fertilizer and natural pest control for the past 15 years.

Ladybugs will control an aphid infestation in a tree within 48 hours and then move on to the next tree, Conaghan said.

A batch of 18,000 ladybugs costs under $50, while spraying one tree with pesticide could cost $200, kills beneficial bugs, and does not benefit the surrounding trees, Conaghan said.

"It’s just a matter of what’s safe, and what’s economical," he said.

The hope is that the bugs mate and stay, eventually eliminating the need to release so many, Conaghan said, adding that he's already found some ladybug families in some of the trees on campus.

The release Wednesday also served as a learning experience for students from the Alice Brown Early Learning Center on campus, though some students were braver than others.

Leo Careri, 4, of Garden City, ran away from the thousands of red and black bugs. When asked about them he replied, “They’re red!”

His brother Luca Careri, 2, let the insects crawl on him, said their mother, Kelly Fiore.

“I think any event where they’re touching nature, connecting with physical things, is so valuable in a digital world,” Fiore said.

John Allabashi, 5, of Garden City, was enthralled with the creatures, allowing dozens to crawl on him as he gently picked them off and put them on nearby leaves.

“It turns into a pupa then it turns yellow,” he said, referring to the stage before a ladybug becomes an adult.

The bugs crawled on his hands and arms, but Allabashi said he wasn’t afraid. Why? “Because they’re little,” he said before running off to find some more.