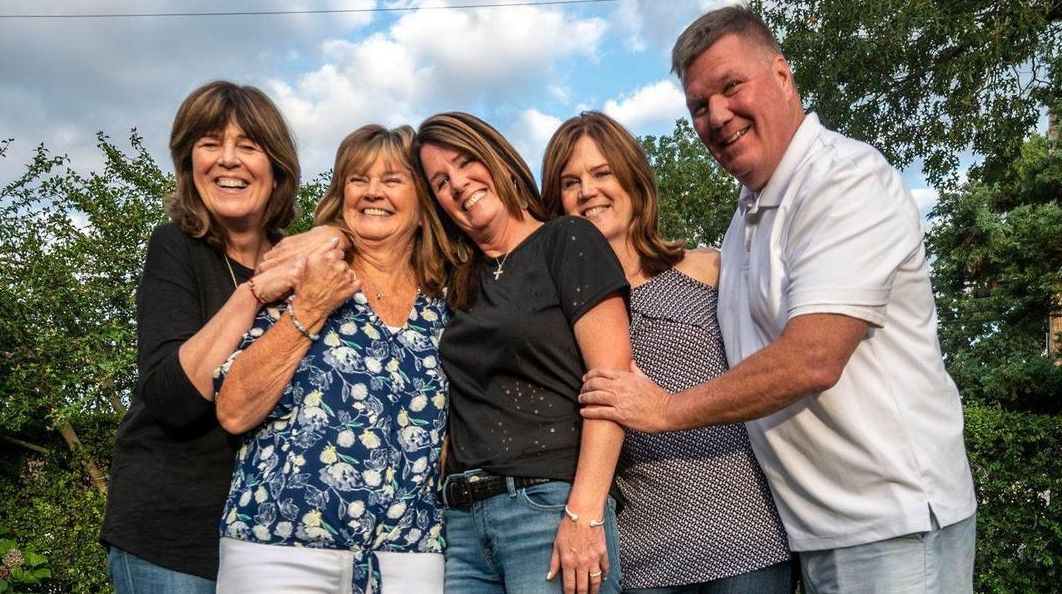 A woman from Massapequa Park, who was adopted at birth, took a 23andMe DNA test and found out she had five siblings, three of whom lived only blocks from her. Credit: Newsday / Alejandra Villa Loarca

Caryn McCabe is the oldest of five siblings she’s seen, cheered alongside and shared a ZIP code with who never knew she existed.

To know how that’s possible requires going back decades in time and then fast forwarding to the 21st century.

When McCabe, of Massapequa Park, took a DNA test two years ago she thought she’d learn about her heritage. Inspired by her son’s DNA test taken to learn about his roots, McCabe, 63, a retired schoolteacher, decided to take one, too.

"I wanted to find out how Irish I was," McCabe said.

According to the test, 100%, she said of the results from the private company 23andMe.

What — and who — she found was a lot more than her ancestors’ heritage. The test uncovered a bloodline that identified a first cousin, a connection that led to the discovery of McCabe’s younger siblings: four sisters and one brother who all live in Nassau County.

‘I thought she was just a cousin’

McCabe’s birth mother gave her up for adoption as an infant in 1958, and she grew up not knowing anything about her birth parents or other blood relatives.

'I didn’t want to rock the boat or do anything that would upset anybody.'

23andMe is one of several companies that offers genetic tests to show people information about their ancestry and health. The service includes an optional feature that can identify relatives, which McCabe said she selected.

She didn’t make any attempt to contact the cousin because she said she didn’t want to be a cause of upheaval in a family she knew nothing about.

"I knew I was adopted," McCabe said. "People out there know nothing about me. I didn’t want to rock the boat or do anything that would upset anybody. So that’s why I figured, let them come to me."

She grew up in Breezy Point, Queens, with adoptive parents and an adopted sister. Meantime, her birth parents had five more children they raised in Little Neck, Queens. The siblings grew up and moved to Nassau County to raise their own families, unaware that McCabe lived nearby, doing the same.

McCabe’s cousin made the first move, contacting her and asking questions about whether anyone knew who this person was.

"I thought she was just a cousin," said Eileen Connolly, 53, of Massapequa Park. "We were trying to figure out what the relationship could be."

John Kearns, 55, of Wantagh, decided to take a DNA test as well.

Driving home from Providence, Rhode Island, in early October 2019, Kearns got a text message that the results were in.

"I pulled over and it said that she was our sister," he recalled. "Thank God I pulled off the road. [Sister] Number five? I couldn’t believe it."

Their parents never told Kearns and the sisters he grew up with that they had had another daughter.

Later that month, McCabe met her brother and four sisters for the first time. When McCabe and her husband, Richard, pulled up in their car, Kearns said, "I went outside to Caryn and I said, ‘Let’s do some shots.’ "

They didn’t do shots, but the family did start to piece together their history.

Last year McCabe saw her pre-adoption birth certificate for the first time thanks to a state law passed in 2019 that gives adoptees the right to obtain a copy after their 18th birthdays. It identified her Irish-immigrant mother, Jane, by her maiden name McMahon but didn’t list her father, John Kearns.

The couple did later marry and have five children: John, Eileen, Denise, Tricia and Kathleen. Their father died before the reunion and their mother has dementia, which has meant they haven’t been able to get many answers out of her about why McCabe was put up for adoption.

The siblings speculate that their parents' strict Catholic families pressured the unwed couple to give up their child.

"Back then, not being married was a big thing," Connolly said.

"It must have been so hard for them to have to give up their baby for adoption ... they love kids," said Denise Bulva, 58, of Williston Park. Bulva said her father "has to be so happy" that the siblings have found each other.

There were more surprises in store for the reunited siblings. Three sisters live in Massapequa Park, another in Massapequa and the fifth in Williston Park. Two of McCabe’s daughters unknowingly spent a piece of their childhood with their cousins: One was in the same sixth-grade class as Tricia Hehir’s son, and another was on a soccer team with Kathleen Howard’s daughter.

Kearns said that his parents went to soccer games to see one granddaughter without knowing they were also watching another granddaughter, McCabe’s daughter.

Not all reunifications through DNA testing go so well, said Arthur Caplan, director of medical ethics at the New York University Grossman School of Medicine.

"There can be family secrets that people really are not comfortable opening up," Caplan said.

Another issue that can come up is that one person may consider DNA to be a defining part of their identity while another may put greater weight on shared experience.

"How much does genetics count in really thinking that we're family?" Caplan said. "You might say, ‘Hey, you’re my brother. That’s what biology tells me.’ But I might say, ‘You know what, I was adopted and I’ll tell you who my brothers are, they’re the people I grew up with.’ "

McCabe and her siblings said they had similar Catholic upbringings in working-class neighborhoods and a lot in common. McCabe's adoptive parents, who both died before the reunion, were a mix of Irish, German and Italian.

Over the past two years the brother and sisters, including McCabe’s adopted sister, have become close, going to two of their children’s weddings and are planning a trip to Ireland when the pandemic ends.

McCabe knows that not all families get the chance to reunite and be happy together.