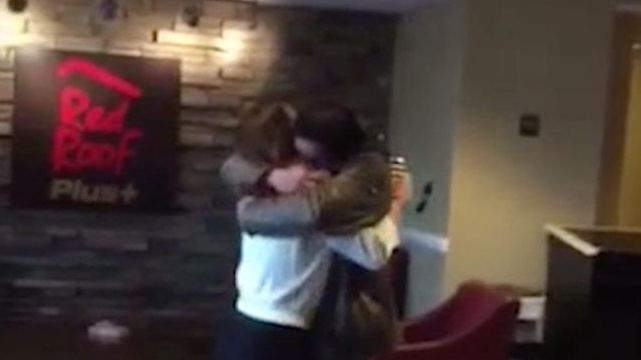 Lori Gertz, of Encinitas, California, and George Ghossn, of East Islip, have been pen pals for more than 40 years. But until April 11, the pair had never met. Gertz and Ghossn finally met face to face in Carle Place. The experience brought the friends closer together and got enough viral attention to spur weeks of interviews and another meeting in May. Credit: Courtesy of George Ghossn

When Lori Gertz met her husband two decades ago, she made one thing clear — George is part of the package.

For Gertz, of Encinitas, California, her friend George Ghossn, of East Islip, is like a close family member. They’ve shared every happy milestone and cried together over life’s lowest moments since they were children.

But until April 11, the pair had never met. That’s when Gertz and Ghossn, pen pals since 1975, met face to face in Carle Place. The experience brought the friends closer together and got enough viral attention to spawn weeks of interviews and another meeting for the pair in May, this time in California.

“It’s pretty humbling to be the good news story of the week,” Gertz said.

While they’ve found fame on the internet, Gertz, 54, and Ghossn, 56, spent much of their friendship communicating the old fashioned way.

“We met through a chain letter. You sent 10 letters and you’d receive thousands back, kind of like a pyramid scheme,” said Ghossn, who was 14 at the time. “I got three back.”

A 12-year-old Gertz, who was living in Massachusetts, didn’t fare much better — the only response to her chain letter, which she picked up at summer camp in upstate New York, was from Ghossn. She decided to write him back, using yellow smiley face paper and her signature loopy handwriting to see if he’d like to be pen pals.

“I’m quite nosy, ha ha ha,” Gertz wrote. “Did you get any letters from this chain thing yet?”

Soon, they were writing each other every other week. They’d use colorful paper, scraps, napkins, whatever was on hand. Every few years, Gertz would ask to meet up, but Ghossn always declined — the idea of meeting made him nervous.

“He was superstitious, he was afraid something bad would happen,” Gertz said.

Ghossn is not very tech savvy, he said, so the pair relied on paper until a few years ago, when he decided he was comfortable enough to create an email account.

Ghossn performed in musical theater and would send photos to Gertz. Gertz shared poems and wrote about her children and her move to California.

Their friendship grew deeper as they weathered personal challenges that began in the 2000s. For Gertz, it was when her family struggled to care for a child with physical and mental health issues whom they had adopted. For Ghossn, it was when his mother, and later his father and siblings, died.

“In 2006, I wrote her a letter on a napkin; I was on my way to bury my mom,” Ghossn said. “I was so distraught and I thought to let her know. She [Gertz] sort of realized we had this connection; that meant a lot to her.”

Finally, when Gertz asked again to meet up this year as she accompanied her son on a college visit to Hofstra University in Hempstead, Ghossn agreed it was time. They hugged each other for the first time on April 11, in the lobby of the Red Roof Inn in Carle Place, while a friend of Ghossn’s captured the meeting on a smartphone.

“It wasn’t until I laid eyes on him that I really, really processed that this was my George,” Gertz said. “My mind was so blown that the emotion didn’t catch up to me until a few hours after we left.”

When interest began to pick up in the story after they shared video and photos online, they reunited in California on May 2 for a round of interviews with media there. They looked back through all the letters and pictures and for the first time, everyone — Gertz’s family included — got to connect the names with the people they belonged to.

“She’s like my sister; we’ve grown up together, but apart,” Ghossn said. “We’ve written each other and lived our lives together, just not face to face. ”