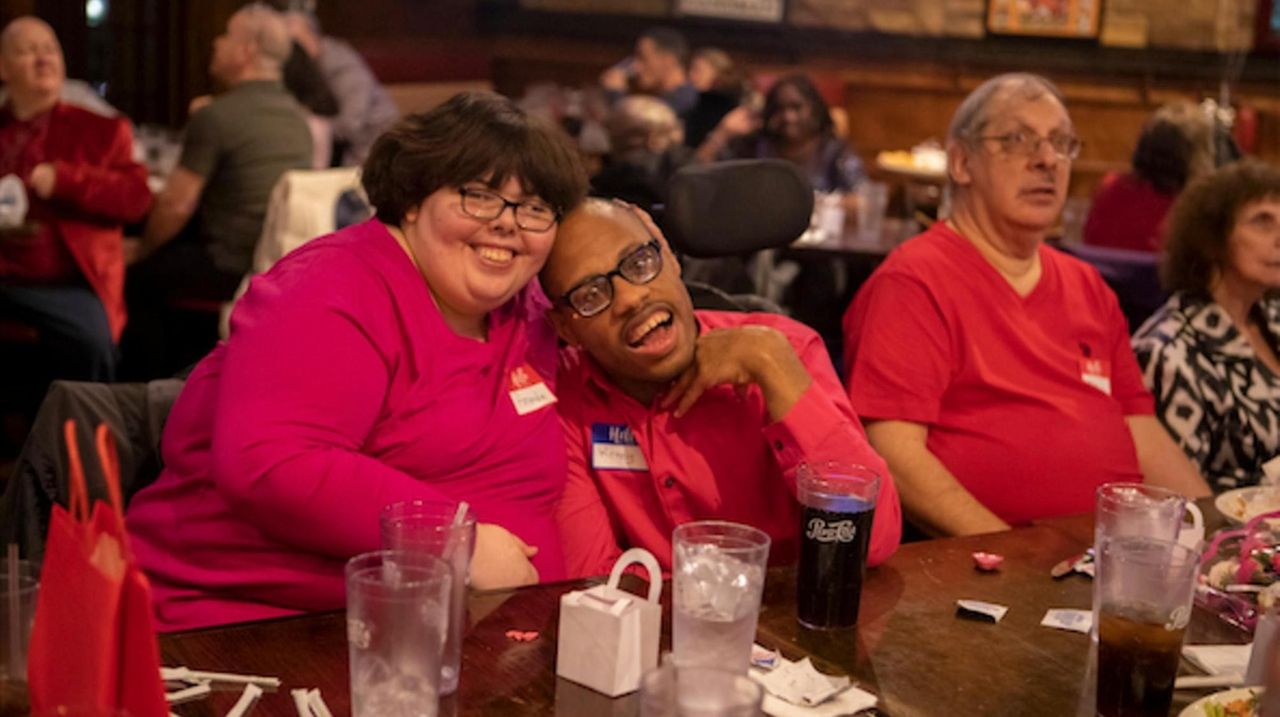 AHRC Nassau hosted an early Valentine's Day "Date Night" for people with intellectual and developmental disabilities Tuesday in Farmingdale. Participants received a lesson in the art of dating and romance from the group's socialization and sexuality specialist, Pam Boyle. Credit: Newsday / Shelby Knowles

Donald McKenzie and his wife, Robyn, have been each other’s support system in sickness and in health — literally. They’ve been married for three years and both struggled with health issues at different points in their relationship.

“We met in a washroom in East Meadow,” said Robyn Palumbo-McKenzie. “We were doing laundry and I was folding my clothes and teaching him how to fold.”

The McKenzies, of East Meadow, joined other couples, along with friends old and new, at AHRC Nassau’s eighth annual “Date Night,” held at The Main Event in Farmingdale on Tuesday night.

The Valentine’s Day event invited individuals with IDD — intellectual and developmental disabilities — to enjoy a hearty dinner, some sweet treats and bubbly conversation with friends and loved ones. Half of the venue was packed for the event, and nearly everyone wore their rosiest shade of red — including Palumbo-McKenzie.

“I was sick very badly and thanks to him, he’s my lifesaver who got me back to health and here I am,” she said. “And the rest is history.”

Now, they enjoy singing at karaoke together — her go-to jam is “Shallow” by Lady Gaga, while he usually opts to belt out a Tom Jones tune, “Delilah.” They giggled while recounting some nuptial mishaps. At their wedding, he accidentally placed his ring on her finger, and she cried so many tears of joy that her mascara ran down her face.

The celebration on Tuesday was hosted by Pam Boyle, a socialization and sexuality specialist at AHRC Nassau for the past 20 years. She said that the event’s first incarnation brought in “about 30 people,” and now the guest list has more than doubled.

For this Valentine’s Day event, Boyle says the goal isn’t necessarily for guests to find love.

“It’s just about feeling liked and happy and connected with other people, seeing friends, making some new connections maybe with the person sitting next to you,” she said. “Not everybody coming here is madly in love. People are coming looking for an opportunity to sit with a friend or a companion.”

The couples in attendance ranged from married to first date to close friends. And several couples had love stories to share.

Brian Kennedy and Barbara Payne have attended the event together as friends every year since the death of Vivian Lesnick Kennedy, Kennedy's wife and Payne's friend.

Why do they love this annual tradition?

“It’s great to see everybody and get to talk, and the atmosphere is great,” said Kennedy, of Wantagh.

“He invites me,” said Payne, who lives in Rockville Centre.

Engaged couple Josh Brown and Becky Mason attended Date Night for the first time together. They met through the Federation Employment and Guidance Service program.

“We had a wonderful manager and assistant manager and they saw how the two of us got along and knew that we were right for each other,” said Mason. “We basically started off as friends,” Brown said. “We always loved playing games and we had a lot of things in common.”

Now, Brown and Mason are making a long-distance relationship work; he lives in Cedarhurst and she lives in Deer Park. They rely on public transportation. To see his fiancee, Brown said he starts his journey by taking a bus — he uses Suffolk County Accessible Transportation or Nassau's Able-Ride — then a train and finally a cab.

Brown and Mason have been together for eight years, and their connection is palpable. They held hands throughout Date Night and finished each other’s sentences.

“It’s about the memories we can make together,” said Mason. “It doesn’t necessarily have to be February 14.”