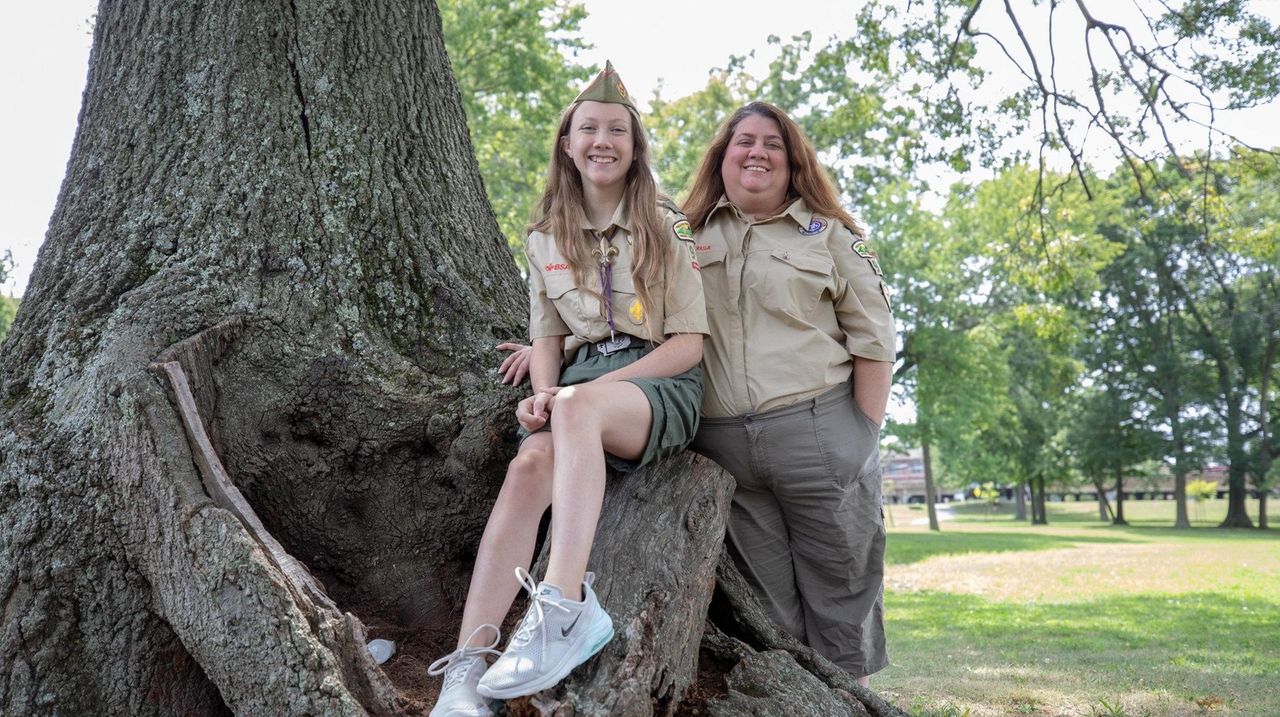 Gabriella Burke and her mother, Lisa Burke, formed Troop 99, an all-girl Boy Scout troop. The troop got its name from local inspiration “the Ninety-Nines” — a group of female-only pilots founded in Valley Stream in 1929 and headed by Amelia Earhart. Credit: Newsday / Morgan Campbell

Gabriella Burke, 11, was not ready to take "no" for an answer when she heard that her Girl Scout troop could not participate in this year's Camporee, a local camping event that she had previously attended.

So she found another way in — by becoming a Scout for the Boy Scouts of America and co-founding Troop 99, one of Long Island's 10 all-girl Scouts BSA troops.

The troop's name comes from local inspiration: The "Ninety-Nines," an all-female group of pilots led by Amelia Earhart and founded in Valley Stream in 1929.

For Gabriella's mother and fellow Troop 99 co-founder, Lisa Burke, the name represents groundbreaking women who are taking actions that may not have been taken by women in the past, she said.

Gabriella, who will be a seventh-grader at Memorial Junior High School in Valley Stream this fall, said the troop provides equal chances for girls and boys.

"I think that's fair because you can't just give opportunity to one person and don't give it to the other person who's wanted to do it for a long time," she said of the girls who had been anticipating the Camporee — a weekend-long camping trip that Girl Scouts had been attending the past 38 years.

The Camporee, which, in the past, hosted more than 400 Girl and Boy Scouts, is not a sponsored Girl Scout event, said Rande Bynum, chief executive of Girl Scouts of Nassau County.

"We pride ourselves in supporting a wide variety of programs, events, and one-of-a-kind outdoor and camping experiences for our girls in a safe, all-girl, girl-led environment," Bynum said, backing the organization's decision to prohibit the girls from attending.

Gabriella and her mother created a Change.org petition pleading to the Girl Scouts of Nassau County to reconsider their choice. More than 1,200 people signed.

"It's 2019 — girls should be able to do anything a boy can do," Lisa Burke said. "But they were standing firm to the ideals that girls and boys should not be doing anything together."

Troop 99 was formed in April, just months after the Boy Scouts became the Scouts BSA in February and began to welcome boys and girls. It is not considered a co-ed program, though, as only single-gender packs can be formed. More than 21,000 girls — 80 of whom are from Long Island — have joined nearly 2,700 Scouts BSA troops nationwide since then, Kate Jacobs of the BSA said.

As members of the BSA by the time the Camporee rolled around in early June, the Troop 99 Scouts, ages 11 to 13 and all from Valley Stream, made it to the event as the only female Scouts. They competed in cooking and spirit stick contests, and relay races with other Scouts.

Rebecca Sult, 10, who will be a sixth-grader at Woodmere Middle School this fall, joined Troop 99 after earning the "Arrow of Light," the highest rank in Cub Scouting, in May.

A Girl Scout before joining Troop 99, Rebecca reflected on some differences between being a Girl Scout and being a Scout for the BSA.

"Scouts BSA and Boy Scouts, they don’t really sell things — they help people," she said, recalling her times selling cookies as a Girl Scout. "[BSA] Scouts have been rescuing and helping people all over the world. Not just in America, but everywhere, and Girl Scouts don’t really do all those kinds of things."