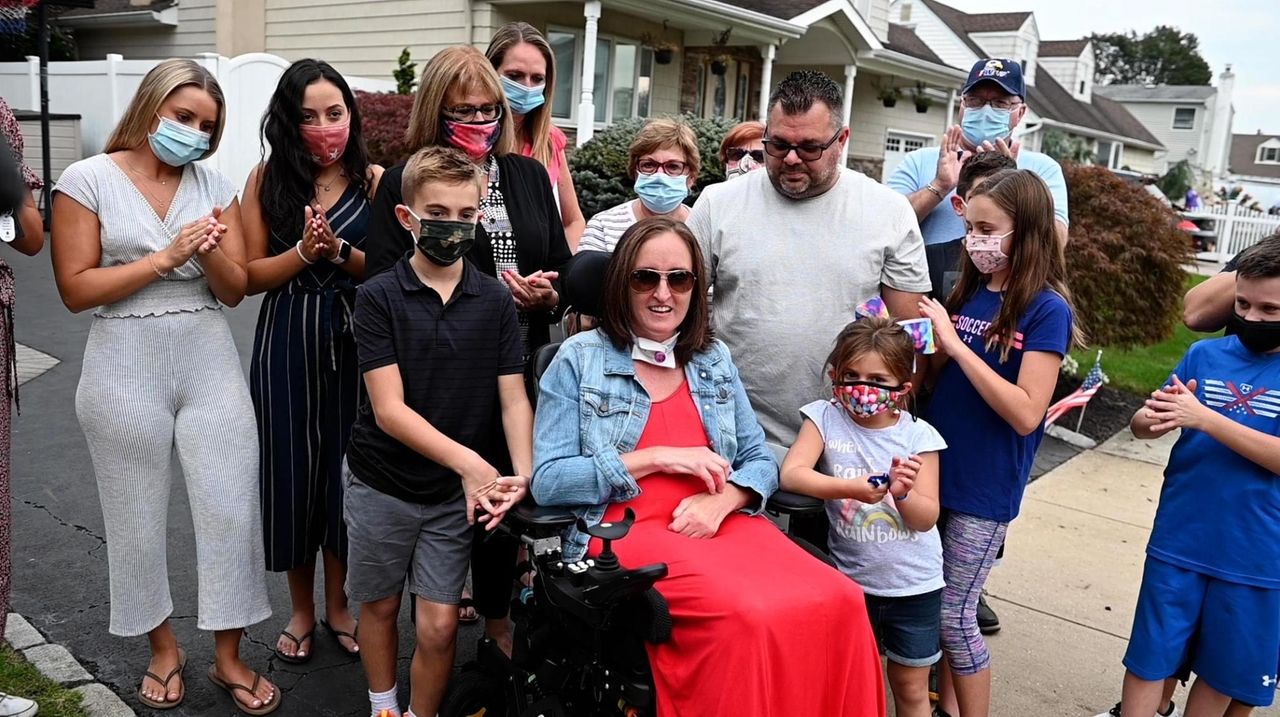 Serenading her with honking horns, music and a barking dog, a caravan of colorfully decorated cars circled Carly Colvell’s Farmingdale block Thursday, while signs and balloons were held up and words of encouragement were shouted toward the Northwell Health employee who was diagnosed with ALS last year. Credit: Newsday / Steve Pfost

A caravan of colorfully decorated cars circled Carly Colvell’s Farmingdale block three times Thursday, serenading her with honking horns, music and a barking dog while signs and balloons were held up and words of encouragement were shouted toward the Northwell Health employee who was diagnosed with ALS last year.

The "Care-A-Van for Carly" made up of her colleagues also included donations of baked goods and envelopes.

"My co-workers for the past year have really become my biggest fans and lifted me up in ways that I can’t even describe," Colvell said before the parade. "This isn’t just today; this has been a yearlong celebration of support and I’m so grateful."

Colvell, a mother of two children ages 5 and 9, worked as a program director in the clinical marketing department at Northwell Health headquarters in New Hyde Park for 12 years before her diagnosis.

For the past year, co-workers have been rallying around her, providing meals for her family and even raising enough money to send them to Disney World in January.

She recently returned from a six-week stay at North Shore University Hospital, where she had previously spent many days working alongside many of the people who were rallying around her Thursday.

Along with the celebration that Colvell is now back home, those co-workers, now friends, and her family would like to draw attention to the disease and the high cost of caring for an ALS patient. They have set up a GoFundMe account to help the family defray the costs of Carly’s round-the-clock care by nursing professionals.

"Being blessed enough to work in healthcare like all of us do and all of the team members, it gives you a certain take on the value of life and the value of living every day to the fullest," said Nicole Santos, associate vice president of clinical marketing for Northwell Health, and Colvell’s supervisor.

Santos, who has helped organize other GoFundMe accounts for the Colvell family, added, "Today we want to celebrate that and celebrate all that Carly has given to us in the way that we can, and that’s by showering her with love, and happiness and strength to conquer everything that lies ahead."

Carly’s husband, George Colvell, said they would like to see fast-tracking of ALS clinical trials.

"ALS is 100 percent fatal," George Colvell said. "There are some Phase 3 trials out there we want fast-tracked for the people who don’t have time before Phase 3 is finalized."

Colvell said she can’t express how much she appreciates her co-workers.

"When you are faced with a terminal illness, having people by your side is the most important thing," Colvell said. "Those people, you typically think they are family and friends, but in my situation, I found my co-workers are my family."

1:34
Pandemic-fed slowdowns limit what's for lunch at school
1:34
'Very limited choices': Pandemic impact forces schools to change cafeteria menus
District: Threat leads to searches of two Valley Stream schools, canceled homecoming events
Fauci: Pfizer COVID-19 vaccine could be available for children in early Nov.
Experts predict COVID-19 will be around for years to come
Man who died of Legionnaires', others hospitalized lived on same block
Didn’t find what you were looking for?