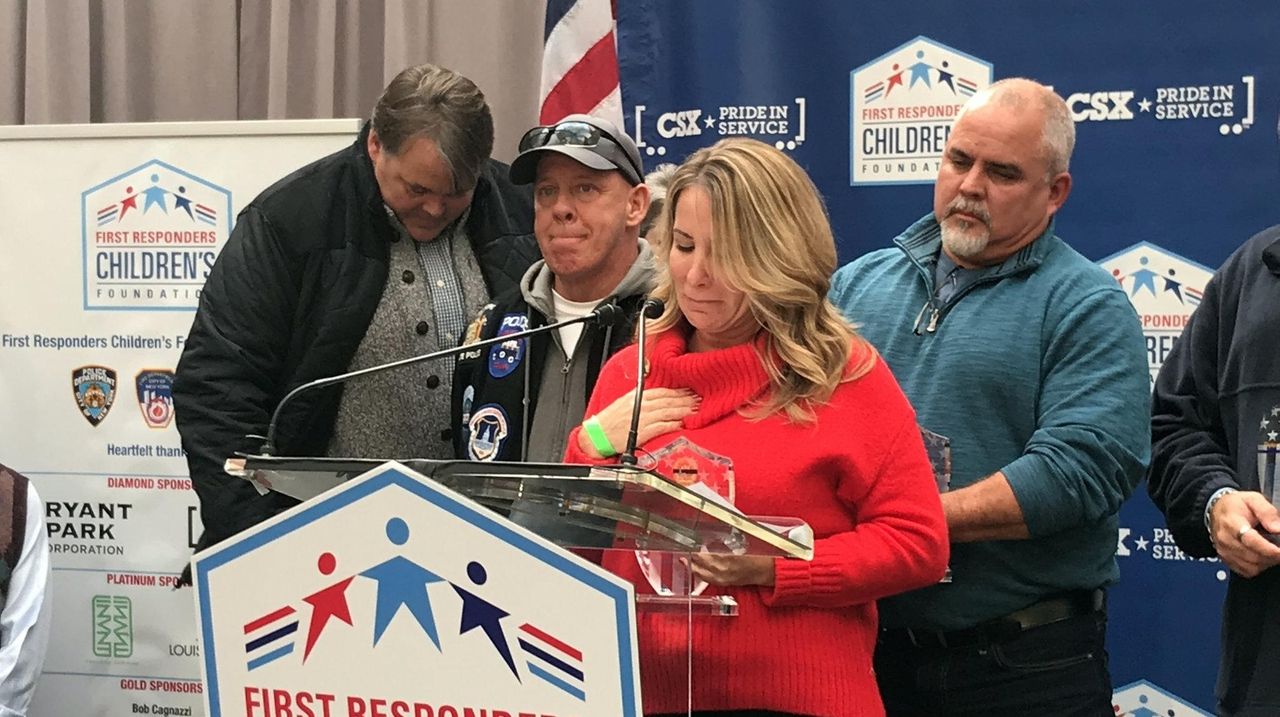 Children of 9/11 first responders sickened by illnesses from Ground Zero recovery work will be eligible for a scholarship in memory of hero cop Luis Alvarez.

The scholarship is named for Alvarez, the late, cancer-stricken former NYPD detective from Oceanside whose congressional testimony is credited with helping secure benefits for thousands of fellow 9/11 responders.

It is expected to cover up to $5,000 a year — $20,000 over four years — and start with the 2020 academic year, according to its organizer, the First Responders Children’s Foundation's president, Jillian Crane.

Alvarez’s widow, brother and other family were applauded by hundreds of fellow first responders and their families at a Thanksgiving Day breakfast in Manhattan, where they were honored with a plaque. Some at the breakfast, held at the restaurant at Bryant Park, had themselves lost loved ones.

“Lou wanted his legacy to stand for helping 9/11 first responders,” his widow, Alaine Alvarez, said through tears, adding: “Having a scholarship named after him will now help children of these families and is truly something that I carry — that we carry — his legacy in a way that our family appreciates."

Alvarez, 53, a father of three and former Marine, died June 29 of liver and colorectal cancer connected to his work at Ground Zero. Earlier that month, he testified in a televised appearance in Washington, D.C., about the $7 billion Sept. 11 Victim Compensation Fund amid congressional resistance to its extension. He testified with activist/comedian Jon Stewart, with both pleading to lawmakers to extend funding for first responders.

Speaking Thursday before guests at the breakfast, Crane cited Alvarez's words to Congress: "You made me come down here the day before my 69th round of chemo, and I'm going to make sure that you never forget to take care of the 9/11 first responders."

This summer, President Donald Trump signed legislation to replenish the fund, which helps people hurt while or who developed diseases after responding to the terror attacks. The money is due to last until 2090.

John Feal, a first responder from Nesconset who lost half of his left foot after working to clear rubble from Ground Zero after 9/11, said he and other first responders would continue their fight.

"You know, my life's been a documentary for the last decade and a half, but that brief moment that I shared with Louie is a Polaroid that's tattooed in my brain, and I've been blessed to know Louie Alvarez and cry with Louie Alvarez, and to have a scholarship in his name will mean that his legacy lives on, and it's something tangible that every year a first responder's kid will get a scholarship," he said.

James O'Neill, in one of his final public appearances before retiring as NYPD commissioner, said at the Thanksgiving Day event that the scholarship in Alvarez's honor was important for families who lost first-responder loved ones in the line of duty.

"He was a tremendous human being," O'Neill said. "All throughout his fight with cancer, he pushed one thing, and that's to take care of the people that responded to 9/11."

Crane said that students can apply for the scholarship — whose sponsors include freight train company CSX, luxury brand Louis Vuitton and Kay Jewelers — on the foundation's website. To be eligible for the scholarship, a student must be the child of a responder who is sick or who died from an illness related to 9/11. The scholarship, in Alvarez's name, is expected to be funded indefinitely, she said.

"We hope that their coming here together as a family will give them a little bit to soothe their sadness today on Thanksgiving," Crane said.