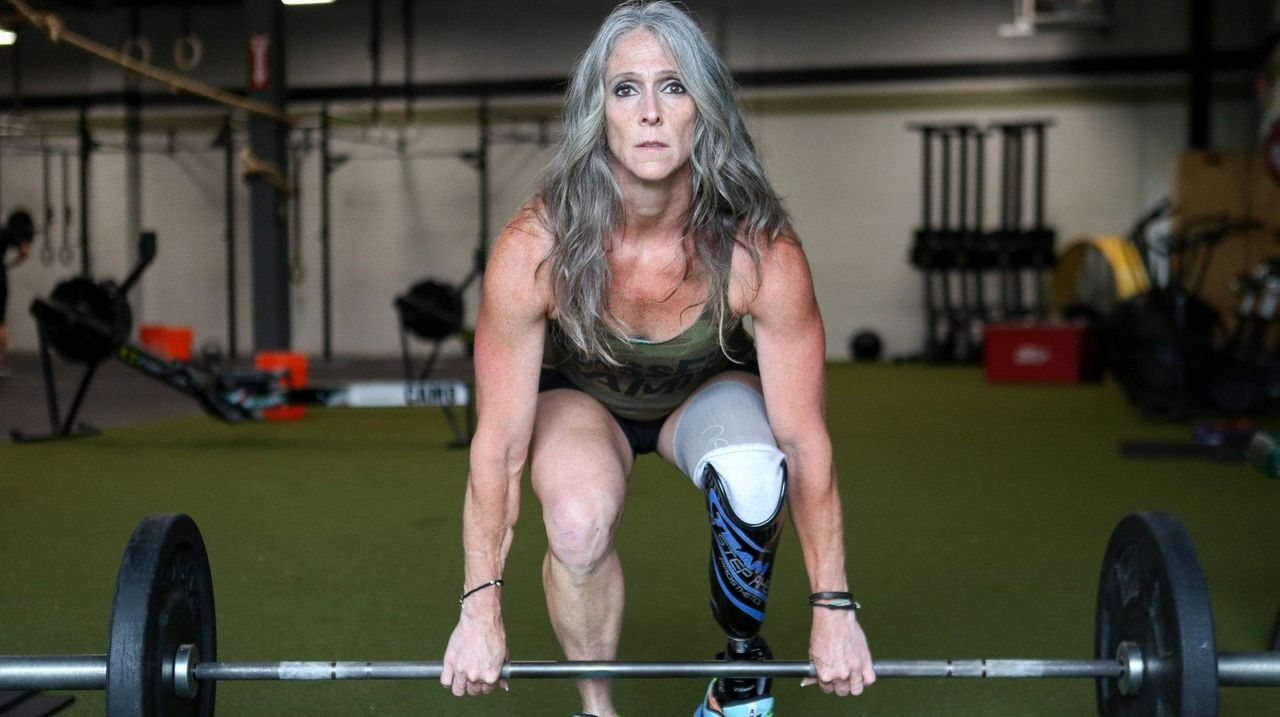 Amy Palmiero-Winters, an amputee from Hicksville, competes in the toughest endurance races in the world, including the upcoming four-day Spartan Agoge race in Namibia. Credit: Linda Rosier

On her second day of running through the Sahara desert in April, Amy Palmiero-Winters ripped the skin above her prosthetic limb.

“I actually tore a rather large piece of my skin off of my leg,” Palmiero-Winters, 46, of Hicksville, said. “I was in quite a bit of intense pain.”

She changed her mindset as she looked ahead to another four days of running through the dust and sand to get to the end of the Marathon des Sables, a 140.4-mile ultra marathon held in Morocco.

Running had been part of Palmiero-Winters' life before she lost her leg when she was 21 — and she never gave up. Today she's run more races than she can remember: "It's gotta be up close to the thousands."

In Morocco she had also ripped off four toenails on her right foot and was chased by a camel.

"The last thing I'm going to do is, is turn around and go home," she said.

She could not run a full stride but she crossed the finish line and returned to Long Island. Next week she’s heading back to an African desert for another test of endurance. Vermont-based Spartan Inc. is holding a grueling 60 hours of physical and mental challenges in the Kalahari desert in Namibia called “Agoge,” after an ancient Sparta military training regimen. The company's website says participants will be dropped off in the bush and forced to survive using traditional hunter-gatherer methods. .

“She’s the most inspirational person I know,” Joe De Sena, chief executive of Spartan said of Palmiero-Winters. “She's completely dehydrated. She's starving. She's broken. She's missing a leg. And yet she remains enthusiastic and positive and not just for herself, but she's the person that everybody else is leaning on cause they're all broken.”

Palmiero-Winters said growing up in Meadville, Pennsylvania, her father’s athleticism was foundational to her own as she ran and swam in school.

“It had to do with sports and just pushing past any barriers as well as breaking new ground,” she said. “Mainly, don't follow the leader and pave your own path.”

A motorcycle accident damaged her left leg, and eventually it had to be amputated below the knee. She returned to running after getting a prosthetic limb, but she said it was painful because it wasn’t designed for it. Years later, in Hawaii, she met another amputee athlete who told her “If you want the best, you have to go to Long Island.”

She headed to Hicksville-based A Step Ahead Prosthetics, where in 2005 she was fitted with a new prosthetic and began running marathons.

“It turned everything around for me because it allowed me to get back to that athlete that I used to be,” she said. She now works for the company as its chief operations officer.

To stay prepared for marathons and ultra marathons, she trains an hour a day at CrossFit CAMO, a gym in Farmingdale, “because it allows me to have an all encompassing strength,” and she runs short sprints.

She said running, enduring the Agoge and helping others with prosthetics share a common theme: teamwork.

“Everything in our life is about teamwork,” she said. “You might be the one up there accepting the award, but there's a whole army behind you helping you do these things.”

2:26 Forecast: High winds, sunny and very cold
Top photos from around LI, NYC from February 2021
Photos of the dayTop photos from around LI, NYC from March 2021
Virus positives below 4% as NY reaches COVID-19 one-year mark
2:07 Forecast: Overnight winds of up to 55 mph
0:56 Social studies group wants students to take history exams
Didn’t find what you were looking for?