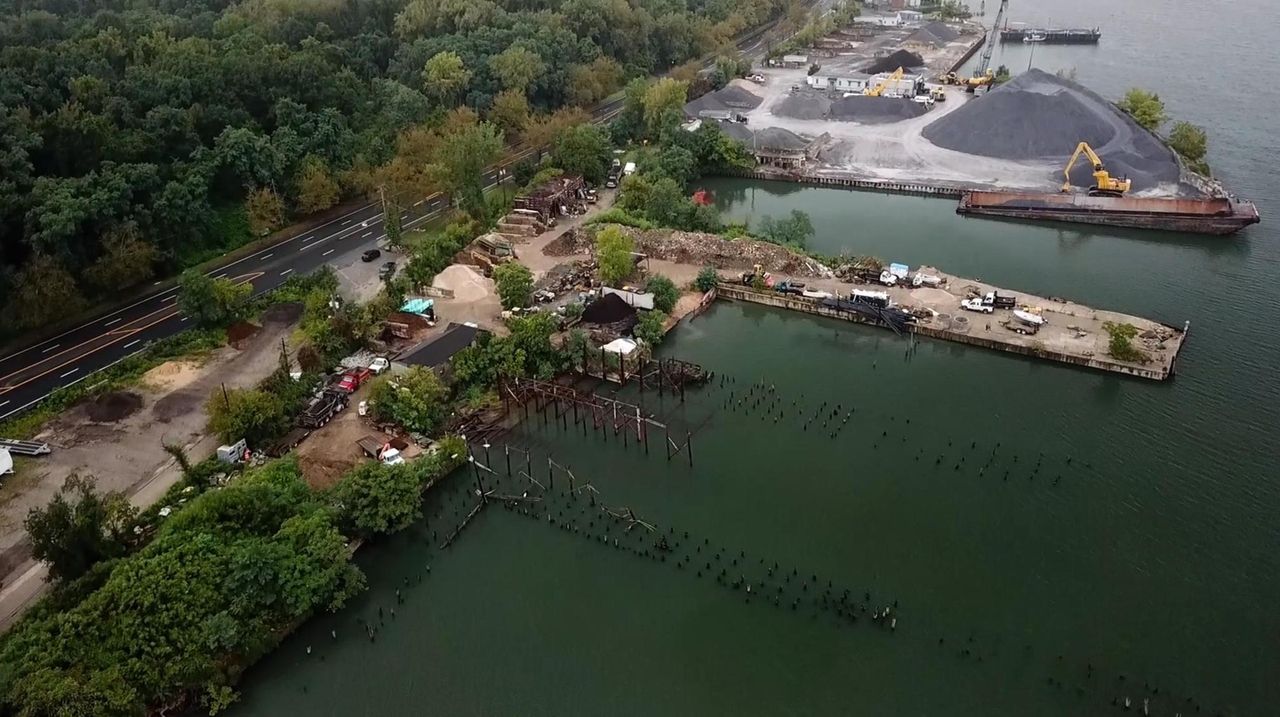 The site of a dilapidated pier and abandoned barges that once fed sand through Hempstead Harbor to build New York City skyscrapers may become the home of a new $120 million complex in Port Washington.

The plan calls for a 176-unit apartment building, a marina and a promenade.

"I’m going to be the first guy that’s going to be moving into one of those rentals," said restaurateur Anthony Scotto of Sands Point, who owns the seven-acre property that he and Nashville, Tennessee-based developer Southern Land Co plan to develop.

The parcel on 145 West Shore Rd. is home to a gravel company, three sunken barges and piles of garbage. The World War I-era pier there is littered with junk boats and discarded tires. Some edges of the pier have cracked and fallen into the water.

Scotto and Southern Land are proposing a cleanup to pave the way for the construction of a 55-foot-tall apartment building.

The company also has apartment complexes under development in Garden City and Hauppauge.

The planned building would include a mix of one-, two- and three-bedroom units on five residential floors on top of two parking levels, according to Southern Land. Monthly rent is estimated to range from $3,600 for a one-bedroom apartment to $11,000 for a penthouse.

"Part of the reason why the project we are proposing is fairly substantial is [because] it’s going to require a substantial project to offset the substantial environmental cleanup," said Dustin Downey, vice president of multifamily development at Southern Land. "It’s a pretty horrific blight both environmentally and visually."

The company estimated it will cost $8 million to $14 million to restore the pier, replace the sea wall, remove the debris and dispose of contaminated soil.

Southern Land also plans to build a 29-slip marina and a 12-foot-wide public promenade that connects the property with the northern tip of North Hempstead Beach Park, a town park that is scheduled to undergo major renovations.

If the plan goes through, it would mark the first time in decades the public could have access to the waterfront at the former sand distribution facility.

The project has been in discussions since 2016, but the company only submitted its application to rezone the parcel to North Hempstead Town on Nov. 9 to allow for the construction of multifamily residences.

Town officials and company representatives said there would be multiple opportunities for public comment.

"We do not come in and stuff a project down anybody’s throat," said Joe Rossi, the company’s northeast director of acquisitions. "We design a project in-house. We show it to [the community]. We say: ‘Hey, what changes would you like to see made?’ And then we listen. And then we make adjustments there accordingly."

Anne Kanarek, president of the Beacon Hill Residents Association, said residents in her neighborhood are still in the "fact-finding" stage.

"We don’t want to make any snap decision as to if this is a bad thing or good thing," Kanarek said. "We are in the process of just exploring what this will mean as far as changes in traffic patterns and changes in resources [to] the community."

Still, Kanarek said, "It’s only fair to give them the opportunity to make a case for it."