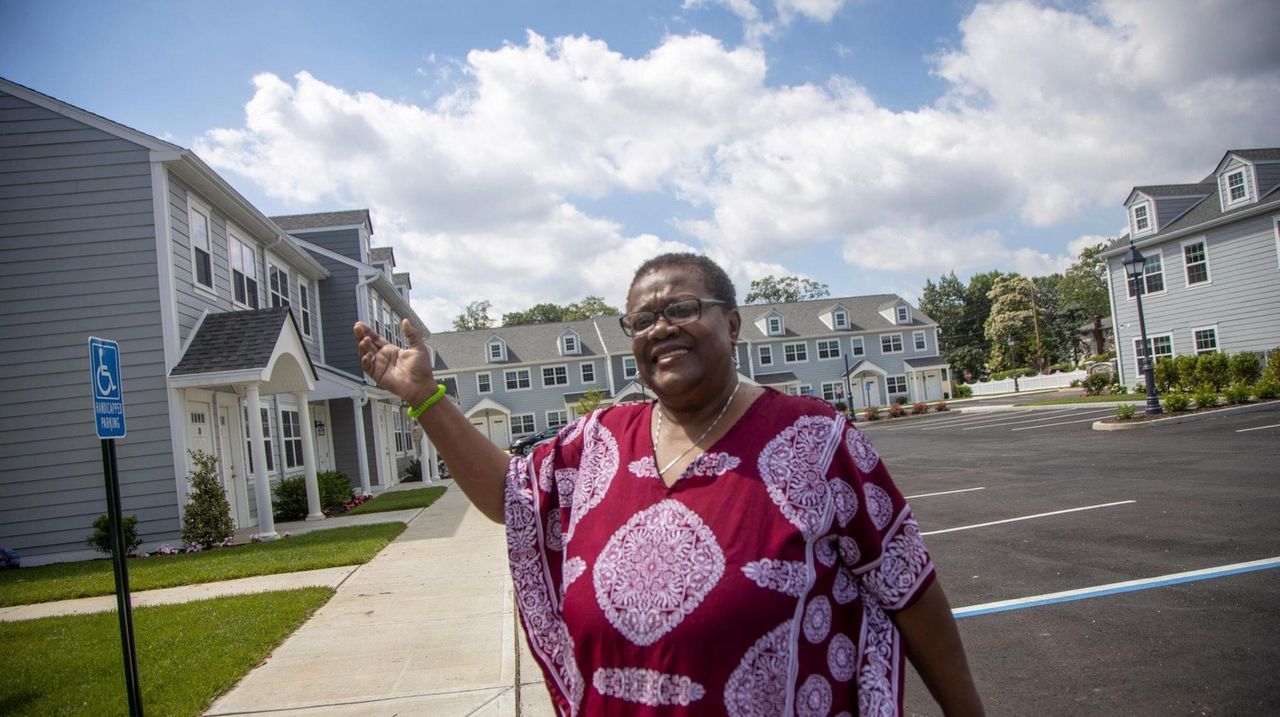 The Homestead Senior Apartments have opened in New Cassel. New resident Rosemary Hamilton on Sunday talked about her joy at having won the lottery and moving in. Credit: Howard Schnapp

The site of a former elementary school in New Cassel is the new home for dozens of seniors, marking the completion of an affordable housing project that has turned a once blighted neighborhood eyesore into new apartments for seniors.

The Homestead Senior Apartments at the corner of Grand Street and Broadway include 77 units for seniors who are at least 62 years old and make between 30% and 60% of the area median income, which was $124,000 for a Long Island household of four in 2019. To qualify, all household members must meet the age criteria.

Monthly rents range from $695 to $1,674, excluding a utility subsidy provided for each tenant.

“It helps out the most vulnerable of our population,” said North Hempstead Councilwoman Viviana Russell, who said that two decades ago her daughter went to the day care program at the site when it was a community center. “It’s heartwarming to see a piece of land be transformed from one good use to another good use.”

The Grand Street School building was built in 1926 and became a community center when the town deeded it in the 1980s to the nonprofit New Cassel United Community Center Inc. for youth and counseling programs.

Before the dilapidated structure was demolished in 2014, it sat vacant for more than a decade and was deemed a brownfield site. The Environmental Protection Agency awarded the town $200,000 for cleanup efforts, and remediation was completed in 2013.

Now six townhouse-style apartment buildings stand on the 2.23-acre land nestled in a residential neighborhood. It borders Magnolia Gardens, also an affordable housing complex for seniors, and is within walking distance to the Yes We Can Community Center and stores on Prospect Avenue.

“This was just a wonderful thing that we were able to take [down] this once crumbling brick shell of a school building that was standing here after decades of abandonment and … put up this beautiful [complex],” said Town Supervisor Judi Bosworth.

The town, which reacquired the site in 2012, transferred the land to the North Hempstead Housing Authority in exchange for easements on an adjacent parking lot and Alvan O. Petrus Park in Port Washington.

The first tenant moved in on June 1, and about 40 tenants with their family members have occupied three of the six two-story buildings, said Sean Rainey, executive director of the housing authority that manages the complex.

More tenants will move in this month, as housing authority officials coordinate a phased occupancy schedule amid a pandemic.

Since February, Rainey said the housing authority has received more than 700 applications. About 100 families are still on the waiting list for units intended for those who earn between 30% and 40% of the area median income. A few units remain available for households whose income falls between 50% and 60% of the median income levels.

Rosemary Hamilton, one of the first tenants, moved from Westbury to Homestead three weeks ago for the quietude.