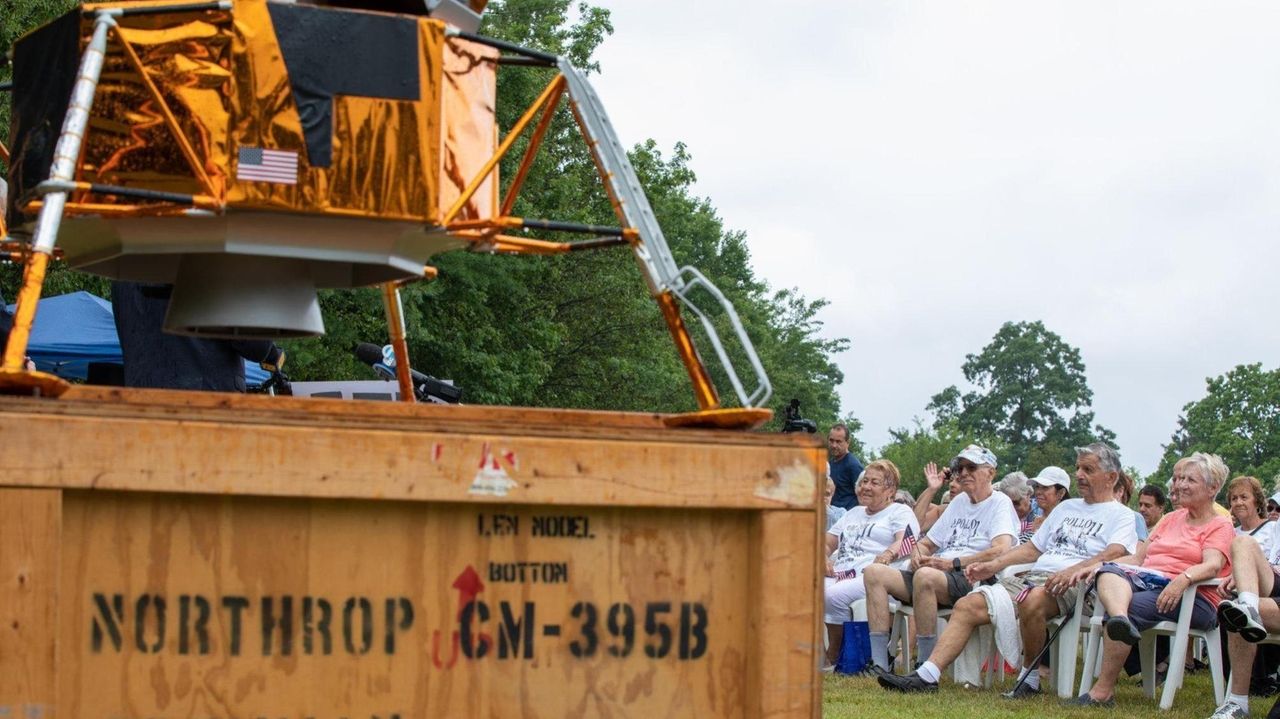 Oyster Bay Town Supervisor Joseph Saladino and the Town Board on Thursday hosted a celebration opening Apollo Park, renamed for the space program two days before the 50th anniversary of Neil Armstrong and Buzz Aldrin taking humanity’s first steps on the moon. The lunar module that landed on the moon was built at the former Grumman Corp.'s Bethpage facility. Credit: Newsday / Morgan Campbell

On the moon there is a plaque that says “Made in Bethpage, New York.”

The plaque is attached to part of the lunar module that was left behind by Neil Armstrong and Buzz Aldrin after they became the first humans to walk on the moon 50 years ago.

On Thursday, two days before the anniversary of that historic walk,  officials paid tribute to the men and women who built the lunar module, or "LM," at Grumman by naming  a town park and a road after the mission.

The 2.5-acre recreation site, on a former Grumman Corp. property and previously known as Park B 22, is now officially “Apollo Park.” The road leading up to it is now “Lunar Module Way.”

The lunar landing and walk “made worldwide news, bringing pride to America,” said Oyster Bay Town Supervisor Joseph Saladino. “It is wonderful to know that there is a vehicle on the moon that says, ‘Made in Bethpage, New York.’”

The newly renamed park is near the main former Grumman complex where the lunar module was built, which includes the famous Plant 5 — now converted into a movie studio.

The park is used mainly for PAL soccer games. Next door is a senior citizen housing complex called “Apollo.”

Lou Miritello, 70, who worked in the chart room at Grumman that kept track of progress on the lunar module, said he was happy with the park’s new name.

“I think it’s about time,” the North Massapequa resident said. The moon landing was “a monumental task that was never envisioned that they could actually do it, but then Grumman came through.”

Xenophon Caviris, 80, of Old Bethpage, said part of his job on the lunar module was fixing a strobe light above the door. Every time it flashed, communications got shut down because the light gave off radio waves, he said.

He was pleased with the park’s new name, but frustrated the Apollo program was phased out in the early 1970s.

“It’s a shame that the space program essentially shut down” soon after the July 20, 1969, moon walk, he said. “Think where we would be today if we continued.”

James Stefanich is now receiver of taxes for the Town of Oyster Bay, but he previously worked on the lunar module's communications systems. Now 74, he said the park naming was "overdue."

"This is quite a significant achievement and event in human history, and we should be designating these spots so no one forgets that it happened and it started here," he said.

Danielle Masztal attended the event partly to honor her late father, George Frank, who worked on the lunar module. He died last year, so when her daughter was born several months later, she gave her the names Louise Emily Masztal — or LEM abbreviated.

“We are so extremely proud to get to see this,” the Dix Hills resident said of the park.

Photos: A look back at the 1969 lunar landing

See the spacesuits, inside the Grumman facility, the crowds that gathered to look at the night sky and more stunning images from July 20, 1969.

Ham radio operators honor Apollo 11 anniversaryHam radio operators nationwide are taking to the airwaves over the next few days to mark the Apollo 11 lunar landing on July 20, 1969, and Long Island is no exception. 'Chasing the Moon': Powerful history of the Apollo program"Chasing the Moon" also establishes why we need to care about the moon landing all over again. LI Apollo 11 workers to speak at 'First Man' screening"First Man," starring Ryan Gosling as Neil Armstrong, won an Academy Award for Best Visual Effects.