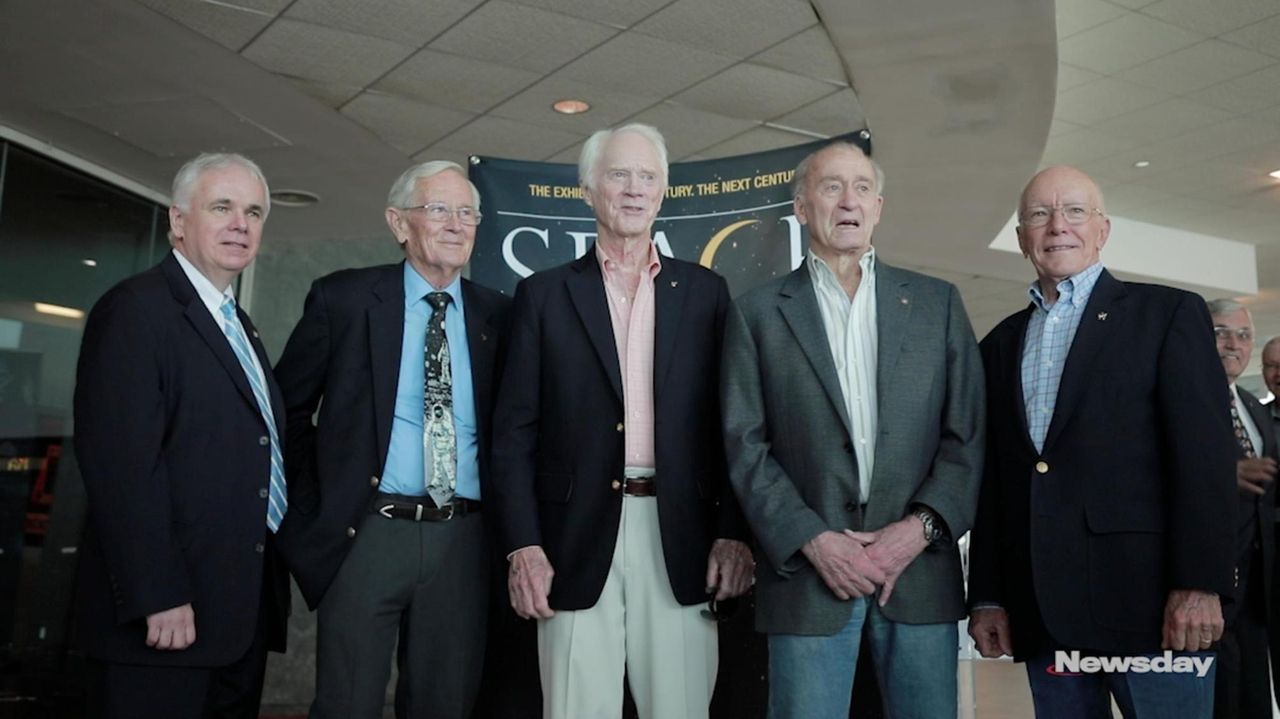 Seven men who played key roles in the success of the Apollo moon mission program were guests at the Cradle of Aviation Museum on Thursday.  Credit: Newsday / Yeong-Ung Yang

A handful of Apollo astronauts came together Thursday with Grumman workers who built the lunar module, taking a walk down memory lane that stretched across the cosmos.

They gathered to celebrate the 50th anniversary of the Apollo 11 mission that landed two astronauts on the moon in July of 1969. The great success of that mission rocketed the United States ahead of the Russians in the space race, and marked the first time that mankind traveled to another celestial body.

Held at the Cradle of Aviation Museum in Garden City, against the backdrop of an authentic lunar module and display cases filled with Apollo memorabilia, the event featured reunions of men who worked almost a half a century ago on America's space adventures.

Astronaut Fred Haise, now 85, smiled when he recognized Grumman electrical manager Frank Pullo, 86, who lives in Wantagh. Haise pointed to his head and commented how the two men, who had sat next to each other during lunar module tests, now had gray hair.

They recalled the long hours working side by side, their battles with designers of the tests, and such esoteric things as "one-time anomalies" — when something goes wrong and can't be explained.

"I had a police whistle I used to blow to stop the fights," recalled Haise, who worked at Grumman for a few years testing modules before he flew on Apollo 13 in 1970.

Pullo recalled that he had just driven home from another long day at Grumman on April 13, 1970, when he got a call telling him to come back in, that something terrible had happened to Apollo 13.

Haise, at the time, was traveling 200,000 miles from Earth, closing in on the moon, when an oxygen tank blew up and crippled the ship. The spacecraft shuddered, the oxygen pressure fell and the power went out.

Pullo came into Grumman and started working on a separate lunar module to try to help solve the problems up in space.

"They used the lunar module as a lifeboat," Pullo said. "We had never done that."

The two men recalled those tense moments, making sure the module's batteries had power, and the importance of conserving water on the spacecraft — "not for drinking but because it was critical for cooling the machinery," Haise said.

At times, they talked as reunited co-workers measuring the time that has passed — the people who've taken ill, the joy of seeing each other again and the memories that play in their minds like highlight reels.

For the Grumman workers, seeing the astronauts allowed them to revisit a golden era in the history of the Bethpage aeronautics giant, when it seemed as if everyone on Long Island knew someone who worked there.

"This is great," said Mike Lisa, 77, of Hicksville, whose job was to test the durability of the lunar module. Looking at the astronauts, he remarked, "When they talk about the right stuff, there is the right stuff."

For the astronauts, the day commemorated not just one Apollo flight but an era when America pushed itself to incredible heights.

Schweickart went from piloting a jet plane at about 1,000 mph to flying the lunar module at 17,000 mph.

"It allowed us to move out from our home planet for the first time," he said.