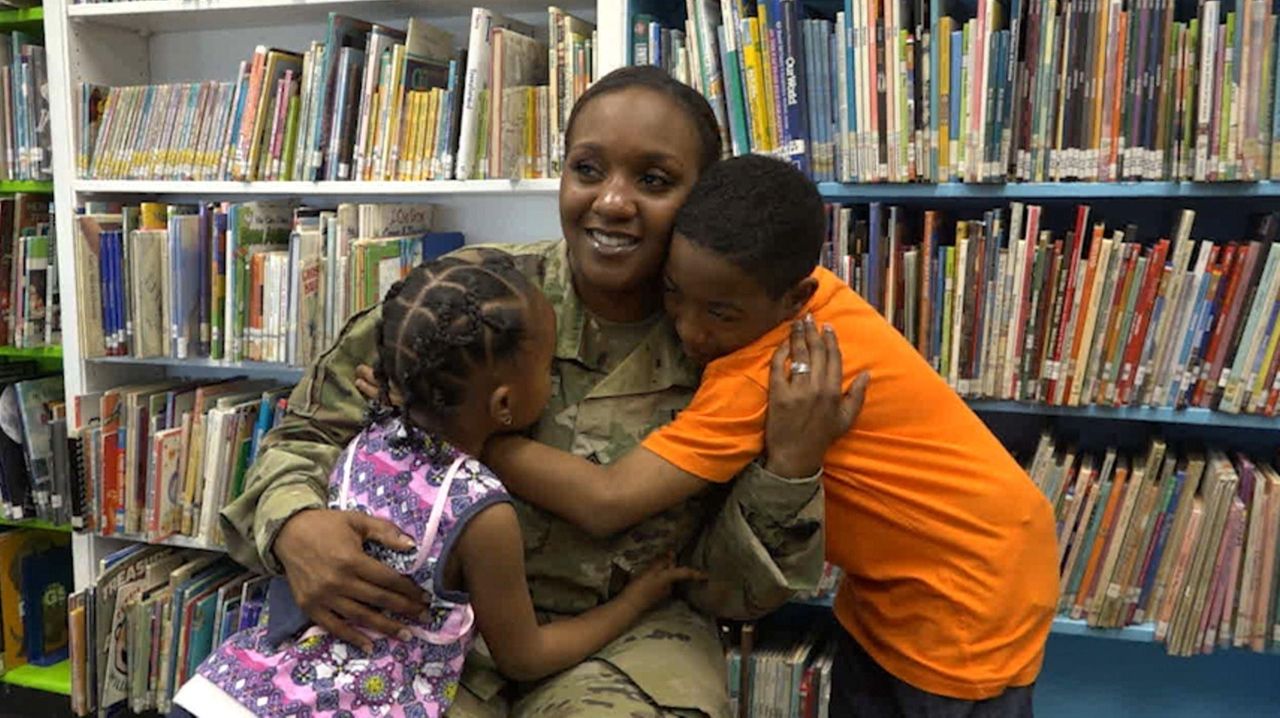 Army Sgt. Shenasiah Lowe, who is stationed in Wiesbaden, Germany, made the most of a stopover in New York by surprising her son, Ja'Mell Jones, with a visit to his classroom at  East Elementary School in Long Beach on Friday, April 27, 2017. Credit: Howard Schnapp, Long Beach School District

When Ja’Mell Jones’ teacher told him there was a surprise waiting for him Friday, he hoped it had something to do with sports.

But Ja’Mell, 8, said it was even better than he imagined — his mother walked through the door of the East Elementary School library in Long Beach. It was the first time he’d seen Army Sgt. Shenasiah Lowe, 26, since Thanksgiving, when he moved in with his grandparents in Long Beach, and his mom stayed in Wiesbaden, Germany, where she is stationed.

“I feel really happy and excited, filled with joy,” Ja’Mell said. “They told me they had a surprise, but I didn’t think it was this. At first I thought maybe it would be a boxing ring or money, but this is better.”

Lowe was heading back to her post after completing a training program in South Carolina. Her flight included a 10-hour layover in New York, and as an early Mother’s Day surprise, she stopped by the school.

As soon as Lowe walked into the room, Ja’Mell jumped from his seat and ran to hug her. After tearful embraces with her son and her daughter, Jai’Liyah Gaines, 4, who attends a prekindergarten class in Long Beach, Ja’Mell read Lowe a Mother’s Day card he had made.

“I love your cooking. It’s like you are the Picasso of food,” he said. “You are my really awesome mom.”

The reunion was short but sweet for the family.

The kids previously lived with Lowe in Germany, but she sent them to live in Long Beach full-time when they got old enough for school. She wanted to make sure they had a consistent education instead of moving with each new military assignment, even if it meant she didn’t see them as often, she said.

“My mom agreed to keep them until I got back to America,” she said.

Lowe’s mother, Tracy Gaines, said Ja’Mell missed his mother during their time apart. They often watched viral videos of other military parents surprising children and imagined their own special reunion.

Gaines said Lowe’s layover was the perfect opportunity. She then reached out to East Elementary School to see if it could help, said principal Kathleen Connolly.

The school arranged for Ja’Mell’s class to be in the library late Friday morning and then waited for Lowe’s arrival.

“I’ve been an administrator for 13 years and this is the first time I’ve organized something like this,” Connolly said. “I really didn’t expect to cry as much as I did.”

Lowe helped teach Ja’Mell’s class a lesson about the military. He stood proudly next to his mother as she answered students’ questions. Then, after a few more hugs, the family left for an afternoon of quality time and a good meal.

“It means everything to see my kids,” Lowe said.

2:26 Forecast: High winds, sunny and very cold
Top photos from around LI, NYC from February 2021
Photos of the dayTop photos from around LI, NYC from March 2021
Virus positives below 4% as NY reaches COVID-19 one-year mark
2:07 Forecast: Overnight winds of up to 55 mph
0:56 Social studies group wants students to take history exams
Didn’t find what you were looking for?