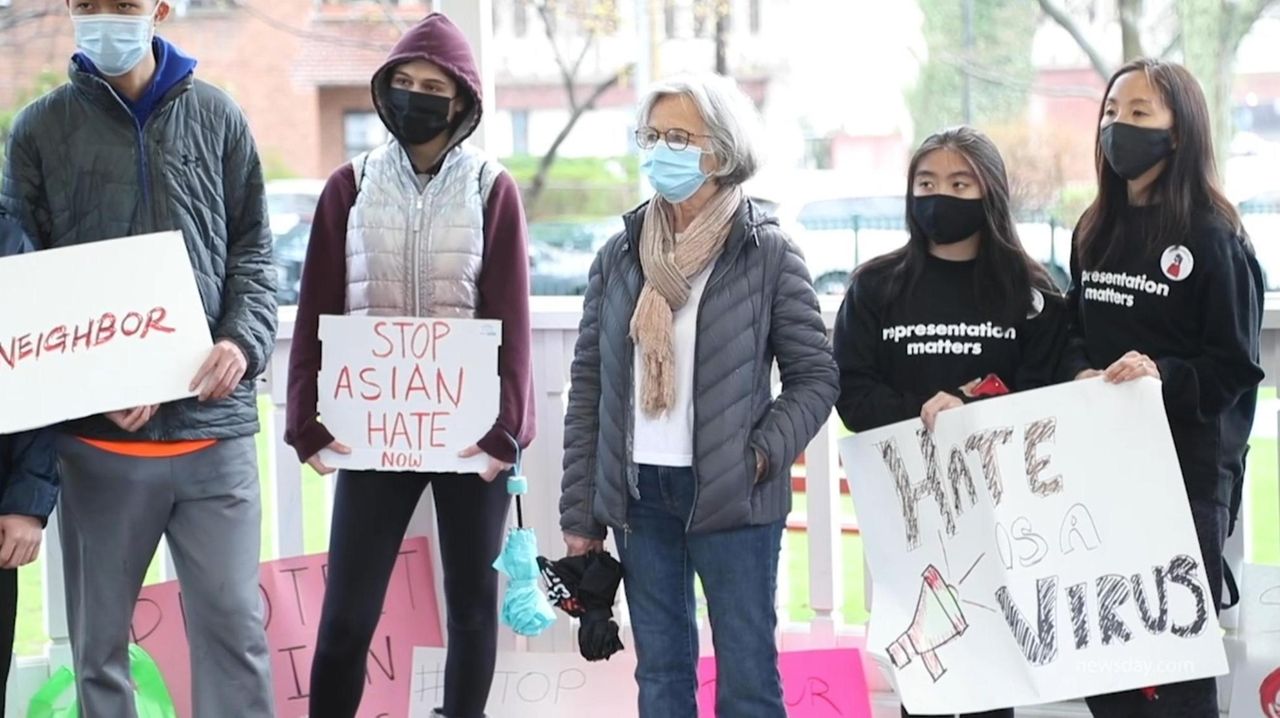 Rain-soaked demonstrators walked down Middle Neck Road in Great Neck on Sunday afternoon chanting "Stop Asian Hate" in a march to condemn the surge of anti-Asian attacks in recent months that have triggered fear, outrage and calls for action.

"A lot of people in my community are scared," said Great Neck North High School sophomore Anjelica Wu, 16, a Chinese American who organized the rally. "I wanted to make people know that their feelings are validated. Other people are feeling the same thing. We need to come together as a matter of sharing not just our fear but also our thoughts and ways to improve the situation."

With a bullhorn in hand, Wu and others led the hourlong march from Great Neck's Firefighters Park to the Village Green and Rose Garden in a procession made up of about 40 people, mostly high school students and their parents, who held up signs and chanted "hate is a virus; we are not a virus."

Sunday’s march was the latest event on Long Island to condemn anti-Asian hate, following a vigil earlier this month and two large rallies last month in Mineola and Hauppauge. The Great Neck Chinese Association said it will host a unity rally on April 25 at the same Firefighters Park on Grace Avenue.

Before the march started, Rosanna Gao, 16, a junior at Great Neck South High School, spoke in front of the crowd of the Model Minority myth and perpetual outsider stereotype Asian Americans faced. The Great Neck South High school student also criticized the hyper-sexualized portrayal of Asian women in Hollywood movies and the media.

Parents who attended the rally said demonstrating on the streets of their own community returns a sense of control back to the teenagers who have struggled with social isolation during the pandemic and a sense of powerlessness in light of the anti-Asian violence.

"With COVID, the kids feel a lack of power. There’s not a lot they can do than to stay remote," said Anjelica’s father, James Wu. "They also feel vulnerable to the pandemic and then the rise of anti-Asian violence where people are being attacked for no reason. This makes them feel empowered, like they are making a difference in the world."

The Great Neck North junior said he was furious when he watched videos of Asian elders being pushed and shoved on the street. Tao, who moved to the United States from China six years ago, said a fellow student called him "coronavirus" in school last year before schools closed to slow the spread of the virus.

"In our culture, we are taught that when something bad happened, you should just let it go," Tao said in Mandarin. "But we need to stand up and speak up."

Farmingdale touts accessibility, sees brisk homes sales
Reopening of New York set for major step forward this week
2:38
Dispute in Long Beach over placement of Pride flag
Antonio Fiorito, Seven Brothers Gourmet founder, dies at 74
Top photos from around LI from May 2021
Top photos from around LI from April 2021
Didn’t find what you were looking for?