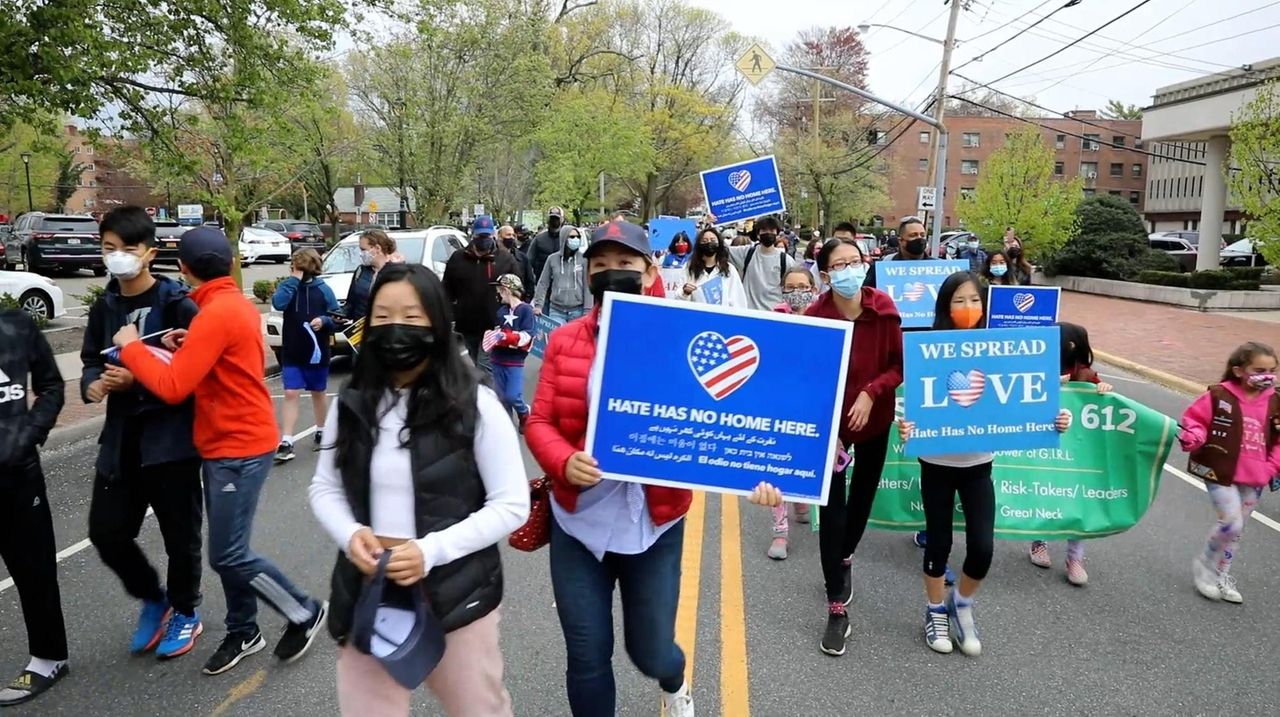 About 300 rallied in Great Neck on Sunday to condemn hate and against Asian Americans and demonstrate solidarity. Credit: Morgan Campbell

Hundreds rallied in Great Neck on Sunday to condemn hate and demonstrate solidarity days after the U.S. Senate passed legislation to address a surge of violence targeting Asian Americans nationwide throughout the pandemic.

Rep. Grace Meng (D-Queens), who introduced the "COVID-19 Hate Crimes Act" with Sen. Mazie Hirono (D-Hawaii), told a crowd of about 300 at the Firefighters Park on Grace Avenue that the bill is headed to the House and President Joe Biden has said he would sign it into law.

The legislation the Senate passed last week would create a position at the U.S. Department of Justice to expedite review of hate crimes and expand ways to report them. The House is expected to take up the bill in May.

"But I want to remind ourselves that passing this type of legislation is not the be-all and end-all of what’s going to solve this problem. It’s only part of the solution," Meng said, calling for more resources for the Asian American community.

Sunday afternoon’s rally marked the latest event organized by local groups, including a few that were led by high school students, in recent weeks across Long Island to condemn hate.

The demonstration also came just two days after an attack on a 61-year-old Asian man who was repeatedly kicked in the head Friday in East Harlem. The latest violence has prompted Gov. Andrew M. Cuomo to direct the State Police Hate Crimes Task Force to assist the investigation.

Following remarks by politicians, organizers and students, the crowd marched down Middle Neck Road to the Village Green and Rose Garden. Along the 1.5-mile route, some drivers sounded approving horns and raised their fists out of their vehicle windows to show support.

Before the march started, Steve Chen, secretary of the Great Neck Chinese Association, spoke on behalf of the group, which organized the rally.

"We are proud to be American. At the same time, we are proud of our Chinese heritage and traditions," he said in prepared remarks. "Being Chinese or Asian does not take away our love and loyalty for this great nation of ours."

Chen’s remarks struck a chord with Adrienne Vaultz, vice chair of the Manhasset-Great Neck Economic Opportunity Council, who fastened a miniature American flag with a #StopAsianHate pin to her rainproof jacket. She said she was glad to see a diverse crowd.

"I’m so happy to see our elected officials coming out, and all of the different ethnicities, religions and people that have come out on this day to stand in unity against hate, period," she said.

Report: Thousands of MTA employees don't use time clocks designed to prevent fraud
These restaurants, employers, colleges and NYC theaters will be requiring COVID-19 vaccines
Four LI hospitals ranked among Top 50 in U.S. in medical specialties
Overpass in Lawrence to be renamed for civic leader
Forecast: Plenty of sun after an unsettled week
Opioid trial witness: Distributors ignored red flags suggesting illicit drug use
Didn’t find what you were looking for?