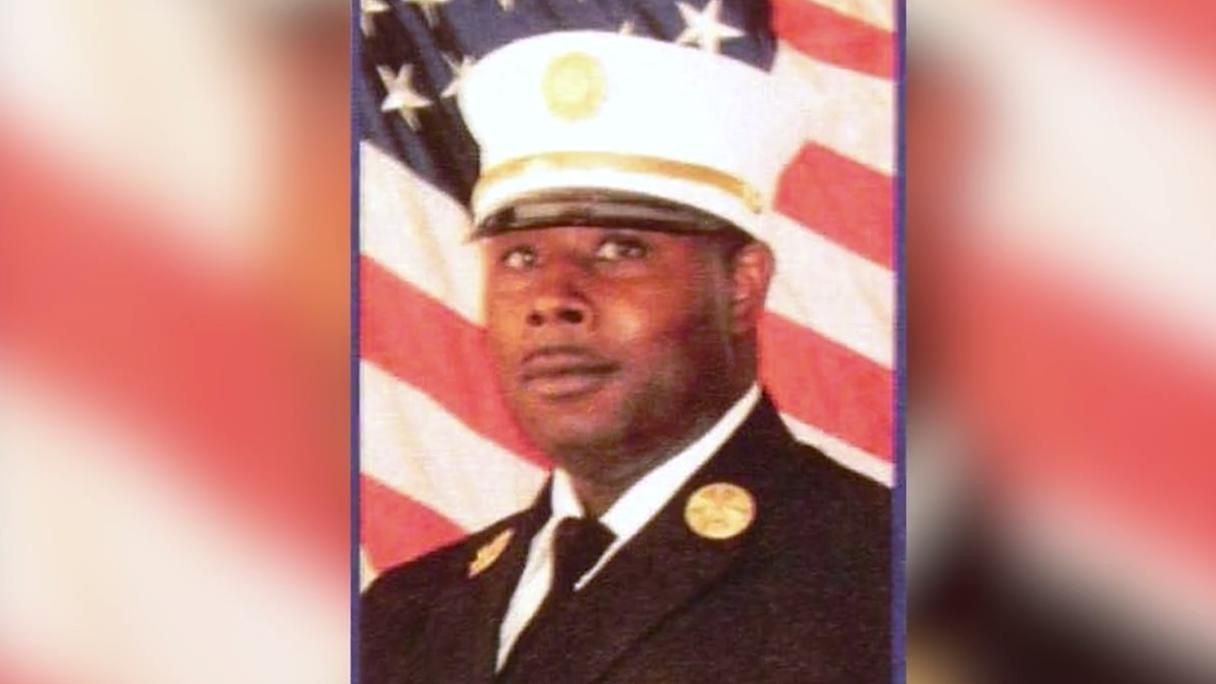 Thousands lined the blocks around Our Lady of Good Counsel Church in Inwood on Dec. 31, 2014, for the funeral of Joseph Sanford Jr., an Inwood firefighter who was fatally injured in a house fire Dec. 23, 2013. Sanford was a 17-year veteran of the department and a former assistant fire chief. (Credit: Newsday / Chris Ware)

In a near-whisper, Janisha Sanford recited the "Fireman's Prayer" Wednesday to honor her father, a veteran Inwood firefighter who died in the line of duty days before Christmas.

"When I'm called to duty, God, whenever flames may be," the 19-year-old college student said, "give me the strength to save some life, whatever be its age."

As her emotion-choked voice trailed off, mourners at Our Lady of Good Counsel applauded.

Moments later, when the brother-in-law of fallen firefighter Joseph Sanford Jr. stepped to the Inwood church's pulpit, he encouraged those in attendance to clap for the teen again.

"That takes a lot of courage and strength," said Wilbert L. Ingram III, a pastor at Greater Beginnings Ministries in Cambria Heights, Queens.

Ingram said his eulogy was for mourners -- not Sanford.

"He has already preached his eulogy. . . . He has done what has been required for him and his assignment living here on this Earth," Ingram said.

A woman sang "Glory, Glory, Hallelujah" as firefighters filed out of the church. Pallbearers carried Sanford's polished coffin down the front steps, gently lifting it onto a ceremonial fire truck -- one of many that slowly made their way down Wanser Avenue.

Thousands of firefighters and police officers from as far away as North Carolina lined the street and saluted as bagpipers played. A solemn Inwood firefighter carried Sanford's helmet bearing the number of his engine company: 311.

Mourners remembered Sanford, 43, as a selfless and courageous man who loved being a firefighter.

The Alabama native worked for the Nassau County Public Works Department and was an Inwood Fire Department volunteer for 17 years. The man known as "Junior" was also a barrel-chested athlete and football fan who co-owned the semipro Nassau Golden Eagles.

A cousin recalled that Sanford was his grandmother's favorite as a child. She baked him biscuits in the morning because she thought the cereal served at school wasn't enough for a growing youngster.

Sanford was one of several Inwood firefighters who joined efforts to search a Woodmere home in teams during an early morning fire on Dec. 19.

Volunteers from two other departments found him in the flooded, debris-strewn basement after part of the first floor collapsed. Officials said it's unclear if Sanford fell through the floor or was in the basement at the time of the collapse.

He was rushed to a hospital where he was placed on a ventilator until he succumbed to his injuries on Dec. 23.

Richard Magliaro, Sanford's friend since middle school, was among those who held vigil at the hospital.

"I just wanted him to wake up," said Magliaro, a former Inwood fire chief. "I'm going to miss him."

Sanford, a former first deputy chief, was posthumously promoted to chief. Beside his daughter, he is survived by his wife Jacqueline and two sons, Douglas and Isaiah.

The National Law Enforcement and Firefighters Children's Foundation said Wednesday it had given the family a $5,000 grant. The Inwood department has also set up a fund. Donations can be sent to: Inwood Fire Department/Joseph Sanford Fund, 188 Doughty Blvd., Inwood, NY 11096.

Magliaro's cousin, Anthony Montilli, 20, said Sanford was a mentor who helped him land a job with the county parks department.

"He really had a heart bigger than the universe," Montilli said.