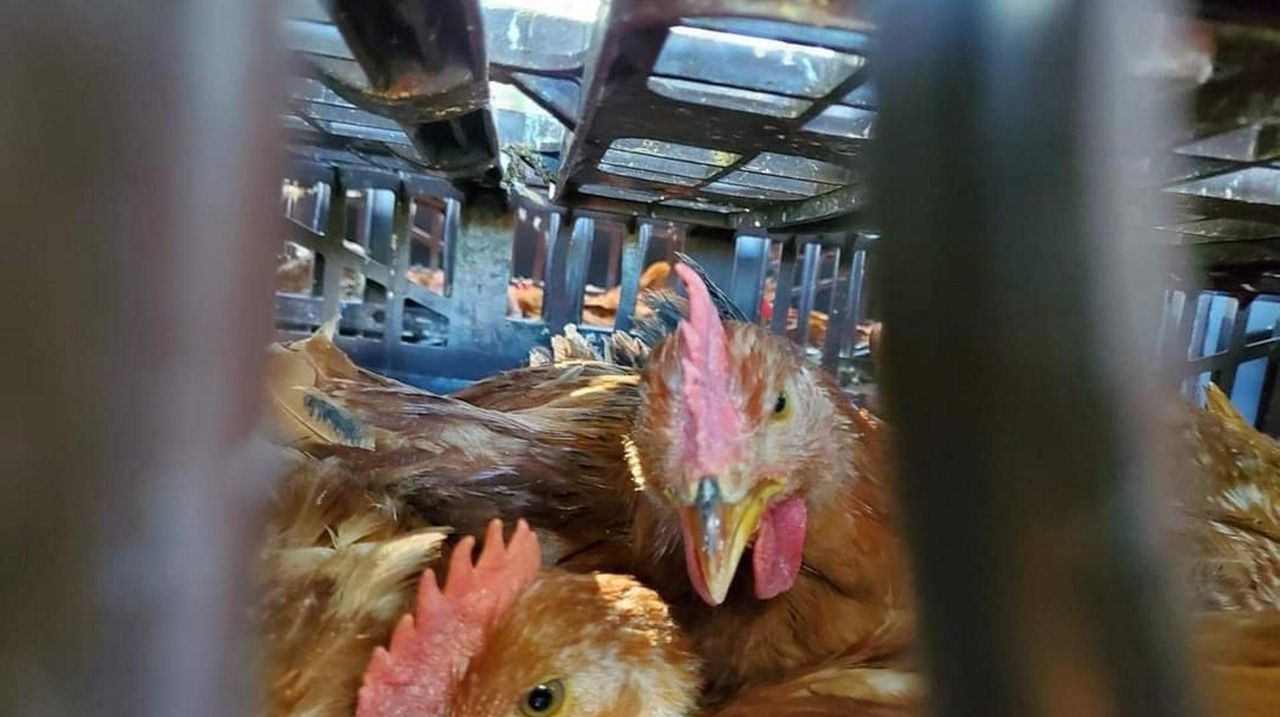 When 66 broiler chickens fell off a truck in Hewlett, their destiny changed. Steve Langford has the story. Credit: Newsday / Raychel Brightman;

Half of the nearly six dozen, eight-week-old baby chicks that fell off a truck in Hewlett last week while crammed into seven crates still need homes, animal rescuers said Wednesday.

The Nov. 3 midday mishap was possibly caused by a pothole, said Maria Mora of the Nassau County SPCA. Nassau police said the nonprofit had the 66 chicks under control when they arrived at the scene, Peninsula Boulevard and Mill Road, so no report was needed. Information on the carrier was not available.

Some chicks had leg lacerations, and a few broken bones; others were dehydrated and overstressed, Mora said. Possibly, poor care was the cause; some ailments may stem from the fall, Mora said, or being crowded into crates with no room inside for their feet, and then stacked on top of each other. The crates containing the chicks were unlabeled, meaning the birds' origin and destination were unknown, officials said.

These chicks, some already rehomed out East, likely are the Freedom Rangers breed. This is a variety called "meat birds," probably destined for plates.

Chickens increasingly are viewed as affectionate and novel pets that may live five or 10 years — and females lay eggs. Still, suitable adopters may be scarce.

The birds must diet — or risk death, said Todd Friedman, founder of Arthur's Acres Animal Sanctuary in upstate Parksville, who is working with an employee and Wantagh native, Christina John, 32, an animal caretaker.

"They'll eat until they explode," he said. "They were bred to get giant very shortly because that's where the money is."

Breeders, trying to keep costs down to please bargain-hunters, send them to slaughter as soon as they can, Friedman said.

On Nov. 20, John said she plans to drive the remaining 32 chicks — or 33 should one recover — to new homes in Virginia and Pennsylvania — if the GoFundMe page she created raises enough money for her to rent a van.

Spacious dog crates will be used.

"We could put like four in there," she said, "and they fit comfortably as long as they can lie down and move around a bit."

"Roosters are really hard" to place, Friedman said. Males must live in rooster-only areas — raising sanctuaries' costs — as they will fight if hens are nearby. And with adopters, "a lot of the folks have one rooster," he said.

Also, their penchant for welcoming dawn rather loudly is a factor that led several localities, such as Brookhaven, to only allow hens, noted Suffolk SPCA Chief Roy Gross.

As lots of web sites reveal, figuring out which are hens and which are roosters can be quite tricky. This is a crucial test for breeders seeking egg layers; the vast majority of baby males are slaughtered in ways advocates say are needlessly cruel.

At one day old, hens have some longer wing feathers, said Gregory Martin, a Penn State Extension poultry educator based in Lancaster County. Youngsters are so fragile, this test requires gentleness.

"You're looking for the length of the primary to secondary or [feathers]," he said. "You'll see there are longer feathers on females than on other parts of the wing ... they can do this very quickly."

As the chicks grow, other ways to determine the birds' sex arise — but their behavior remains a vital clue. Females are far less likely to fight.

So any adopters, experts said, might be asking: "Did my rescue chick just give me the stink eye?" A cocked head and bold stare may reveal a rooster.

At least, the worst a rooster can do is deliver memorably punishing pecks and possibly kicks.

The same can't be said of larger animals.

Frankie Floridia, president, Strong Island Animal Rescue of Port Jefferson Station, on Tuesday freed a 325 to 350-pound buck as it slowly choked in a golf net put up by a Setauket homeowner and wrapped around its antlers, throat and mouth.

"There were were a few times he did try to charge me," Floridia said.

Once freed, the buck appeared unhurt after four and a half minutes of his darting in to slash through the net.