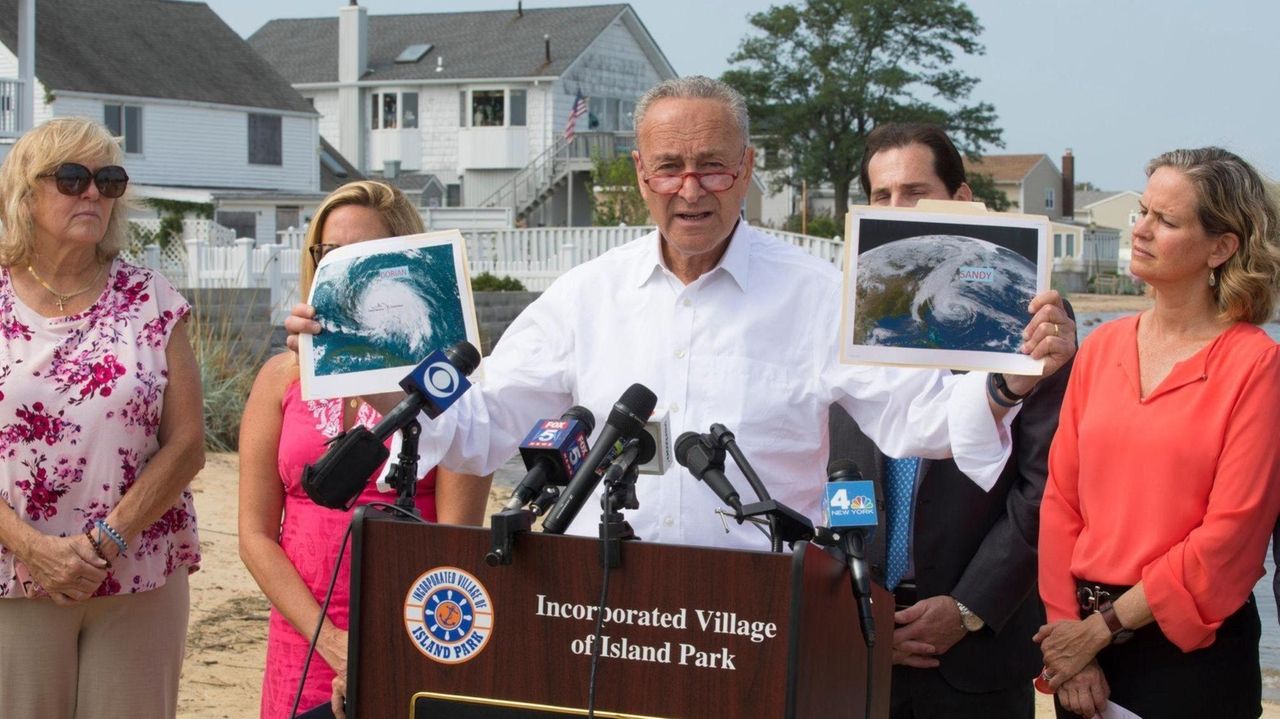 Sen. Chuck Schumer on Wednesday called on the U.S. Army Corps of Engineers to approve a $6.1 million extension of the Nassau County Back Bays study on flood prevention measures for Long Island’s South Shore.

The Army Corps has invested $3 million during the past three years studying bulkheading, drainage, tidal gates and other flood control projects. The study is set to expire Sept. 30.

Schumer stood on the eroding “Little Beach” in Island Park with local officials, where he called on the Army Corps to sign an extension of the project using money already allocated in a federal Sandy relief fund.

He said the federal government is considering cutting funding and not completing the study.

“We are all united that we need to do everything we can to make sure what happened years ago with Sandy does not happen again,” Schumer said. “We need to make sure we’re protected before the next hurricane comes.”

The study is being conducted by the Army Corps Philadelphia district, and representatives said they were seeking an extension of the study.

"Due to the size and complexity of the Nassau County Back Bays Coastal Storm Risk Management Study, we have submitted a request for an exemption from the three-year study requirement and are awaiting the results of that process," officials said.

Funding includes a wide range of projects, including flood barriers and simulations of future storms that span across 30 miles of coastline, including South Shore communities along Reynolds Channel and into the Hewlett bays and East Rockaway.

The extension would allow the local Army Corps office to continue the study for three more years. A status report in April suggested surge barriers, but further work is needed to protect from future storms and make communities more resilient to flooding, Schumer said. He urged South Shore residents to continue to pressure the Army Corps to finish the study.

Sen. Todd Kaminsky (D-Long Beach) said rising sea levels and more severe storms will continue to affect communities on the water that were flooded by Sandy.

“Resiliency is the answer if we are going to have communities survive here in inclement weather,” he said. “The blueprint is going to come from the Army Corps Back Bays Study and how we’re going to live here for the next 50 years.”

Hempstead Supervisor Laura Gillen said the majority of the study includes the Town of Hempstead, including 150,000 structures and $100 billion total damageable assets.

“The Army Corps needs to stay on the South Shore until the job is complete,” Gillen said. “Right now, Hempstead has half a blueprint, and if the federal government has the proceeds to spend on a border wall, there should be enough to protect thousands of homeowners.”

Councilman Anthony D'Esposito, who served as a volunteer Island Park Fire Chief, said 95 percent of homes in the village were flooded during Sandy.

"Too many people and businesses and the future of our local communities depend on this study," D'Esposito said.