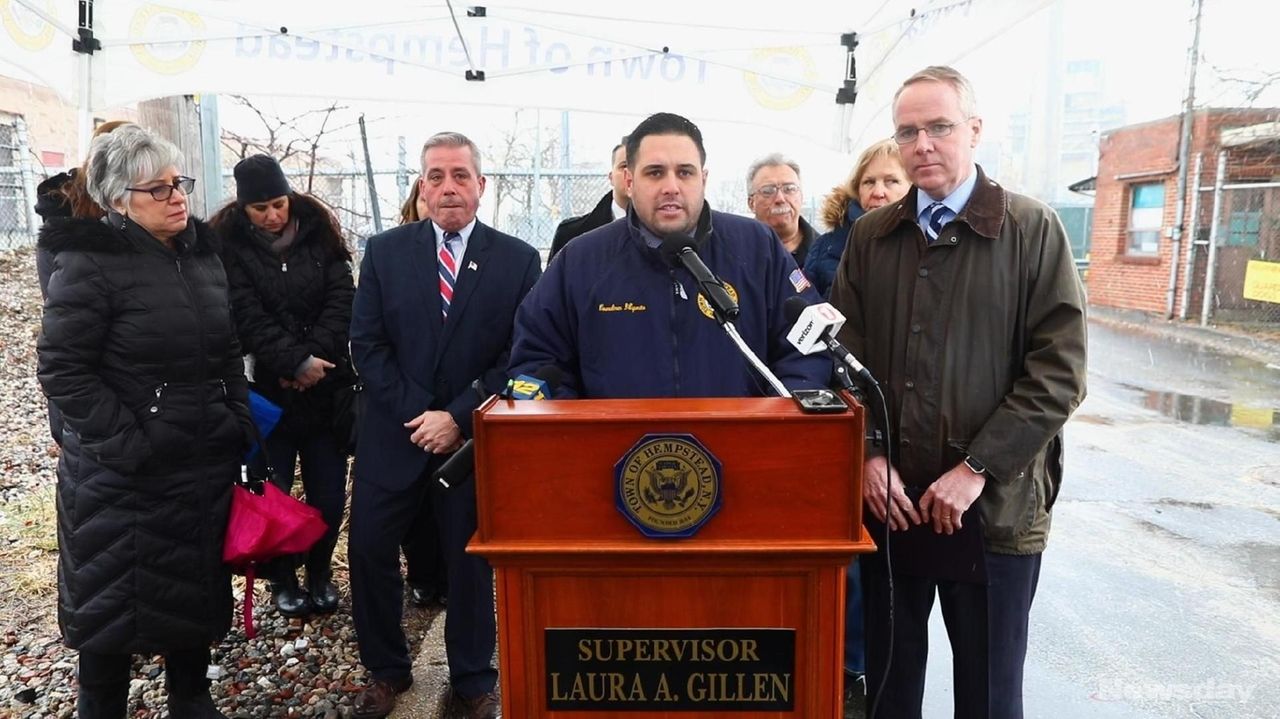 On Wednesday, Jan. 17, 2018, Hempstead Town officials held a news conference to implore LIPA to not challenge the Pilot tax assessment for the E. F. Barrett Power Plant in Island Park. Officials called upon LIPA and PSEG to commission a new study to re-examine the area's energy needs, with an open mind regarding the repowering of the power station. Officials said LIPA's property tax assessment challenge will decimate the Island Park community if successful and will increase the average property tax in the community by $3,000 per parcel. Credit: Newsday / Chris Ware

Hempstead Town and Island Park officials are calling on the Long Island Power Authority to commission a new study on repowering the E.F. Barrett Power Plant in Island Park.

Island Park school officials and the Hempstead receiver of taxes said that property taxes in Island Park and the unincorporated hamlets of Barnum Island and Harbor Isle could double for some homes and increase on average $3,000 if LIPA’s challenge of its tax assessment is reduced by 90 percent.

LIPA is challenging the tax assessment of Barrett Plant for $42.6 million, which is subsidized by LIPA customers. LIPA officials said tax payments make up between 15 and 17 percent of customer utility bills.

A study last year by PSEG Long Island found that there was not the supply demand or need to repower Barrett or a power plant in Port Jefferson. The study also recommended scrapping a $2.9 billion plant in Yaphank. A separate study is planned this year for the Northport plant, for which LIPA is challenging the Town of Huntington on an $80 million tax assessment.

LIPA forecasts that Long Island’s power demand will decline over the next decade before marginally increasing by 2035.

Hempstead Councilman Anthony D’Esposito and Receiver of Taxes Donald Clavin called on LIPA to convert the 1956 Barrett steam power plant to a clean natural gas facility. Officials also called on the Nassau County Department of Assessment to oppose the tax assessment challenge. Town officials said LIPA had agreed not to challenge its assessment in 1997.

LIPA officials said they could not comment on the town’s proposals, given pending litigation, but noted that LIPA has offered settlements in other communities such as Port Jefferson to ease the tax burden over a 10-year tax ramp down.

“LIPA continues to offer the communities hosting our power plants a pathway to a sustainable tax future. Our customers are paying taxes as if there were 20 power plants in Island Park. All 3 million Long Island residents deserve a fair tax bill,” LIPA officials said in a 2017 report on property taxes.

The drawdown of property taxes has been supported by several Long Island development and environmental advocacy groups.

“A fair phase-down settlement that economically protects the affected community while ending the practice of virtually all ratepayers contributing millions for overassessed power plants is the only solution,” said Kyle Strober, executive director of the Association for a Better Long Island, a Long Island advocacy group.