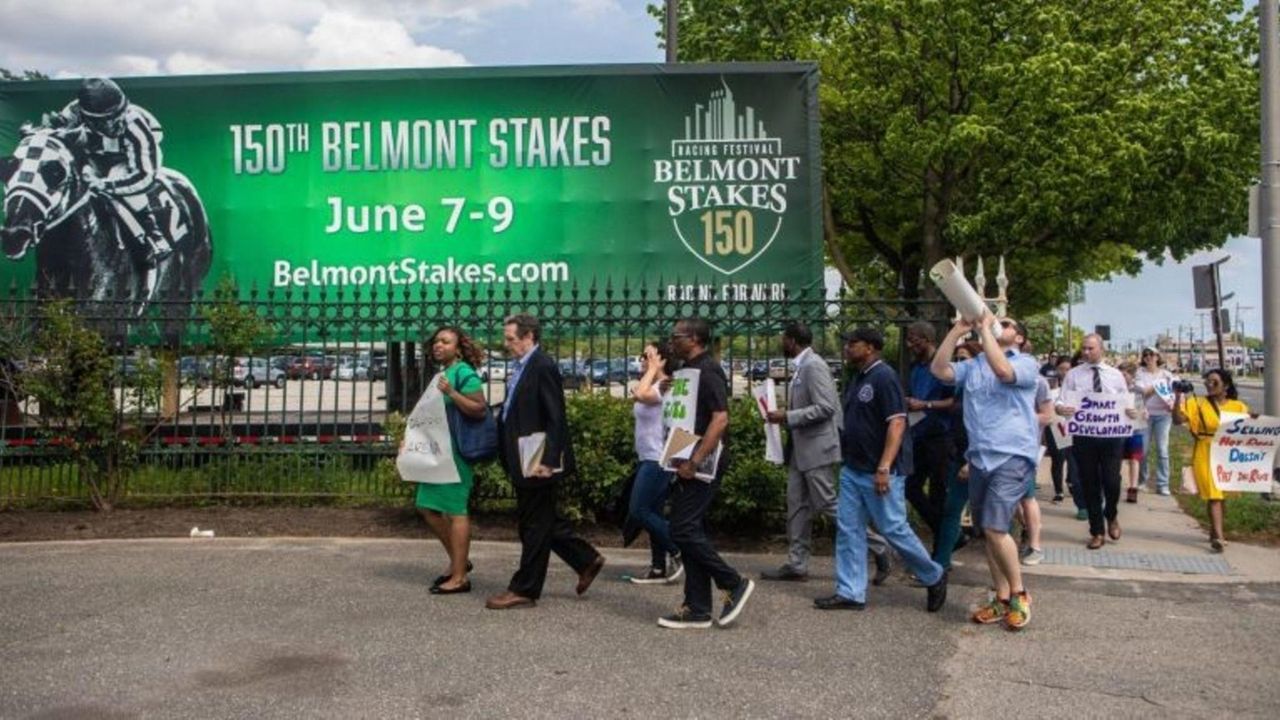 About three dozen protesters of the proposed development at Belmont Park on Sunday carried signs reading “Selling hot dogs doesn’t pay the rent” and “The Coliseum is the Islanders’ home” at the Elmont racetrack, vowing to return June 9 for the Belmont Stakes.

Aubrey Phillips, 60, an information technology security consultant from Elmont, said he wants the $1 billion project stopped because he doesn’t believe residents will benefit.

“What’s this new development going to do for us?” Phillips said. “The jobs are not going to be high paying.”

Community organizer Tammie Williams, 36, from Elmont, said the community needs “a seat at the table” with any project at the site. The plan includes an 18,000-seat sports arena.

“We’re not against development,” Williams said. “We just want it to be fair, we want it to be transparent and we want to be involved.”

Speaking to protesters on Hempstead Turnpike via megaphone, New York City civil rights lawyer Norman Siegel, who is representing a group called the Belmont Park Community Coalition, said arena projects across the country have hurt the residential neighborhoods in which they are built.

“The small mom-and-pop stores disappear in five years and the people who own homes, they disappear, too,” Siegel said.

The New York Islanders along with New York Arena Partners — a development group that includes Sterling Project Development, a real estate firm run by the Mets’ Wilpon family, and Oak View Group, an arena development company backed financially by Madison Square Garden — plan to invest $1 billion in private funds to build the project on state-owned land. The group would lease the land from the state for 49 years and pay a total of $40 million in rent.

A draft environmental impact statement on the project is expected to be completed by the end of this year, according to the Empire State Development Corp., the state economic development agency. Construction could begin early next year and be completed in 2021.

Belmont developers in session with residents

Last month, at a public meeting at Elmont Library, the developers announced they planned to cap the height of a planned hotel at the site at 150 feet. In addition to retail space, restaurants and a hotel, the plan includes 30,000 square feet of office space, 10,000 square feet of community space and 8.5 acres of public open space.

The Islanders left Long Island in 2015 to play at Barclays Center in Brooklyn. In December, Gov. Andrew M. Cuomo announced the proposed Long Island arena would bring the National Hockey League team “back where they belong.”

Bettman on Isles’ Belmont arena: Everything is on trackNational Hockey League commissioner Gary Bettman expects the Islanders to break ground on their new ...

LI restaurants, theaters push back on state's vaccine suggestion
LI school start dates range from AAug. 26 to Sept. 10
These restaurants, employers, colleges and NYC theaters will be requiring COVID-19 vaccines
Report: Thousands of MTA employees don't use time clocks designed to prevent fraud
Four LI hospitals ranked among Top 50 in U.S. in medical specialties
Overpass in Lawrence to be renamed for civic leader
Didn’t find what you were looking for?