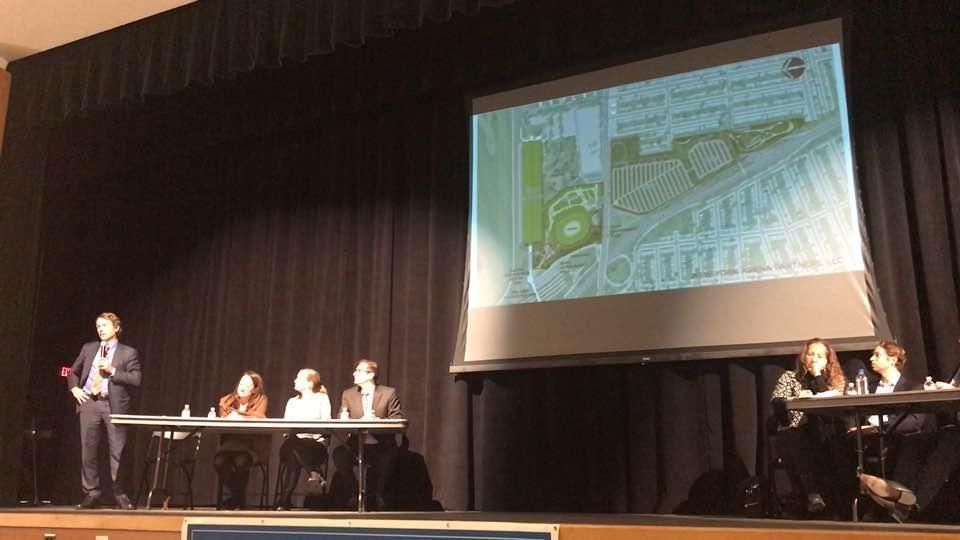 On Sunday, Dec. 10, 2017, details were revealed for the first time of the Islanders' and NYCFC's proposals to build stadiums at Belmont. (Credit: Newsday / Jim Baumbach)

The New York Islanders and New York City FC released details of competing proposals Sunday to redevelop Belmont Park in Elmont with both vowing to hire locally for some of the thousands of predicted jobs and pledging to set aside space for community use.

The Islanders’ proposal includes an 18,000-seat, year-round arena that would host 150 events annually, as well as 435,000 square feet of space for retail, a hotel with 200 to 250 rooms, and a 10,000 square-foot “innovation center” that would be developed with input from residents.

NYCFC, a professional soccer team partially owned by the Yankees, is calling for a 26,000-seat open-air stadium in addition to 400,000 square-feet of space for retail, a 5.2-acre community park and a 2-acre soccer facility.

The hearing at Elmont Memorial High School represented the first time the teams’ ownership groups publicly released specifics about the bids to redevelop 43 acres of state-owned land that both previously submitted to Empire State Development.

Five of the area’s elected officials hosted the meeting. It included a question-and-answer session with a moderator reading pre-submitted queries from an audience of about 200.

Before the session, about 20 people protested development plans, saying they want education, research or technology centers built that would bring high-paying jobs to the area.

“We are very thoughtful developers and we don’t build and then move on,” said Richard Browne, managing partner for Sterling. “We build where we live and we keep on with it and manage our property like we manage our homes.”

Both would incorporate outlet stores into their retail components, according to the proposals. Neither presentation included costs or financing.

“We’ve been looking for a soccer stadium for four years now and we’re very excited to be working with Related Companies to propose our ideas at this site,” said Jon Stemp, NYCFC chief infrastructure officer, referring to the lead developer of the soccer team’s plan.

After an audience member asked whether the hockey and soccer teams could share the site, both sides agreed it wasn’t feasible. Although the site has plenty of acreage, representatives for both teams said putting them at the same location would mean additional development and create more opposition.

Q: Will eminent domain be used to buy up nearby homes?

A: #isles and NYCFC both say no.

#isles: Will work with unions to get local residents hired for construction jobs. “Its a very, very good labor pool.” No specifics on wages, either. https://t.co/r1bs2NiYa1

Jon Stemp of NYCFC said earlier sound in open air stadium is not much different from sound emanating from a hockey arena.

#isles: permanent LIRR stop is necessary. “We have to have daily service, we have to have a park & ride.” https://t.co/SBBrhU9RkB

NYCFC: There will not be any overflow parking into Elmont neighborhoods.

One of the questions from the public is about the details of the arena, specifically how low is the roof. Populous rep says they’re still working through the plans.

Q: Is there a low-hanging roof similar to that of the Nassau Coliseum?

A: Lots of blank faces.

Isles group reps say they share the community’s interest in a full time LIRR station and will work with MTA to make that happen.

Designer for Populous touts how the arena will have sightlines designed for hockey and references the ice; speaking clearly to Islanders fans about creating home for them.

NYCFC says there would initially be 4,500 construction jobs and then 1,600 direct and indirect jobs through the retail and stadium.

NYCFC has played the majority of its Major League Soccer home games at Yankee Stadium since it started play two years ago.

The soccer club is also actively seeking a New York City location for its stadium, while Islanders co-owner Jonathan Ledecky has said “we have blinders on for Belmont.”

The Islanders have until January to opt-out of their 25-year lease with Brooklyn’s Barclays Center.

Legislators in Nassau and Suffolk counties would prefer that the Islanders return “home” to the Nassau Coliseum, though NHL officials have said that is not a possibility.

The public may submit comments after today’s hearing, per moderator. Each bidder must discuss land uses, public amenities, job creation and traffic/parking during their 15-min timeframe.

.@Tammie4Change and about 20 others protest possible stadium coming to Belmont Park. pic.twitter.com/98RevmFUgv

Patrick Dowd says the #isles coming to Belmont Park would be “an ideal location” for the team’s fan base. pic.twitter.com/2DhkXFJU4e

A third bidder, Syosset-based Blumenfeld Development Group, announced last week that it was withdrawing its bid to redevelop Belmont, citing the state’s “extraordinary requirements” that “appear to create a selection process that has been predetermined.”

ESD has provided no timeline for its decision.

Neither proposal included costs or financing.

Projects that could change LI Islanders submit plan for arena at Belmont ParkThe Islanders said they have "submitted a comprehensive proposal to create a world-class sports and entertainment destination at Belmont Park."