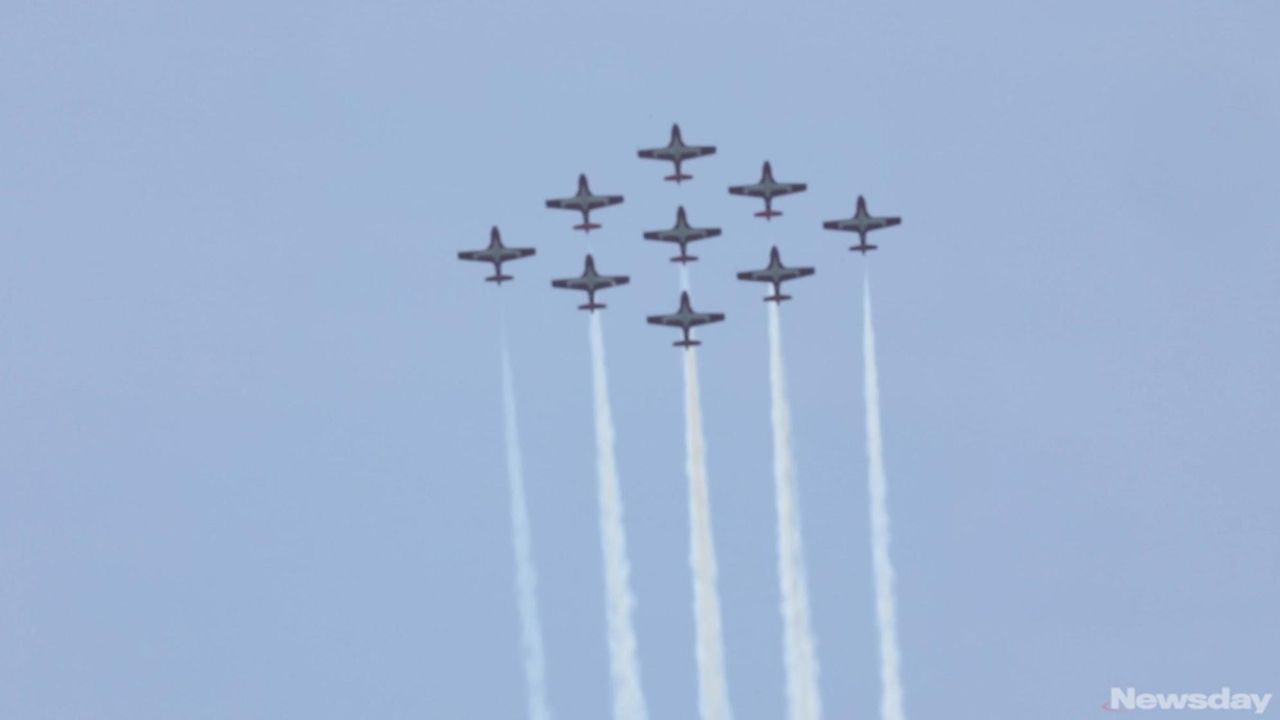 Long Islanders reveled Saturday at another epic air show at Jones Beach that combined a great day in the sun with astounding aerial gymnastics.

Prop plane magicians wove crazy patterns in the sky. The World War II planes reminded spectators of the many who have given their lives in service to their country.

So did the U.S. Army Golden Knights Parachute Team who commemorated Memorial Day by landing the American flag right before the Central Mall — and then came the U.S. Air Force F-22 Raptor and the U.S. Navy Blue Angels.

The Navy’s F/A-18 fighter jets once again closed the Bethpage Air Show, bursting overhead in their tight formations and roaring past each other at up to 700 mph in a roughly 40-minute performance.

Sean D. Tucker and Johnny D! - stunt pilots extraordinaire - streak across the sky, a 1st by these two as Tucker anticipates forming his new precision flying team when the season ends pic.twitter.com/Ahz5AVzXvH

Jones Beach was teeming with people for the two-day air show. Saturday’s crowds totaled 193,000, according to officials, quickly filling all parking fields for the show by 11:30 a.m. and leading to the closure of parkway lanes heading toward the beach.

Among the aviation fans was Chris McCaffrey, 51, of Bellmore, with his camera pointed to the sky.

“There’s nothing not to like. You have Memorial Day. You have the beach. You have all the military,” he said, donning a Blue Angels hat.

The air team is his favorite part of the show — and the most challenging to photograph.

“They’re very, very fast,” he said. “Once you hear them they’re already gone.”

The secret to photographing them?

For children, the day offered what could become a lifetime of memories as the air show is known for its loyal fans. Some were attending the 15th annual show after enjoying a dozen earlier ones.

Liam Rivera, 8, of Brentwood, watched spellbound as the parachutists descended above the sprawling sands and ocean.

The 11 jumpers came down from 12,500 feet, descending in free fall at 120 mph before opening their parachutes and sticking the beach landing with pinpoint accuracy.

In a big treat at his first air show, Liam got to help repack the parachute of Staff Sgt. Marcus Denniston, one of the Golden Knights jumpers. They both knelt down on the grass near the beach, and Liam helped gather up the many cords and chute.

Liam said to the jumper, pointing to the fluffy chute, “That’s where the air comes in and makes it go slower.”

“We’re making quick work of this,” he said.

For Liam, this was a highlight of a magical day.

His uncle, Felix Rivera, 38, of Bay Shore, a veteran of a half dozen of these shows, said he planned to bring the boy here every year.

“I love seeing our military doing what they do best,” he said. “And all the smiles on the little ones.”

By midafternoon, some high clouds had retreated — though there was a touch of distant haze — leaving the skies clear for celebrated stunt pilots, including Sean D. Tucker.

None of the passes, barrel rolls and diamond maneuvers were obscured as the sky dancers overcame gravity — executing stunts the announcer said perhaps only 20 pilots in the world could perform.

“Give me a wave,” Tucker said while he careened overhead.

“If you see a man in uniform give him a cheer, give him a hug, say thank you,” he told the throngs below.

Though Sunday’s forecast has brightened, scattered rain and clouds are possible, so the Raptor might not come out to play.

If the ceiling is not at least 1,500 feet above the beach, the Raptor must subtract the “petal turn,” a 360-degree rotation, and the “tail slide,” when the aircraft flies backward down toward the beach, said Staff Sgt. Tyler VanWatermulen.

In addition, any rain could strip off the paint, said Senior Airman Kaylee Dubois, a Raptor spokeswoman, which would mean more work for the repair crew as that is one of the stealth components.

“The air show has become a way to express patriotism, love of country and respect for those who have served in the armed services — especially those who’ve given the utmost,” he said.

Nor did Donald Mangieri, 62, of Levittown, forget the meaning of the holiday. He grew emotional explaining what it was like to spend Memorial Day watching the military achieve perfect flying.

“It’s just America, just all of the people keeping us free, all the people who passed away — all of the service members. This is how we are celebrating our freedom.”