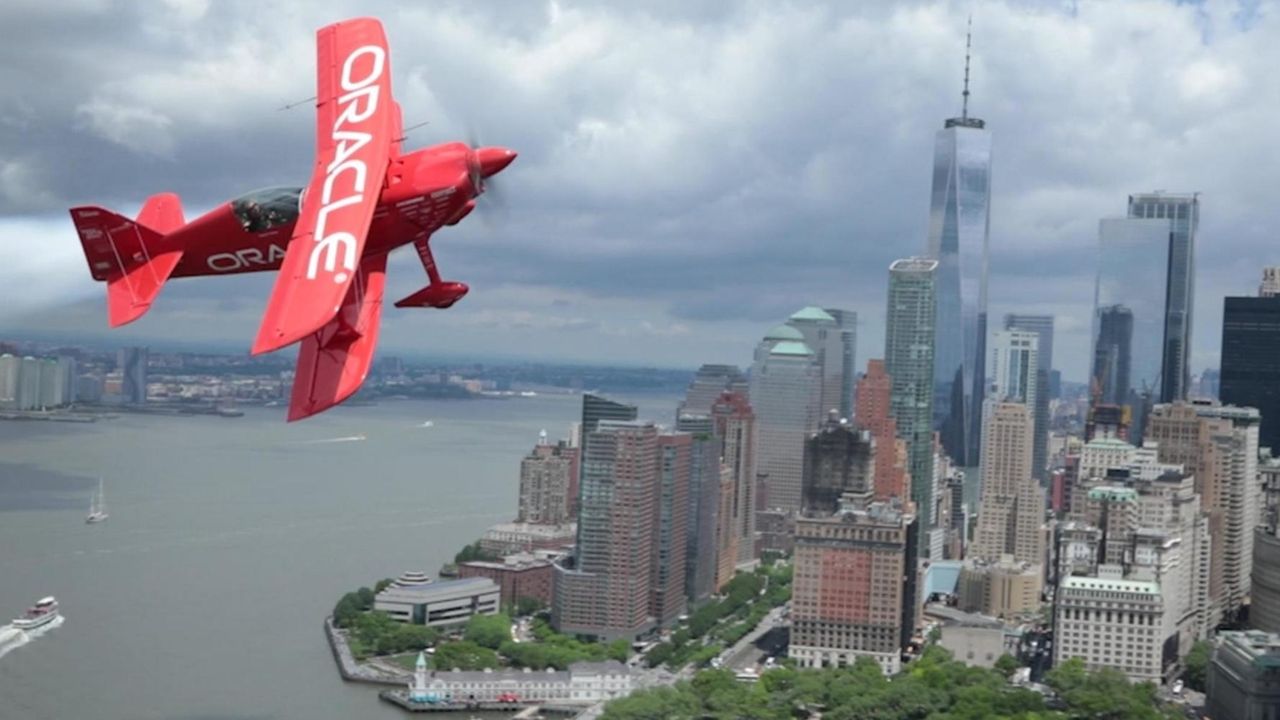 Sean D. Tucker, a world-famous aerobatic pilot whose expertise and advice were essential in making the Bethpage Air Show a success, will retire this year after decades of battling Earth’s gravity.

But not for long. And only as a solo performer.

“I love the work more than ever,” said Tucker on Wednesday, days before the 15th annual Memorial Day weekend show at Jones Beach, during an interview at Republic Airport in East Farmingdale. “But my gut tells me it’s time to move on.”

So he is creating a formation flying team.

His new venture will pair him with “like-minded people who are passionate about flight,” he said, and who also view aerial ballet as poetry.

“This is one part of my journey as an aviator and a performer that I haven’t really completed yet,” said Tucker, who was accompanied Wednesday by his well-trained 11-month-old dog, a vizsla named Levi.

At the end of the air show season, Tucker will retire his bright red custom $600,000 Oracle Challenger biplane, which is designed for his stunts, including a forward flip, up to 10 backward flips and the steepest of dives — sometimes tail-down.

Tucker’s love for extreme performance has spurred him to embrace a punishing fitness regimen to counter as many G forces as a jet fighter pilot, often without the gravity-fighting suits they wear to avoid blacking out.

One example? Two hours on a stair climber with a 35-pound pack. Three times a week.

“You’re forced to have that discipline,” said Tucker, who flew in his first show in 1976.

“This is pretty dangerous work. If you don’t really put your time in, you’re going to die,” said Tucker, who has jumped out of three planes to avoid death or injury.

The cost Tucker pays to keep gravity at bay includes torn ligaments in his right wrist that require him to perform in a brace. He also has had to undergo lots of physical therapy and chiropractor adjustments to deal with the damage his neck has suffered.His payoff is incalculable. Though he might fly like a superhero now, he candidly admitted it wasn’t always easy.

“This is such a privilege for me, this is living a dream — after I conquered my fear of flying,” Tucker said.

George Gorman, Long Island deputy regional director for the state parks department, called Tucker “a tremendous partner and friend” to the air show since it began in 2003.

Tucker advised hiring a leading announcer and one of the best “air bosses” to direct pilots, as well as upgrading the public address system. He also counseled organizers on which performers to select.

Tucker recommended a helicopter shuttle to keep the performers on time, Gorman said, and “reviewed all of the logistics of our air show to ensure that it is top of the line.”

“He ensured that we would develop into a highly regarded air show,” Gorman said.

Holding the show on Memorial Day — and with no fee other than for parking — is important for Tucker, an honorary member of the U.S. Air Force Thunderbirds, U.S. Navy Blue Angels, Royal Canadian Snowbirds, Brazilian Air Force Smoke Squadron and the U.S. Army Golden Knights.

“This is the people’s show for everybody on Long Island,” he said.

“Memorial Day, it’s a very special time, honoring all our service members, why we are Americans,” Tucker said. “It’s the start of summer, and you just get to see all those people having a good time.”

Tucker, who was named one of 25 Living Legends of Flight by the Smithsonian National Air and Space Museum, chairs the nonprofit Bob Hoover Academy and the EAA Young Eagles, which aim to inspire underserved youth by demonstrating the miracle of flight and helping them make better decisions.

At the start, sometimes, he said, “The kids won’t even look you in the eye.”

But, he added, “Once they [realize they] can dream for the first time, they are never going back.”