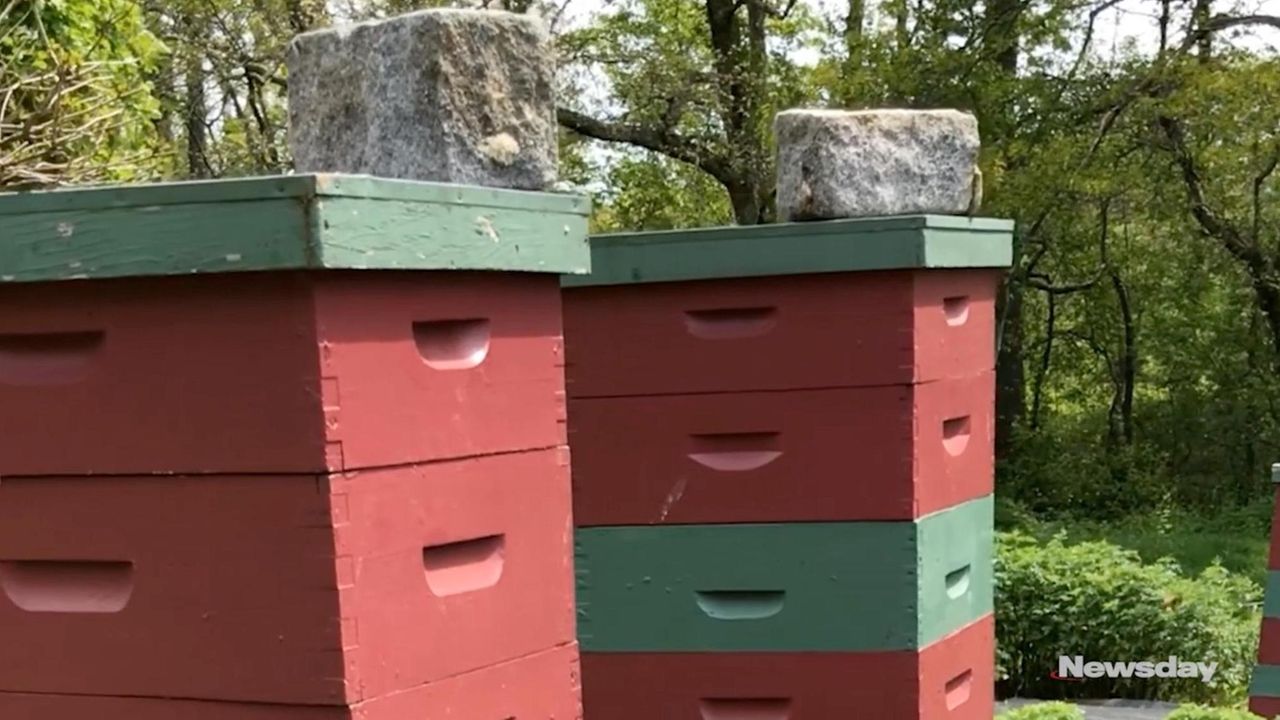 Bethpage Black master beekeeper Moira Alexander and Bethpage State Park horticulturist Victor Azzaretto teamed up to create an environment for bees to be part of a plan to cultivate and repopulate Long Island's native flora and fauna at the golf course. Credit: Newsday / Robert Brodsky

You can just feel the buzz at Bethpage Black.

Nestled quietly between the 4th and 13th holes, just a few hundred yards from where Tiger, Phil and Brooks Koepka are swinging drivers this week, 400,000 honey bees are hard at work making honey.

No, these bees are not dangerous for the all-star lineup of golfers playing the PGA Championship or the estimated 200,000 fans in attendance at Bethpage State Park. These bees were welcomed to Bethpage to help cultivate and repopulate Long Island's native flora and fauna.

"It's all about being a good steward of the environment," Victor Azzaretto, Bethpage's head horticulturist, said Friday. "It's great that a golf facility can also be a great environment for wildlife. That's what we are trying to do — incorporate the two without harming either one. The golfers can play golf without knowing that the land also benefits the pollinators."

This story of the birds and the bees began four years ago when Moira Alexander, a retired elementary school teacher, pitched an unusual idea to Andy Wilson, Bethpage's course superintendent and director of agronomy.

Alexander wanted to bring colonies of honey bees to make their home in a roughly 1-acre pollinator garden near the fairway of the 4th hole of the Black Course. Such gardens features flowers that provide nectar or pollen to pollinating insects.

Wilson agreed to the garden, and the course is now home to six colonies expected to grow in population to roughly 750,000 by summertime.

"My bees being here make a huge statement about Bethpage State Park," said Alexander, who now serves as the park's volunteer beekeeper. "Sure it's a golf course. But it's more than that. It's a polo field. It's a picnic ground. There's a lot of things for the community to come and see."

Alexander visits Bethpage every two weeks to check on her bees, which will fly around two miles, or about 8,000 acres while making honey. At the end of the season, Alexander will bottle up leftover honey not needed by the bees to sell from her front porch.

"My job as a beekeeper is to tell people they are responsible for leaving this piece of land — Long Island — better than when they found it," said Alexander, who has eight hives of bees in her Smithtown backyard, and others at Hoyt Farm Nature Preserve, Stony Brook University and in Nissequogue.

Bees, which are declining in population worldwide, are a critical part of the ecosystem and need flowers to survive. An estimated $15 billion in U.S. crops annually are pollinated by bees, including apples, berries, cantaloupes, broccoli, cucumbers, alfalfa and almonds.

Bees are also considered a good "indicator species," Azzaretto said, providing early warnings on threats to the environment. "Once there is something wrong with the bees, we know something is amiss in the environment," he said.

The pollinator garden occupied by Alexander's bees was once a dumping ground for wood chips, debris and the stumps of fallen trees.

But as Bethpage sought certification from the Audubon Cooperative Sanctuary Program around two decades ago, it carved out areas in the park to grow specific plants and flowers, such as viburnum bushes and perennials, that attract bees, butterflies and other native wildlife.

Bethpage now has six gardens across the 1,500-acre park, including on four of the five golf courses. The 1,000-acre pollinator garden located near the picnic grounds — the park's largest — is buzzing with hummingbirds and monarch and swallowtail butterflies, Azzaretto said.

Alexander said the pollinator program has been a "win-win" for the environment and the park.

"All these people … playing golf are now getting the chance to see the beauty of Long Island again," she said. "Pieces of land like this don't exist anymore. But if we do small type planting, it can make a huge difference for the native bees."

"I know it's a cliché," Azzaretto said, "but if you plant it, they will come."

John Daly misses the cut at PGA ChampionshipJohn Daly left Bethpage Black with an 11-over par on his scorecard, a controversy in his wake and a nasty limp from his arthritic right knee.

Binghamton University student from LI dies in hiking accident
Cuomo: NY 'fully back' to lower virus levels from holiday surge
1:35
For LI's vulnerable homeless population, a place to get vaccinated
EX-NYPD officer pleads guilty to obstruction in murder-for-hire plot
Parking passes for Bethpage Air Show go on sale Monday, Cuomo says
Should kids get a shot? Long Island parents differ on COVID-19 vaccine
Didn’t find what you were looking for?