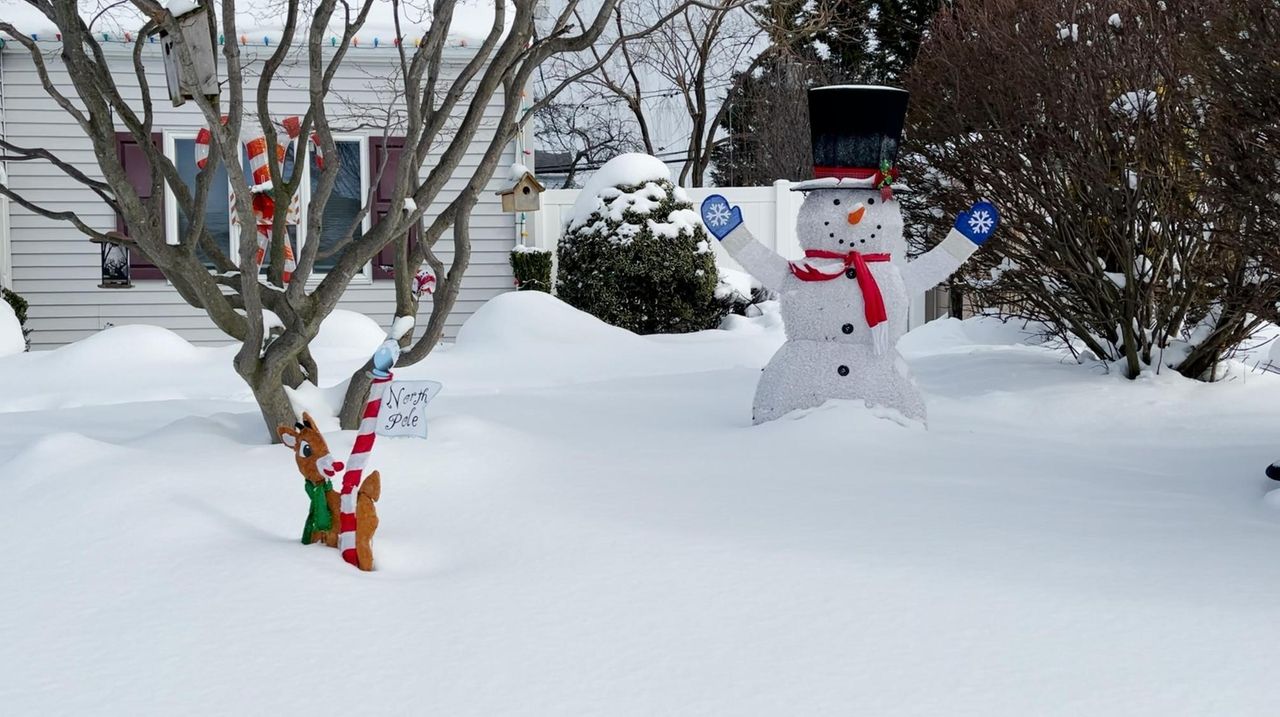 Christmas decorations on display at a Bethpage home have a special meaning for Sara Pascucci. Her father, who recently died of COVID, had decorated before falling ill. But the display, still up, drew the ire of an anonymous person, who demanded the lights be taken down. Newsday's Cecilia Dowd spoke with Pascucci and sympathetic neighbors. Credit: Howard Schnapp; Photo Credit: Sara Pascucci

Sara Pascucci took one look at the eight-word letter dropped in the mailbox of her home on Berkshire Road in Bethpage and could hardly believe her eyes, particularly after enduring the toughest month of her life.

"Take your Christmas lights down!," the unsigned typed letter read. "It's Valentine’s Day!!!!!!"

Pascucci, 31, a receptionist at a Bellmore dermatologist, was confused. Was the letter left Tuesday a cruel joke? A nosy neighbor scolding her for violating some unspoken community etiquette?

It was all too much for Pascucci, especially after COVID-19 came for two members of her family last month. She buried her father, Anthony Pascucci, 61, on Jan. 15, and her aunt, Connie Pascucci, 70, on Jan. 9 after both siblings succumbed to the virus.

"I thought it was somebody trying to be funny but considering the circumstances we didn't really find it funny," Sara Pascucci said of the letter during a news conference in Bellmore on Wednesday. "It was actually very hurtful."

Pascucci, her brother and another aunt — who live together — all contracted the virus on Christmas Eve but have since recovered.

Shortly after receiving the letter, Pascucci shared her story on the Long Island Moms Facebook page.

In the post, Pascucci described how her father always loved decorating the family's home for the holidays. She also struck a defiant tone, explaining that with all she and her family lost in January, taking down Christmas lights had become low on the priority list.

"We have been left to take care of our home now, not to mention battling all the emotions that go with this," Pascucci wrote. "We have been busy with funeral arrangements, mortgage/utility payments, and just the grieving process of it all. So yes, we haven’t gotten around to taking down his Christmas decorations. And maybe we just aren’t ready to yet. I won’t apologize for this."

And Pascucci was not alone.

Brian Kelly, who owns a home just down the road from her, received an identical letter Tuesday, also addressed only to "resident." Kelly said the letter writer has misplaced priorities during a pandemic that has claimed the lives of nearly 450,000 Americans.

"It's horrible. Lights? That's your biggest problem right now?," said Kelly, who works for FedEx. "Honestly I looked at it and I laughed. But I can understand if someone couldn't take their lights down because of a tragedy and then they see this? I'd be upset too."

Pascucci said she had no idea who wrote the letter. Kelly has his suspicions but is keeping any names to himself. The letters had no return address.

Meanwhile, neighbors on the close-knit street have rallied behind Pascucci, with many considering putting their Christmas lights back up and plugging them in to spite the letter writer. On Facebook, others have discussed lighting up the entire block with holiday decorations and music.

"It's terrible," said neighbor Eileen Shapiro. "With all the things going on out there can't you be a little nice instead of dragging somebody down because they left their Christmas lights up?"

"Nobody knows anybody's story," Cogelja said. "A lot of people are battling with COVID right now."

Pascucci said the Christmas lights, which have not been turned on since the holidays concluded, still make her smile — a reminder of better times when the family all celebrated Christmas together.

The lights also make Pascucci thinkg fondly of her dad, his ear-to-ear smile and the joy he felt decorating the home for his children.

"It's very hard to take something down your father enjoyed and put up for your family," she said. "It's tough. You really need to take time to go through things."

"Be kind to people because you never know what they are going through," she wrote. "May you never have to feel the pain that we have felt within the past few weeks. Maybe next time offer a helping hand to someone that may be in need."