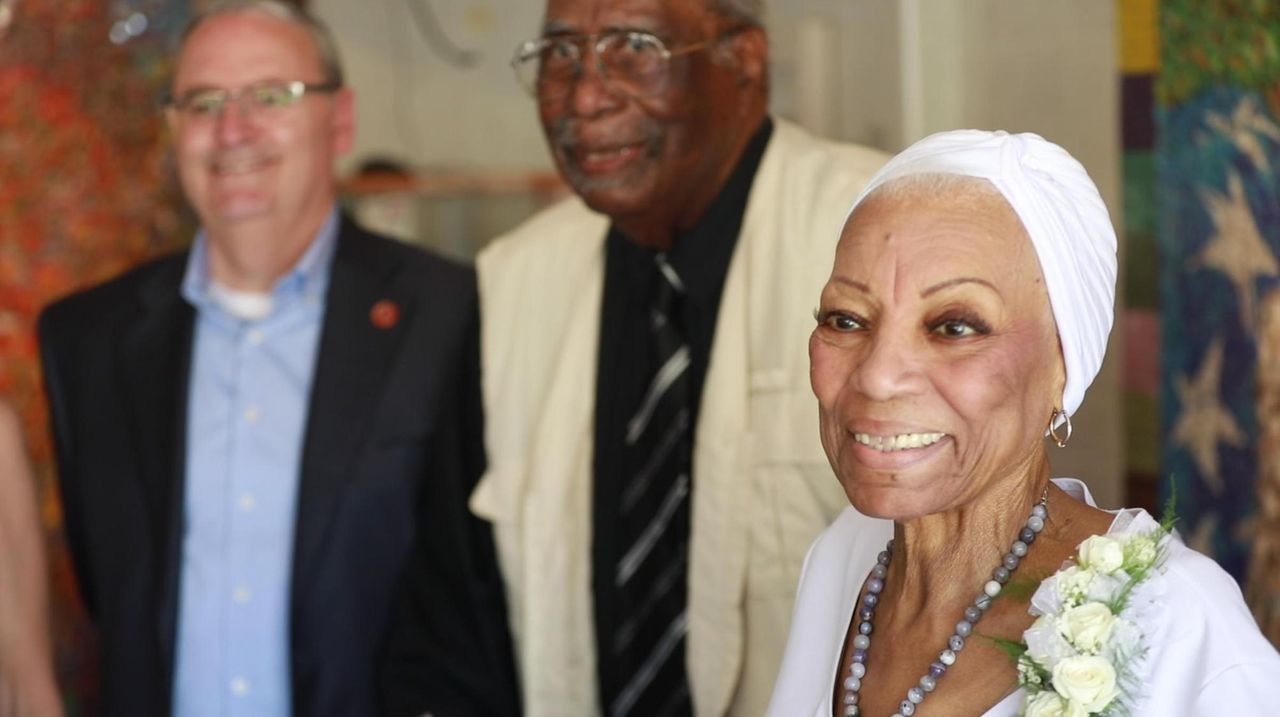 The African American Museum of Nassau County was renamed after long-time museum director Joysetta Pearse and her husband, Julius, at a ribbon-cutting ceremony on Tuesday in Hempstead. Credit: Newsday / Reece T. Williams

On Tuesday, the county renamed the museum, which is in Hempstead, the Julius and Joysetta Pearse African American Museum of Nassau County.

"Actually, I never had Black history when I was in school. I went to school in the ’40s," she said, recounting how her now-husband regaled her with his knowledge of the subject when they first met. "And I got so caught up in the things that I didn’t know — that that’s what prodded me to look deeper, and deeper, and deeper."

The couple are in their 80s.

Recent exhibitions include "Reflections: Intimate Portraits of Iconic African Americans," "The Good, The Bold, The Beautiful" (featuring art from Afro-Brazilian artist Ernani Silva) and "The Women of NASA."

The museum's roots date back to February 1968 — an exhibition for Black History Month — at Nassau Community College, set up by a Black professor, Leroy Leonardo Ramsey, according to the museum’s website.

Once the month ended, the exhibition was kept open — "due to popular demand," the website says — and Ramsey would use his own collection of artifacts to switch up what was on display.

That exhibition outgrew its home, and Ramsey established the Black History Exhibit Center in a storefront in Hempstead on Main Street.

Then, in 1984, a deputy county executive, Russell Service, and Ramsey helped found what would become the museum. It moved to 110 N. Franklin St., its current home, in 1985.

County Executive Laura Curran, who filed the renaming resolution, said: "Julius and Joysetta Pearse are trailblazing icons of Black history on Long Island, and Nassau is proud to honor their service to our county."

As for the couple's history, Julius was hired by the Freeport police in the 1960s, retiring in 1984. In 2008, Julius recalled to Newsday his first days on the job as a Freeport cop.

"I prepared myself mentally to take all the abuse that they were going to throw at me. Because I felt that again, remembering what was happening in the civil rights movement and what Dr. King was about, I said, ‘well he can take the beatings and the slapping around and the abuse, I can take a beating.’"

From the 1980s to 2002, the couple ran a private investigation firm called Jul-Joy Associates Inc. in the village, according to a 2014 profile. She’s been in charge of the museum for about a decade.

She got interested in genealogy after attending a talk on the topic at Hofstra, and the couple have used their investigative skills to connect at least 300 families with their roots, the article said.

On Tuesday, the museum sign — in black and white — was unveiled. The colors were chosen, Joysetta Pearse said, because her family spans the rainbow of colors, and, "it's black and white because we are together — Black and white and we're working together and everybody is welcome here who wants to learn something about our history."

"When these kids walk out of here," she said, "they’re floating on air."