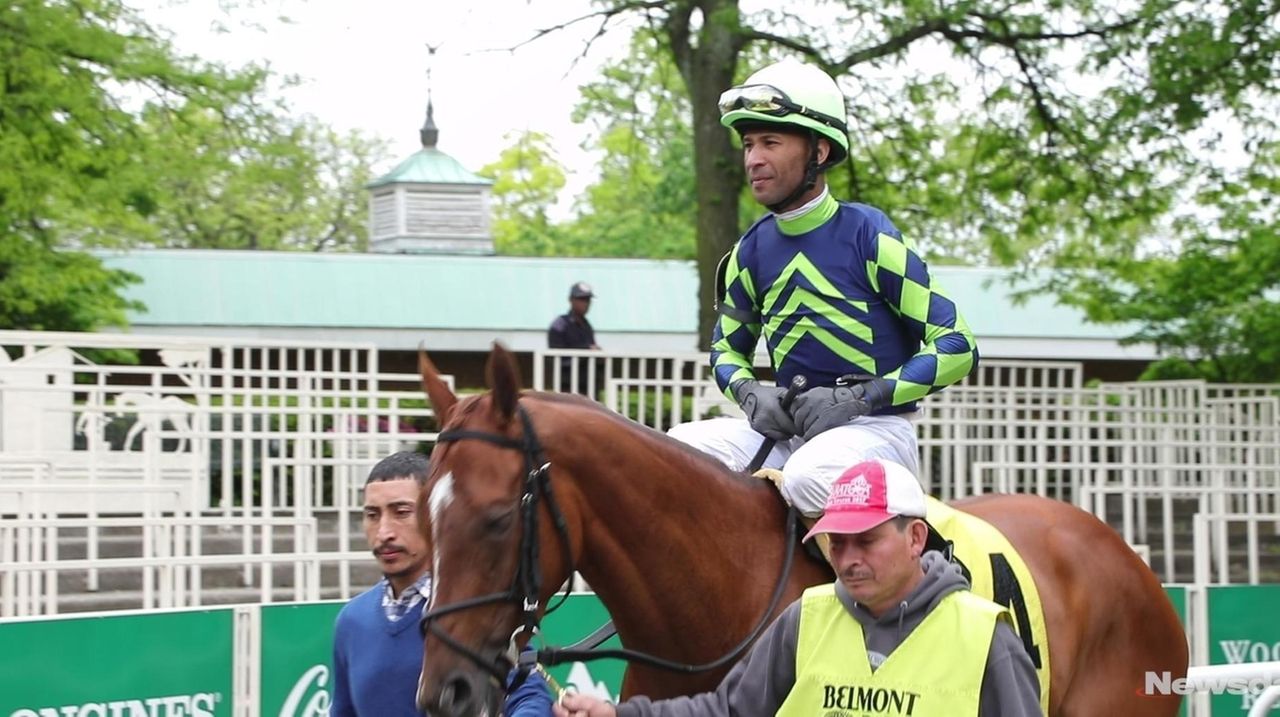 Jockey Kendrick Carmouche has won more than 3,000 races in his career, but as one of the few African-American jockeys riding today, he is virtually unknown outside of hard-core racing fans. On Saturday, Justify is hoping to grab the Triple Crown with a win in the Belmont Stakes. Carmouche will compete in three undercard races before the big race, but his ultimate goal is getting a ride in the Stakes. Over a century ago, African-American jockeys were not only competing in Triple Crown races, but winning them. Credit: Newsday

The first time Kendrick Carmouche sat on a horse he ended up underneath its withers, desperately holding on as the thoroughbred took off.

His father stopped the horse and asked his son if he was all right.

His father propped him back up. This time, the 9-year-old stayed upright — and fell in love with the exhilaration of riding a horse.

“Ever since then, I was off and running,” said Carmouche, 34, who grew up in Vinton, Louisiana, and now lives in Long Beach. “My daddy was a jockey. . . . He never did ask me if I wanted to ride, but I always had it in my heart to ride racehorses.”

Carmouche has won more than 3,000 races. Since 2015, he has competed full time on the New York Racing Association circuit — Aqueduct, Saratoga and Belmont. Still, as one of a few African-American jockeys riding today, Carmouche is virtually unknown outside hard-core racing fans.

On Saturday, Carmouche will compete in three undercard races before Triple Crown hopeful Justify makes his run in the Belmont Stakes.

Carmouche’s ultimate goal is getting to mount the “good horse” in the Stakes, just like Justify.

And racing experts see Carmouche as a jockey whose time will come after he pays his dues on the New York circuit.

“He can ride with the best of them,” said trainer Eddie Barker, who has worked with Carmouche often.

An African-American rider hasn’t won the Belmont since 1894, but horse racing was once dominated by black riders, sports historians and experts say. Many of the top jockeys and trainers during the early era of horse racing were former slaves or descendants of slaves.

Jockey Willie Simms is the only black jockey to win the Kentucky Derby, the Preakness Stakes and the Belmont, the three legs of the Triple Crown, and his contributions to the sport lives on. He introduced the “short” style of riding — leaning forward, in a crouched posture — that all jockeys use today.

“The African-American jockeys were the first extraordinary professional athletes, the way LeBron James is today,” said Katherine Mooney, an assistant professor of history at Florida State University and author of “Race Horse Men, How Slavery and Freedom Were Made at the Racetrack.”

The success of the black jockeys frightened their white counterparts, Mooney said. They ‘‘would gang up on black jockeys, box them in so the horse couldn’t run. White jockeys felt they shouldn’t be on the same track with blacks.”

The history of success among black jockeys is not lost on Carmouche.

On Martin Luther King Day last year, Carmouche won the Toboggan Stakes at Aqueduct. The horse, named Green Gratto, is owned and trained by Gaston Grant, who is also black. The trophy was presented by Sentell “Sonny” Taylor, a placing judge who has worked at Belmont since 1964. Taylor, too, is black.

In an interview, Taylor recalled how he looked at Grant and Carmouche and said, “Boys, this probably will never happen again,” referring to the fact that they were all African-American.

Before coming to New York three years ago, Carmouche won seven riding titles at Parx Racetrack, outside Philadelphia, including four straight from 2008 to 2011. In 2017, he won the New York Racing Association’s Mike Venezia Memorial Award, given to the jockey who exemplifies extraordinary sportsmanship and citizenship.

“My mom and dad always wanted me to leave Louisiana because they knew I had a better chance at being successful,” said Carmouche, who is married with two children. “I’ve been in Philadelphia and at the smaller tracks, surviving all those years and winning races all over the country.

Yet, he still isn’t getting mounts in the major races.

“I don’t see why I wouldn’t get the chance,” he said. “When that does happen, I am ready for it.”

Carmouche said he has endured racial epithets over the course of his career, even on occasion at Aqueduct.

“Did I run across people that I thought was that way — yes,” he said. “Did they eventually come to the other side to respect me and hug me and shake my hand — absolutely.”

Like his father, Carmouche plans to keep riding — and waiting for that one good mount.

“I believe in my heart that I am just as good as anybody if given the opportunity to ride the same horses those guys ride,” he said. “Now will that happen, I don’t know. But I am going to keep working hard to see if it’s going to happen. That’s what I have been doing all my career.”

As the sport rose in American culture, so too did the role of African American jockeys.

The first Kentucky Derby was run in 1875 and 13 of the 15 jockeys were African-American.

Oliver Lewis, won the race aboard Aristides. Lewis and Aristides took second place in the Belmont Stakes in 1875.

Oliver Lewis, Willie Simms and Jimmy Winkfield were among the premier riders of that era, earning as much as $20,000 a year.

Jackie Robinson integrated Major League Baseball in 1947, but these riders were winning Triple Crown races just a few years after the 13th Amendment abolished slavery in 1865.

50 Belmont Stakes questions for fans, neighsayersIn honor of the 150th running of the Belmont Stakes, here's a complete guide to race day logistics, the history of the event and more.

Officials: Swimming allowed at LI beaches after shark concerns
State: Districts can return to local control on masking, social distancing
Gene Cook's name will appear on ballot, judge rules
These restaurants, businesses, colleges and NYC theaters will be requiring COVID-19 vaccines
More people have died of COVID-19 in NY than state publicly reports, fed data shows
2:22
Number of COVID-19 patients in LI hospitals on rise
Didn’t find what you were looking for?