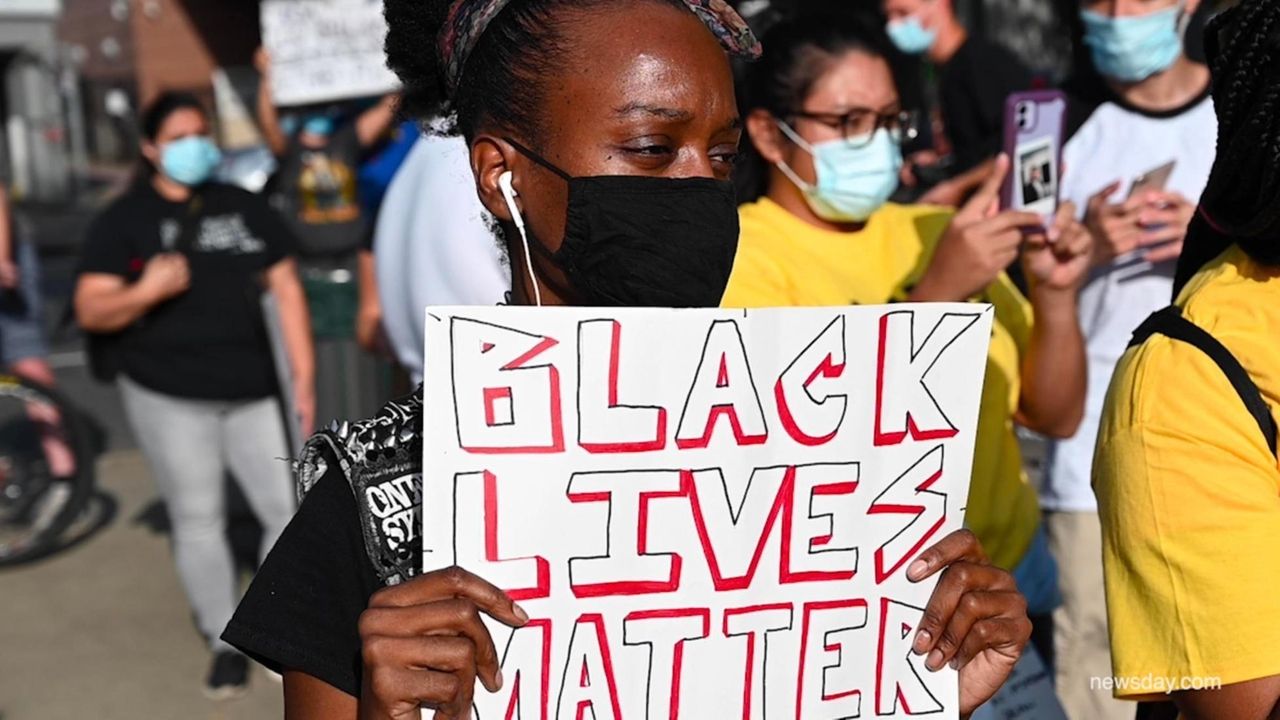 More than 100 demonstrators gathered in Merrick on Wednesday to demand justice for Jacob Blake, a Black man who was shot multiple times by police in Wisconsin. Credit: Newsday / Steve Pfost

Black Lives Matter protests that had ebbed on Long Island reemerged Wednesday as more than 100 demonstrators rallied in Merrick to demand justice for a Black man shot multiple times by police in Wisconsin.

Since the Sunday shooting of Jacob Blake, 29, by officers in the Wisconsin city of Kenosha, protests there have continued, reigniting allegations of police brutality that led to demonstrations on Long Island and nationwide after the May death of George Floyd while in the custody of Minneapolis police.

“Jacob was one of us,” said Jay Vegas, 37, an activist from Freeport who attended Wednesday's protest. “This racism has to stop. … We are going to be the generation that ends racism. That’s why we are standing out here.”

By 6:30 p.m., protesters had arrived at a gazebo near the Merrick Long Island Rail Road station to decry what they called just the latest evidence of police brutality.

“Jacob Blake is only the most recent example. There had been plenty,” said Terrel Tuosto, a West Hempstead organizer, addressing a crowd, many of whom raised Black Lives Matter signs and flags with the same message. A couple of protesters also held American flags.

“The [fact] Jacob Blake will no longer be able to run along with his kids anymore and play with them is a life ruined because a police officer took it into his own hands to say, 'I am the judge, I am the jury and I am the executioner, ' ” Tuosto said. “It’s not the way that the United States of America is set up.”

The passionate speeches of protesters were intermittently interrupted by the rumble of passing trains. A man driving down Merrick Avenue repeatedly yelled “Blue Lives Matter” — a refrain popular among groups supporting law enforcement — while waving a miniature American flag from his car window.

The demonstrators also marched down Merrick Avenue chanting in call and response, “say his name” “Jacob Blake.” Curious homeowners standing on their lawns looked on as marchers passed while chanting “wake up, wake up, this is your fight too.”

Blake's injuries in the shooting, reportedly witnessed by his three young children, have left him paralyzed from the waist down, his family and attorney said Tuesday.

“The fact it happened in front of his family and children was sickening,” said Carly Werner, 23, of Northport, before the rally started. “Noncompliance is not a death sentence or shouldn’t be, at least.”

Cellphone video that captured the shooting showed Blake walking away from police around the front of a gray SUV to the driver’s side. As Blake opened the door and leaned in, an officer grabbed his white tank top and opened fire from behind. Seven shots could be heard.

Police said the officers were responding to a domestic incident. The Wisconsin Department of Justice, which is leading the investigation, identified the police officer who shot Blake as Rusten Sheskey. In a news release Wednesday night, the agency also said its agents recovered a knife from the driver's side floorboard of the SUV Blake tried to enter when the officer shot him.

For Werner’s friend, Catherine Rocioppi, 24, of Melville, her call for racial equality is personal.

“For me, it hits a little hard because I’m marrying a Black man, so my children are going to be white and Black,” she said. “I’m going to deal with this fear of my child being killed just because of the color of their skin. It makes me want to change the world for my future babies.”

As someone who’s studying to become a special-education teacher, Victoria Marchetta, 24, said she was protesting for her future students.

“I don’t want to be complicit by doing nothing,” said Marchetta, of Northport. “If you do nothing, you are complicit.”

Wednesday marked the first rally for Maia Goveia, 16, and her mother, Sharlina Goveia, 44, both of Baldwin.

“[With] the protests, you’d think it was enough, you’d think they’d stop,” Maia Goveia said. “But it happened again. So I feel like it was just unfortunately further motivation” for her to come out.