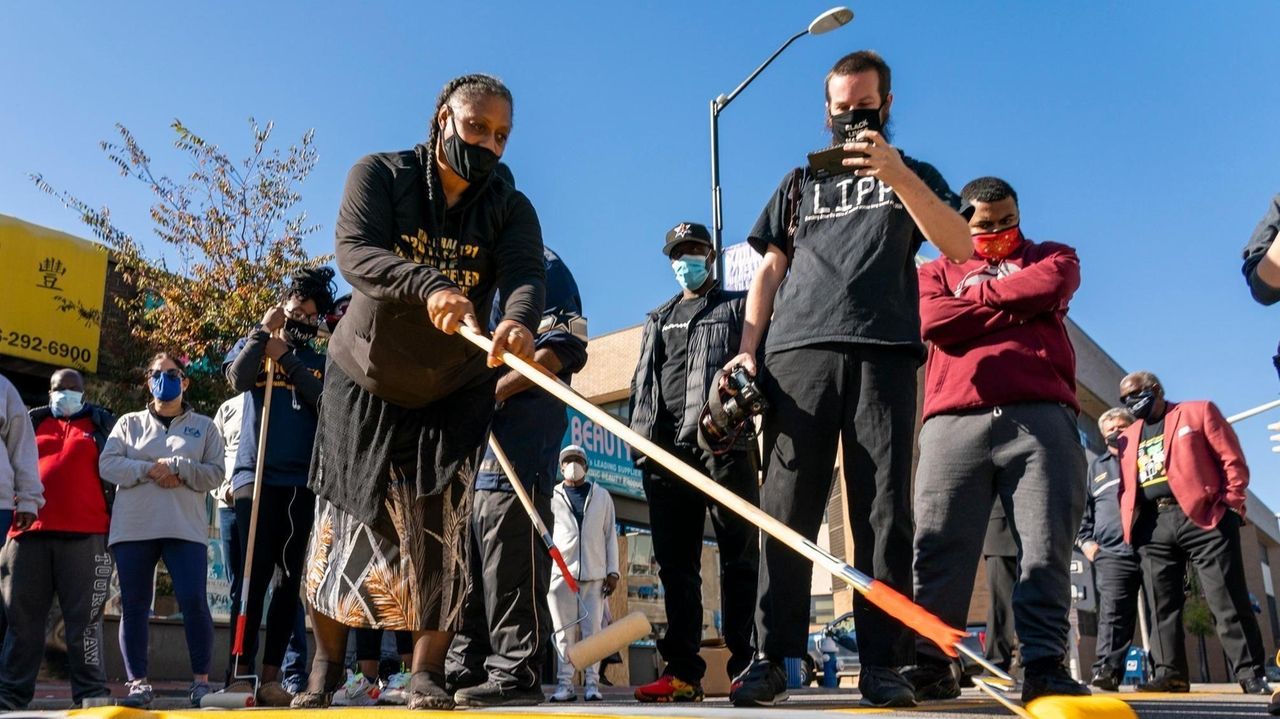 Volunteers gathered in the Village of Hempstead on Saturday to paint "Black Lives Matter" on the pavement of Main Street between Jackson Street and Fulton Avenue. Hempstead Mayor Don Ryan spoke to Newsday about the importance of the message for the community and Long Island.  Credit: Corey Sipkin

The message of Black Lives Matter became a lot more visible Saturday after Hempstead Village painted the three words on its Main Street.

The letters spelled out in yellow road paint cover the section of Main Street from Jackson Street to Fulton Avenue and passes the Nassau County District Court.

Edwina Ford’s 5-year-old daughter Nijah Roberts, of Hempstead, was one of the passersby who stopped and helped paint the letter "L."

Saturday’s street painting came four months after officials unveiled a new street sign to add the ceremonial name "Black Lives Matter Way" to a section of the Main Street in recognition of ongoing activism against police brutality and racial inequality.

Across the country, similar murals have been painted in cities like Los Angeles, Dallas, Washington, D.C., and New York City, including one in Queens that Jada Robinson-Orr, 11, saw.

"Well, who wants to travel all the way there when we have Black Lives Matter right here?" said Robinson-Orr, who joined the crowd to paint along with her sisters Arianna Robinson-Taylor, 5, and Mariah Robinson, 8. "You can walk [on it] and see it. You can take a picture of it. You can do a lot with it."

Robinson-Orr’s mother, Alexis Robinson, 30, of West Hempstead, said she comes to Main Street every day and they are glad to see the new mural in their own community.

"It feels good," Robinson said. "It makes you think that … people care about our lives."

Hempstead, a village with more than 55,000 residents, 94% of whom are Black or Hispanic, has seen protests in recent months following the killing of George Floyd in Minneapolis in May.

Officials and supporters of the mural said it serves as a physical reminder to all.

"It sends a message to everybody that enters [the courthouse] and all of the people that travel on the street," Hempstead Mayor Don Ryan said. "It reminds them that all lives won’t matter until Black lives matter."

The mayor also noted that the village has created a police reform committee with 22 members, and details are to come next week in a public announcement.

Kira Bryant of Westbury, a social worker who volunteered to paint Saturday, said the mural and the message it contains reflect the reality of today.

"If one day it’s ever acknowledged that we are all equal and we are all human, then maybe murals like this one would not be necessary," said Bryant, 41. "But until that day, the denial of it is not going to make it go away."