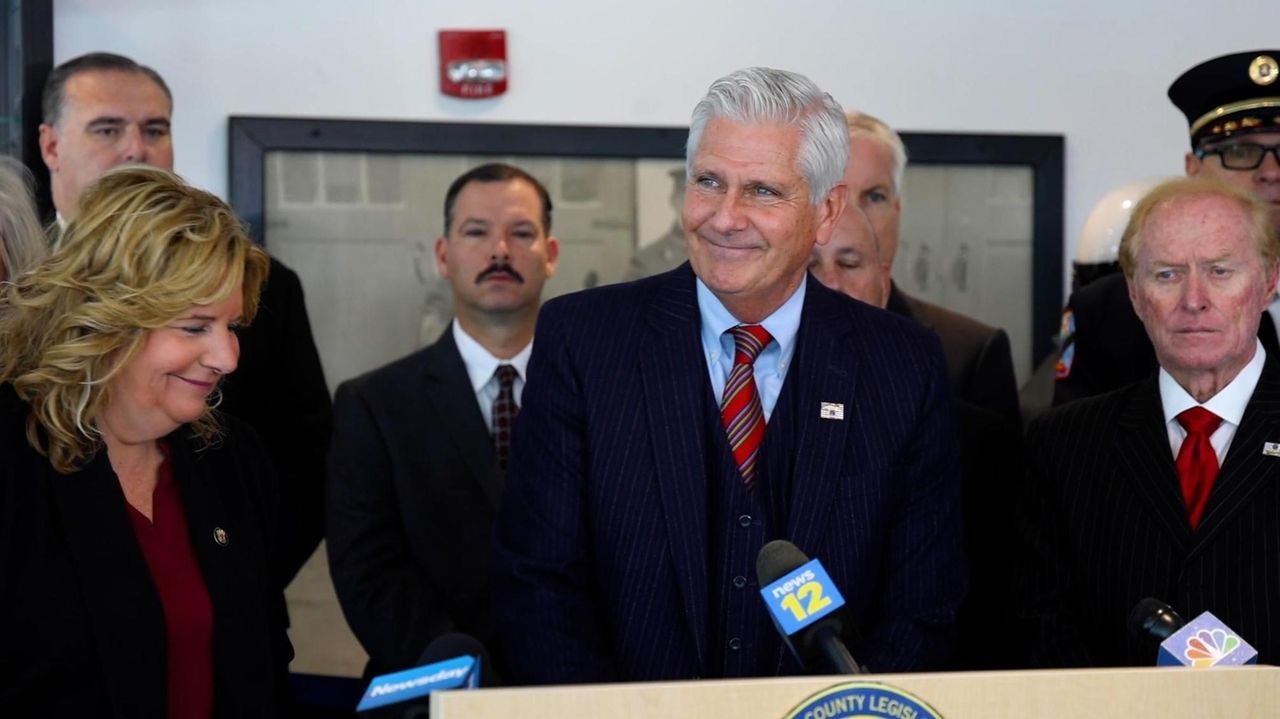 Nassau County Executive-elect Bruce Blakeman, who depicted county crime rates as "out of control" during his campaign, has chosen to keep Nassau County Police Commissioner Patrick Ryder as the county's top cop when he takes office on Jan. 1.

Flanked by Republican politicians and law enforcement officials Tuesday at a Garden City news conference, Blakeman said Ryder "has the knowledge, the expertise, and the leadership skills to continue leading our men and women in blue. What I especially like about Commissioner Ryder is the fact that he is known as the 'Energizer bunny,' he has unbounded energy, he works hard, he is open 24/7 and he is a tireless, tireless worker for the public safety of this county."

Frederick K. Brewington, a civil rights lawyer who once had called for Ryder's firing, told Newsday that Ryder's selection "shows a lack of interest in the community that remains underserved and remains over-policed" and displayed a "lack of sensitivity to the issues following the death of George Floyd. It is a disappointment beyond disappointments."'

But Ryder in his remarks at the news conference at the David S. Mack Center for Training & Intelligence on the Nassau Community College campus heralded the department's efforts to reform policing.

Ryder referred to the county's 424-page reform plan, filed April 1 under a state executive order requiring local police departments to eliminate bias in their ranks and over-policing in communities of color.

Ryder, a 35-year veteran of the department, became acting commissioner under former County Executive Edward Mangano, a Republican, in 2017. A year later, Curran, a Democrat, selected him for the permanent post.

In the weeks before the election, Blakeman depicted Nassau as suffering from rising crime rates. In an Oct. 26 Facebook post, his campaign referred to a shooting in Baldwin, saying "crime is out of control."

Nonetheless, Blakeman said there was no need to drop Ryder.

On the subject of the county's police reform plan, Blakeman said he was "very confident the plan that was submitted is a good plan."

In June, civil rights activists had criticized Ryder for comments he made in an interview with Newsday linking the lack of diversity in Nassau's ranks to what he characterized as the tendency for Hispanic and Black job candidates to come from "broken homes."

After Newsday published its story, Ryder apologized for his remarks, saying: "My comments were not to paint any community with a broad brush. And if I offended anybody, I apologize."

Activists held rallies calling for Ryder's firing, while his supporters also gathered to urge keeping him. Curran said she disagreed with the remarks, but believed calls for his firing were unfair.

Activists criticized Curran and Ryder's final plan in large part for failing to include a provision for external reviews of police officers, including a civilian-led review panel and an office to investigate police misconduct.

Brewington told Newsday that their plan failed to incorporate meaningful reforms sought in the months after Floyd's death.

"When you hire the same person who resisted that, and who turned his back on people who were saying we're willing to work with you, that is something that is totally unacceptable," he said.

"I think it's going to be business as usual," Shanequa Levin, co-founder of LI United to Transform Policing & Community Safety, told Newsday. She said there likely will be "no real accountability, no real transparency, no one saying that the police department really needs to look at how it addresses racism."

In a statement after the news conference, Blakeman told Newsday: "The Nassau County Police Department has a long history of community service. We have seen a rise in crime throughout the nation and it’s knocking on our doors to the west — a result of changes in state law. I expect an even higher level of performance from the commissioner to keep us moving in the right direction."

"I was nervous because it’s a challenge," Ryder said. Blakeman has "already challenged me. He said to me, I want to lower crime again and I said OK. We did it three years in a row, two years in a row, and this year looks like we’re gonna lower it again. And now I gotta do it again."

Ryder said he would continue his emphasis on data-driven policing and outreach to the community.

"We’ve seen our activists very active in the last two years and they’ve given us a lot of messages that we need to listen to," Ryder said. "If we’re going to get better, we have to listen to everybody. We’re not always gonna agree, but we’re gonna listen."

Ryder acknowledged he fielded potential job opportunities outside of the police department after Curran’s loss, but said he always wanted to remain as Nassau's top cop.

"There was some interest that came out on a federal level and a state level and I’ll keep them private to myself," Ryder said. "But they asked for resumes. Obviously I always keep my doors open, but this is the job I want."