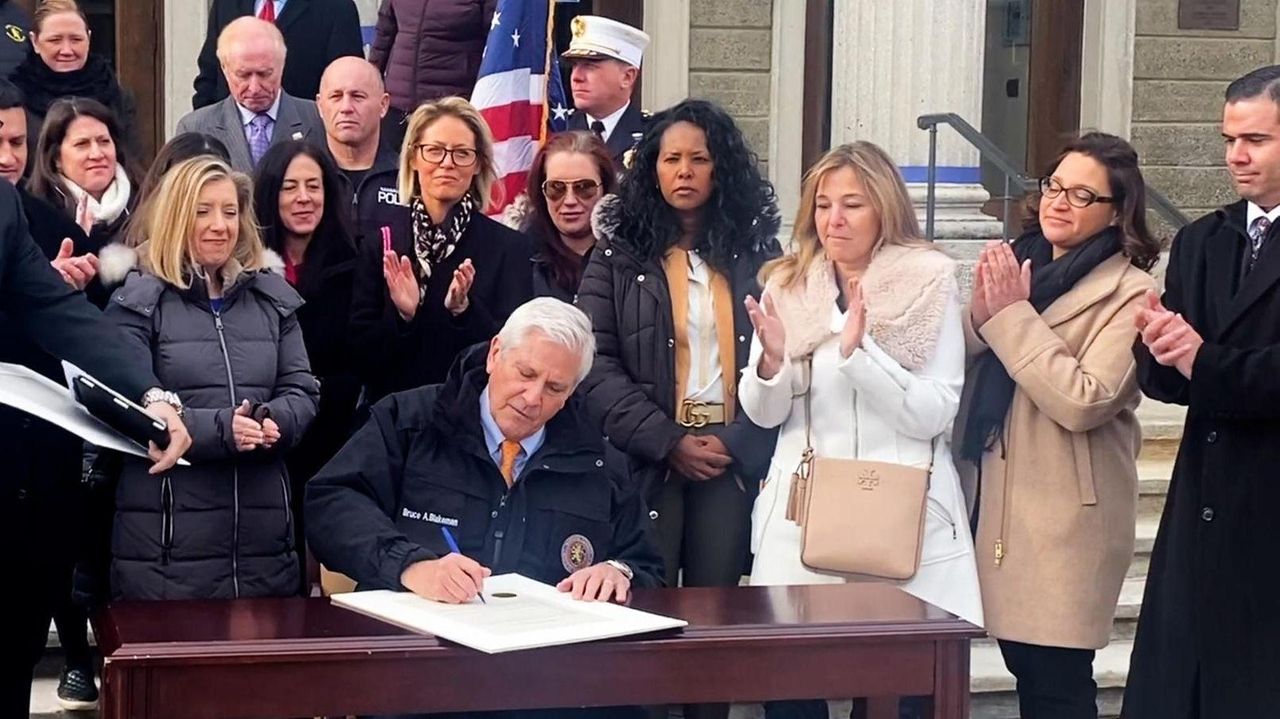 Blakeman's order, signed at a news conference in Mineola with opponents of the state’s mask mandate, argues, without medical evidence, that masking children "may lead to negative health and societal ramifications" and that forcing children to wear facial coverings could inhibit breathing and lead to other long-term medical problems.

"Parents have a fundamental right to make health care decisions on behalf of their children," said Blakeman, a Republican who took office this week. "Government may not infringe upon these rights without a compelling reason. School boards are comprised of elected officials who make decisions based upon the unique circumstances of each district. They are in the best position to make these decisions, not an autocracy in Albany."

While language in the order appears to direct school boards to vote this month whether to abide by the mandate, county officials said there is no requirement they conduct a vote at all.

Hochul, a Democrat, signed an order in August requiring everyone in schools to wear masks, regardless of their vaccination status. The order prompted a host of lawsuits that were ultimately rejected by the courts.

At a news conference Thursday in New York City, Hochul issued a veiled threat to withhold state education funding to any district that disobeys the state rule.

Blakeman is "attempting to assert authority with respect to what has already been declared a public health emergency," Hochul said. "People who have more experience in county government would know that state government, state laws prevail. There’s also the issue of the state Education Department, which has direct control over funding of schools. I hope I don’t need to say anything more on that topic."

"This particular directive does not have legal authority behind it," he said. "But, it does place school districts in a very untenable position. … Assuming that one was not a believer in mask mandates, then you would welcome this county executive’s order. But school districts aren’t really free to follow it because the state has already spoken."

Blakeman said his order is legal based on the county’s "home rule authority" preventing the state from imposing unreasonable restrictions on parents without a compelling reason.

"Our county is larger than nine states and we don’t need people in Albany telling us what we should be doing here in Nassau," said Blakeman, adding that county police would no longer enforce the mandate.

Blakeman signed two other orders Thursday: the first codifying that Nassau will not comply with the state's mask mandate for indoor businesses, and the other allowing county employees to opt out of wearing masks on the job.

Long Island is seeing among its highest number of daily COVID-19 cases since the early days of the pandemic, with the seven-day average positivity rate Wednesday nearing 27%. At least 10 Long Island school districts temporarily turned to virtual instruction this week because of the high number of cases.

"Overall this is just not well-advised from a public health perspective," said Martine Hackett, director of public health programs at Hofstra University. "I would wonder where the county executive got his information to say that this was acceptable and safe, especially with the surge in coronavirus positive cases."

But Margaret Marchand, vice president of the Locust Valley school board and an opponent of the mask mandate, said the order makes sense.

"Our schools are not the ones spreading this," she said. "Our students are safe. … Children being in masks in school all day long without mask breaks is causing anxiety and depression."

The issue of masks in schools has set off debate, with some saying face coverings interfere with children’s education while making it hard for them to breathe. Others say masks prevent spread of the virus and potentially hospitalizations and deaths of children. The Centers for Disease Control and Prevention recommends universal masking by all students.

Eisenstein has been a proponent of masks to reduce transmission of the virus but said the science is unclear whether they stop the spread of the omicron variant.

"School districts have to do what’s best for them," Eisenstein said. "You are starting to see with omicron there are questions of what level of masking is better than other levels. So we are waiting for more clear science."

Suffolk County Executive Steve Bellone, a Democrat, said he won't sign a similar order, noting that "masks are a common-sense way to help reduce transmission of the virus."

School boards in a tight spot

"I don't see any school district disobeying or being defiant to the governor," Dillon said. "They could be removed from the school board. A superintendent that would support this could lose his or her certification. Our job is to follow the law. The law comes from the governor on this issue, not from the county executive."

But Kerry Wachter, president of the Massapequa school board, left the door open for a challenge.

"The board will consult with our administrative team, legal counsel, community and staff to ensure that we institute a sound plan that supports the health and safety of our students and personnel," Wachter said.

Tonie McDonald, president of the Nassau County Council of School Superintendents, said her members "need to discuss the import of this order with our boards of education before making any statement on this issue."

In a letter Thursday, Michael Kelly, president of the Nassau-Suffolk School Boards Association, urged Blakeman to withdraw his order.

"Counties have no more authority to direct school board matters than do schools to legislate county affairs," Kelly wrote. "The rules of comity are designed to prevent regulatory and legislative chaos."

The order makes it seem "like the school boards have a choice," said Nassau Minority Leader Kevan Abrahams (D-Freeport). "They don't have a choice. They operate under the Department of Education."

"To have them be subjected to more people attacking them, it's throwing a grenade into an already challenging situation," she said.

Andy Pallotta, president of the New York State United Teachers union, said "now is not the time to do away with mask wearing in schools. Public health experts have been unequivocally clear that masks are an important part of the strategies designed to keep students, educators and our communities safe."

Meanwhile, Nassau will distribute KN95 masks, on request, to any school district employee who requests one. Blakeman, who is skeptical that masks prevent the spread of COVID-19, said the distribution is not delivering a mixed message.

See the number of COVID-19 cases in your school districtLong Island schools have reported thousands of positive COVID-19 tests among students, teachers and staff, state data shows. See the numbers in your district. Some LI districts see high student absence rate amid COVID-19 surgeThousands of students on Long Island are staying out of school during the COVID-19 omicron surge, officials said Tuesday, as the state hit its highest level of hospitalizations since April 2020. Schools go virtual due to staffing shortages; bus routes delayedAt least nine of the Island's 124 public school districts went to remote instruction as part of a cautious return from the holiday break for hundreds of thousands of students and educators amid the omicron-fueled COVID-19 surge.