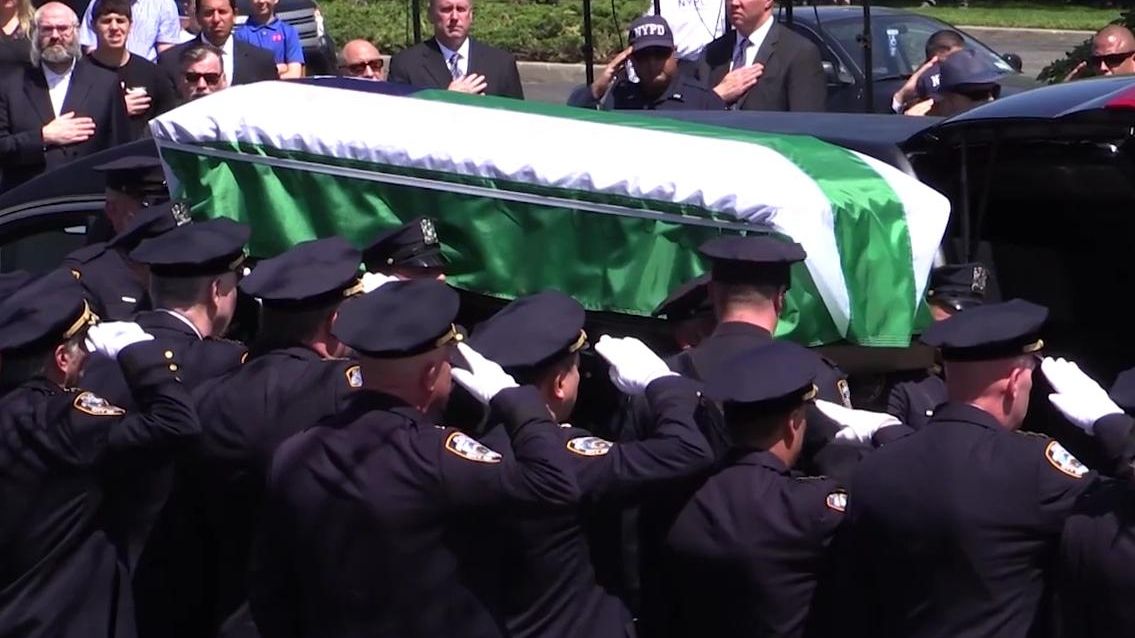 Surrounding the Seaford church where the slain NYPD officer from Long Island had just been proclaimed "an American hero" was a sea of blue -- an extended "family" of thousands of fellow cops.

The retired NYPD sergeant who inspired his son to take the police entrance exam at 17 had listened to a series of emotion-charged eulogies Friday at St. James Roman Catholic Church.

Brian Moore, 25, was shot in the head in the line of duty the night of May 2 while on a plainclothes patrol in Queens Village. The Massapequa native died two days later; the suspected gunman has been charged.

In his eulogy, New York Police Commissioner William Bratton said he's been to too many funerals for fallen officers.

"I remember them all. All cops do," he said. "And each fills us with a deep sadness, to have lost a cop too soon. We are left to take solace in each other, in our family in blue, and in remembrance of the one we've lost."

"We are united today as a family," Msgr. Robert J. Romano, an NYPD chaplain, said during the homily. "A family of blood. A family of blue and the American family."

Moore, assigned to an anti-crime detail in the 105th Precinct, graduated from Plainedge High School and still lived in the Massapequa home where he was raised. He joined the NYPD nearly five years ago.

Bratton's voice cracked as he honored Moore with a posthumous promotion.

"And so with great honor and great sadness, I posthumously promote . . . ," Bratton began, pausing to collect himself, " . . . Police Officer Brian Moore, shield 469, to detective, first grade."

The announcement drew a standing ovation that lasted about 30 seconds. Filling the church were about 1,000 mourners -- including relatives of other officers killed in the line of duty.

In the pews were the mother, father and wife of NYPD Det. Wenjian Liu, who was fatally shot in December along with Det. Rafael Ramos in the Bedford-Stuyvesant section of Brooklyn. Seated nearby -- in a wheelchair -- was NYPD Det. Steven McDonald of Malverne, paralyzed from a 1986 shooting.

"He was brave, for sure," de Blasio said. "But his bravery was matched by his compassion. And he came by it through his family. It's in his DNA -- from a family so devoted to the NYPD, his father and uncle both retired sergeants and his three cousins police officers -- one in the NYPD, two in police forces in Long Island."

Bratton said Moore was practically born blue and "dreamed of being a cop."

"He had an eye for the street -- he could smell a gun, as they say," the police commissioner said.

Bratton forgave Moore for being a Baltimore Orioles fan and praised the young officer's dedication, calling him a consummate professional.

When Moore, who previously worked in the 103rd Precinct, moved to the 105th, his cousins "told the guys at the precinct to look out for him," Bratton said. "But word got back, 'We don't have to look out for him -- he's a cop, through and through.' "

Other officials in attendance included Sen. Charles Schumer (D-N.Y.), Rep. Peter King (R-Seaford) and Nassau County Executive Edward Mangano. They were joined by Long Island residents and officers from the NYPD, Nassau and Suffolk police departments and law enforcement agencies from across the United States and Canada.

Shortly after 11 a.m., a line of police motorcycles arrived, followed by the hearse.

Inside the church, Romano sprinkled holy water on the coffin, a symbol of Moore's baptism.

Moore's mother, Irene, stood near her husband and their daughter, Christine, who cried audibly.

"We might ask ourselves: Where was God last Saturday?" Romano said. "I can tell you he was in a young man named Brian, who accepted a call, a vocation . . . to be a peacemaker, to be a cop and to be a hero. Brian, like so many of his brother and sister officers, ran always into the trouble, not away from it."

Joining the sea of blue outside the church were ordinary citizens touched by the tragedy.

Jill Marie Delano of Bethpage pulled her sons, David, 15, and Jonn, 13, out of school to attend the funeral.

Delano said she attended the funeral of slain NYPD Officer Edward Byrne in 1988. Byrne, who lived on the same street as Moore, died at age 22. His funeral was held at the same church.

Many years later, she wanted her children to witness the show of brotherhood among officers and support given to the family.

"I wanted them to see the respect and that the community comes together," she said.

Her sons wore blue T-shirts featuring the words "Be Moore" with a black-and-blue band across the officer's badge number, 469.

Joan Accetta, 77, of North Seaford, who attends the church, stood in the parking lot watching the service on a large screen. A blue ribbon was pinned to her chest.

"I'm just overwhelmed with the police that came from out of state and around the country. I think it's wonderful," she said, choking up.

A Wyoming cop, Lincoln County Sheriff's Deputy Caleb Ellis, 27, said he and two other deputies came to "show our support to the fallen officer, to their family, to their department, to law enforcement in general."

After the service, nine police helicopters flew overhead as "America the Beautiful" played.

The hearse then headed to St. Charles Cemetery in East Farmingdale to lay Moore to rest -- past the throngs lining the streets and trees wrapped with blue ribbons. With John Valenti

"Once more we find ourselves together in mourning. It is too soon since the last time, much too soon. The Moore family is an NYPD family and I know they felt the double blow in December, as all of us did. This today is too soon. But . . . it's always too soon when a police officer dies."

"Brian's death comes at a time of great challenge in this country. For police officers across the country, they're increasingly bearing the brunt of loud criticism. We cannot be defined by that criticism because what is lost in the shouting and the rhetoric is the context of what we do. A handful of recent incidents -- fewer than a dozen -- have wrongfully come to define the hundreds of millions of interactions cops have every year, when you help and you protect, when you offer security and bravery and compassion. What is lost is officers like Brian Moore, and the people he served and protected."

"The policing of any community, of any city, is not solely incumbent on the police. What is lost is that public safety is a shared responsibility. In our democracy, it is our government's first obligation. But it's not entirely the government's burden alone. We all have a fundamental right to live free from fear, free from crime, and free from disorder, but while we share that right, we also share the duty to secure it. We all share the responsibility of adherence to the law -- community and police alike. We share the responsibility of keeping each other safe -- community and police. It was Brian's dream to do his part.

"My dream is a city where every officer and every citizen does the same. Despite all the shouting, all the rhetoric, we're closer to that reality than people might think. Because there is a truth that most citizens know: The vast, vast majority of cops go out onto the streets to be your police.

"So today, let us say farewell to Detective Brian Moore as he begins his journey to a new assignment. A hero of the city, a guardian at the gate of New York City."

"We're all gathered in one purpose, to mourn the loss of a great man, a young man, but a very great man, Officer Brian Moore. And we all are heartbroken, as are the people of our city.

"Wherever he was, whatever he was doing, he talked about the job and what it meant to him. He was excited about it. He knew that he was making the city safer, he knew he was making a difference in people's lives, and it energized him.

"Last Saturday, Brian showed the courage and the dedication he had always shown, and he made the ultimate sacrifice while keeping our city safe."

"Time heals all wounds. Please never believe that. As we say in Brooklyn: It ain't true. And it's not true because evidently the person who said it for the very first time never lost anyone that they loved because if they did . . . they would know that a part of their heart is taken away. There's an empty spot there, that's why we call it a broken heart. We learn to get on with our lives, we learn to do the things that we have to do, but the wounds are always there and they'll always be with us."

"Brian is not a hero just because of what happened on Saturday. He is a hero along with his partner Erik and the millions of past and present and future men and women who have and will don the blue uniform and the shield of the NYPD."

Officer's funeral to result in road closuresNassau County police said motorists should prepare for area driving and parking restrictions, road closures and traffic delays due to the wake Thursday in Bethpage and funeral Friday in Seaford for slain NYPD Officer Brian Moore, a 25-year-old Massapequa native. Officials: 30,000 officers expected at cop's funeralMore than 30,000 police officers from across the country and Canada are expected to descend on Nassau County to attend the wake Thursday and the funeral Friday for slain NYPD Officer Brian Moore, officials said. Official: NYPD cop shot in head was 25-year-old LIerA New York City police officer from Long Island was shot in the head in Queens Saturday night and surgeons were fighting to save his life. DA: Accused shooter has history of violenceDemetrius Blackwell, 35, is facing charges of attempted first-degree murder, assault and weapons charges in the shooting of NYPD Officer Brian Moore, 25, of Massapequa. Blackwell faces life in prison if convicted, prosecutors said.