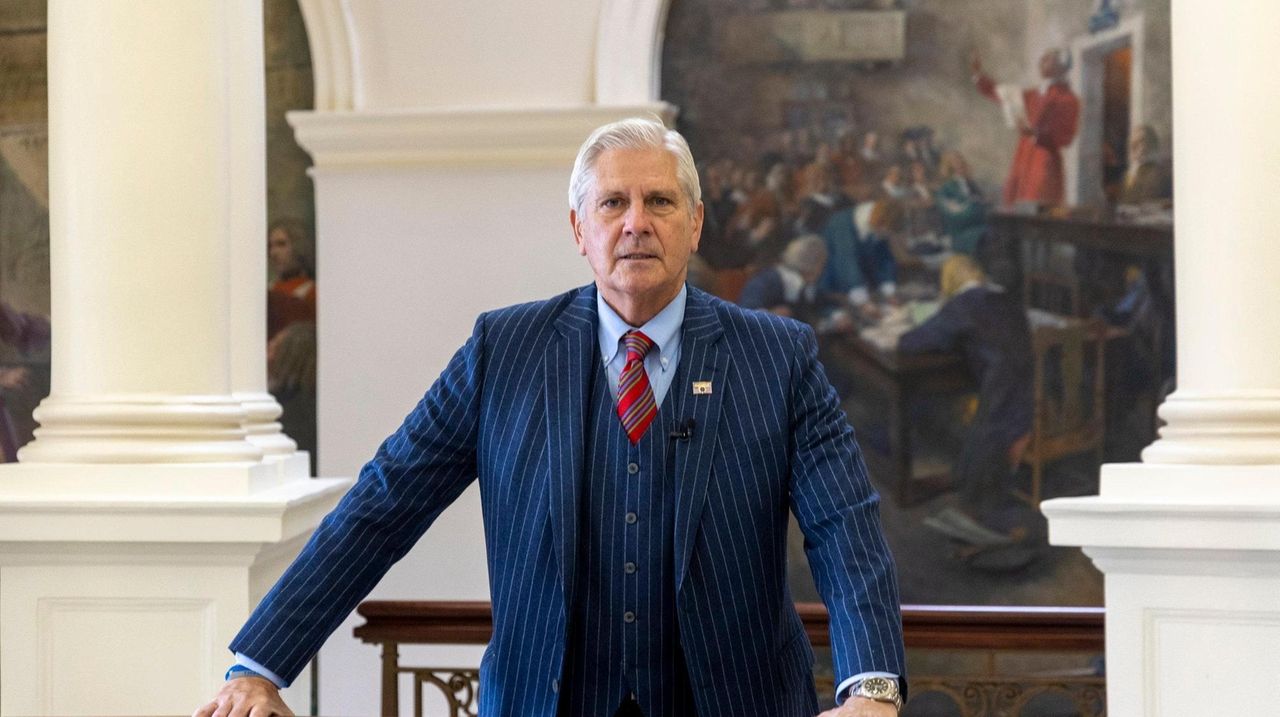 Nassau County Executive-elect Bruce Blakeman spoke about his plans for the county regarding the pandemic once he is sworn in. Credit: Howard Schnapp

Republican Bruce Blakeman, who takes office as Nassau County executive on Monday, is defending his opposition to indoor mask mandates, which he says are ineffective, as the highly transmissible omicron variant surges across Long Island and New York State.

"There’s no scientific evidence that it gets the numbers down," Blakeman said when asked why he would not enforce Gov. Kathy Hochul’s indoor mask mandate, which took effect Dec. 13 and runs until Feb. 1.

"The physicians and health care professionals that I’ve talked to said it’s got to be an N95 mask. And the vast majority of people are not wearing N95 masks; they're wearing these cotton-type masks, paper masks, I think they are not that effective, based on the scientific evidence that I've seen," he told Newsday.

While he supports vaccinations, and wants to significantly boost access to testing, Blakeman's approach to the mask mandate is at odds with recommendations from health experts and hospital officials, who say mask-wearing is crucial in the winter months to help slow virus transmission.

His comments, which came in a 45-minute Zoom interview with Newsday, offer a window into his thinking as he takes helm of one of the nation’s wealthiest counties and where he’ll have oversight of Nassau’s Health Department.

Blakeman also shared his plans to fix other issues facing Nassau, ones that he acknowledges will take a backseat, at least for now, to the immediate pandemic response. They include improving the county's property assessment system and approving new contracts for police officers and Civil Service workers.

To mask or not to mask

In discussing the pandemic, Blakeman cited "mask fatigue" among county residents and business owners who are tired of policing mask-wearing in their stores. He said he's looking at two bench marks: hospital admissions and ICU bed capacity. "And basically, we are still confident that we are nowhere near a crisis situation at the present time, that we have a sufficient number of hospital beds, that the ICU units are not filling up."

He said that while N95 masks are the most effective, they ultimately are too expensive to require, and the omicron variant, which first emerged in South Africa and struck the United States several weeks ago, is becoming like a "strong flu," he said a physician told him.

As of last week, 26% of hospital beds on Long Island were available, the data shows, and 10% is considered limited capacity.

Blakeman is among several county executives in New York State declining to enforce the mandate.

Public health experts say mask-wearing significantly reduces viral spread. Experts point out that coronavirus is spread by droplets in the air, or secretions. A stomach virus, or norovirus, is usually spread by touch, including coming into direct contact with an infected person, consuming contaminated water or food, or touching contaminated surfaces and then putting your hands in your mouth.

Health experts told Newsday that Blakeman and other leaders who defy mask mandates are offering "mixed" or not "consistent" messages by deciding not to enforce it.

Dr. Bruce Polsky, an infectious disease specialist who is chairman of medicine at NYU Langone Hospital-Long Island in Mineola, said: "So, without getting into politics … by their actions, to say they're not enforcing, they're sending a message to the public that they do not view this as important. That sends a message. So now we have a mixed message. We have the Governor, and virtually all public health authorities and experts saying that a mask mandate is a scientifically based, evidence-based way to diminish the risk of transmission of a highly contagious virus."

He continued, "what it does is send a dangerous message to the public that diminishes the public health message."

Experts say it's premature to conclude that omicron is a weaker variant than the strains that have come before it, or predict how soon it will recede. It is also too early, experts say, to conclude that future COVID-19 strains will become weaker than earlier versions of the virus.

"It would seem prudent from a public health standpoint to require masks in indoor settings until we are through this omicron surge at least," Polsky said.

Experts acknowledge that N95 and KN95 masks are the most protective, but other types of masks are also effective.

Using higher-quality masks helps, "but it does not mean that a surgical mask or a cloth mask has no value, and with such high spread in the community now, it remains a useful tool," said Dr. David Hirschwerk, infectious disease specialist and medical director of North Shore University Hospital in Manhasset.

Blakeman does want people to be vaccinated. He received the Johnson & Johnson vaccine earlier this year and got a Pfizer booster two weeks ago. He contracted COVID-19 in April, before he was vaccinated.

"I suggest that people get vaccinated," he told Newsday. "So for the people who are unvaccinated that might get seriously ill, I think that that's a risk that they're taking. But if you are fully vaccinated, why get fully vaccinated and then say you have to wear a mask? I don't understand that."

Because omicron is so contagious, "it becomes even more critical to try to minimize the risk of transmission, and we know that masking does that," Dr. Wafaa El-Sadr, a professor of epidemiology and medicine at the Mailman School of Public Health at Columbia University in Manhattan, told Newsday.

Once criticized as a perennial candidate, he has said he subscribes to a maxim in a 1910 speech from Theodore Roosevelt, commonly referred to as "The Man In The Arena."

Roosevelt said at the Sorbonne in Paris: "It is not the critic who counts; not the man who points out how the strong man stumbles or where the doer of deeds could have done them better. The credit belongs to the man who is actually in the arena, whose face is marred by dust and sweat and blood … ."

Blakeman is finishing his second stint on the Hempstead Town Board, where he's served since 2015. He also has served as a commissioner on the Port Authority board, practiced law, and worked as a business consultant.

Blakeman crossed members of his own party in 2017 when he endorsed Democrat Laura Gillen in her successful race against Republican Supervisor Anthony Santino. Gillen became the first Democrat to serve as Hempstead Town Supervisor in more than a century, and she selected Blakeman to serve as her deputy supervisor.

They eventually had a falling out, and he endorsed Republican Donald X. Clavin Jr. two years later in what became a successful campaign to unseat Gillen.

Blakeman said he has been studying political leadership over the past year.

He's been reading biographies of world leaders. He's in the middle of one about former British Prime Minister Margaret Thatcher, and read ones in the last year about Winston Churchill, former heavyweight champion boxer Joe Frazier, and former U.S. Presidents Harry S. Truman and Lyndon B. Johnson, both Democrats.

He said he admired Frazier because, "never took a step backward — maybe he should've in some of his fights. But he was always a guy who was always moving forward."

"I like to read about people who have done great things and people who've had to make important decisions, because I felt that I could potentially learn something from it."

As Blakeman re-enters county government, he is returning to some of the same issues that bedeviled his predecessors.

The administration of County Executive Laura Curran had been working with master developer RXR Realty to build retail, entertainment and other attractions on the 72-acre property known as the Hub.

Blakeman said he heard from RXR developer Scott Rechler about meeting on the issue, but he cautioned, "I wouldn't say that it's been done expeditiously, because here we are approaching 2022, and there's no final plan yet."

RXR spokesman David Garten told Newsday the company expects the Hempstead Town Board to vote on the plans in early 2022.

Blakeman also has been critical of the reassessment program Curran put in place in her first year in office. He blamed the program for causing sudden spikes in property taxes and called out bureaucratic errors in the program's implementation.

The Curran administration has said the values they assigned were highly accurate.

Blakeman said he's had conversations with outside consultants about how to fix the way Nassau values properties, but isn't ready to disclose any specific reforms.

"We've got to get our arms around what went wrong. And so far … we haven't had access to the data and the information," he said.

When he takes office on Jan. 1, Blakeman says he will "have a lot of concerns. But obviously, if you got a lot on your plate, the best thing to do is start taking things off your plate."

"There is a lot to be concerned about," he said. "And I think basically we're up to the task. Everything will be in place by January First, and we will methodically but aggressively tackle all the issues that come before us."

No mask, vaccine mandates for Blakeman inaugurationThe incoming Nassau County executive will be inaugurated Monday at the Cradle of Aviation Museum in Garden City.