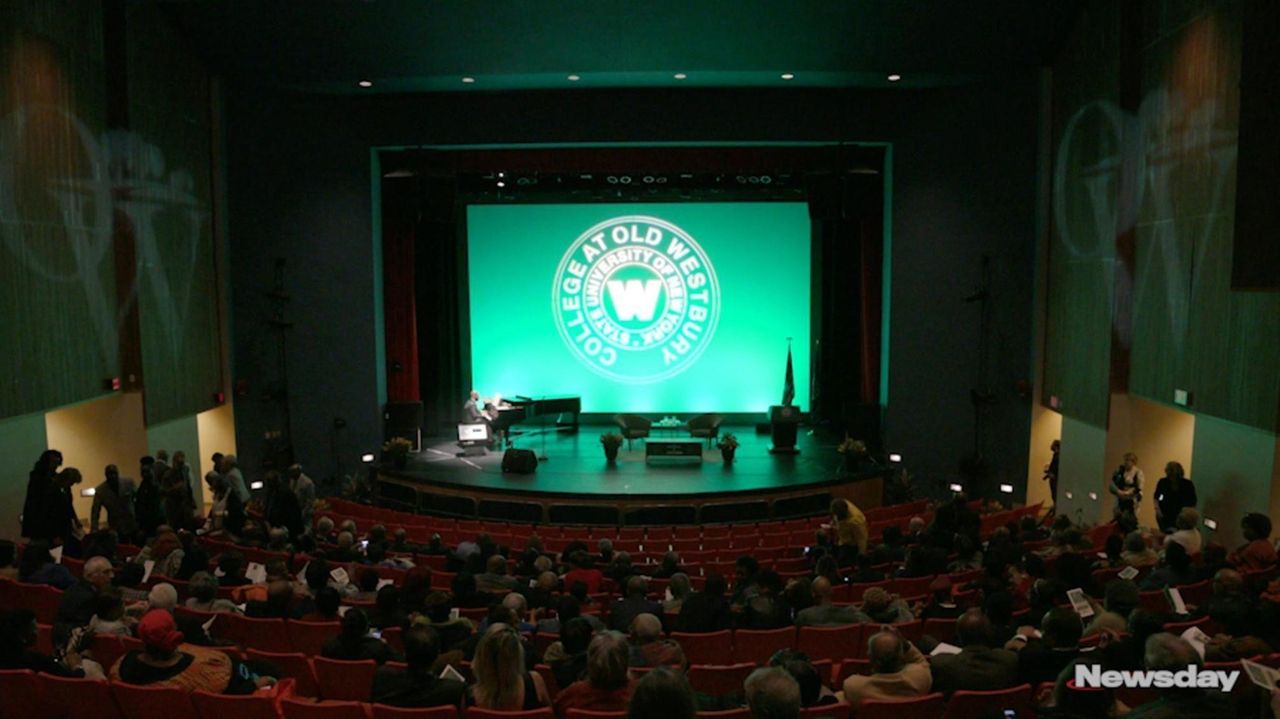 When the Rev. Calvin O. Butts III was named president of SUNY Old Westbury, the move provoked controversy and skepticism.

After all, Butts was the full-time pastor of the influential Abyssinian Baptist Church in Harlem. And he had never held a job in academic administration.

Skeptics didn’t think he could handle both positions at the same time — especially not at a college that at the time had been marked for possible closure.

Two decades later, Butts, 70, is widely acclaimed for his leadership and transformation of the university.

On Saturday night the college’s longest-serving president held something of a farewell event before he officially leaves his post in late January.

He participated in a public interview with journalist Randall Pinkston before an audience of several hundred in the campus' Maguire Theater, and listened with a smile as the college announced it will name its library after him.

Butts reminisced about the difficult days of his early tenure, the growth the college has seen, and its solid status today.

“We are a jewel on Long Island," Butts told the crowd. “We have a very successful college here today, one that I want more and more Long Islanders to look at," along with people from outside the region.

State Comptroller Thomas DiNapoli, who has known Butts for years, gave introductory remarks, telling the crowd, “What an extraordinary legacy President Butts leaves for this campus and for the SUNY system."

Butts “will certainly go down in history as the most extraordinary president of” SUNY Old Westbury, he said.

As a sign of the college’s growth, Butts said it would be constructing a $130 million STEM center, partly to meet the growing demand for new workers in the health care industry on Long Island.

Butts, a dynamic figure in the African American community and renowned civil rights leader, has said he plans to go on study leave for the spring semester and possibly continue teaching next fall.

His tenure at the college, which opened in 1968 and has been comprised mainly of minority students, has largely quieted the early skeptics.

“The '80s were turbulent. The '90s was almost a period of despair,” Patrick O’Sullivan, the college’s provost and vice president for academic affairs who has worked at the college for 44 years, said in an interview. But “over the past 20 years the college has reached new heights.”

Enrollment has grown from about 3,000 students a decade ago to a record 5,128 now. Butts has overseen more than $200 million in capital construction and renovation projects including the university’s first dorms.

He told the crowd that two decades ago he had applied for a job teaching at Old Westbury as an adjunct professor.

Days later, three of the college’s trustees showed up at his church in Harlem, and offered him the presidency, telescoping the usual yearlong process. He took the job.

To skeptics at the time, he had responded: “The college is just about dead, and you got the right guy, as I am in the resurrection business.”

But many of the faculty, who were not consulted about the hire, were furious, Butts told the crowd.

At his installation and inauguration, some faculty stood up, turned their backs to him, and walked out, he said.

“There was a lack of trust between faculty and administration," he said. “I mean, it was palpable.”

There were also "town-gown” problems he had to deal with. “Many of the people who lived around the campus had never been on it," he said. “They were afraid to come on it” because of the many minority students.

“We are still dealing with, you know, the racism that is still out there," he said. “People still carry that kind of stigma."

But he said that the college’s reputation and admissions and academic standards have grown steadily, and students have met the challenge.

“When you demand excellence from these young men and women,” he said, “they will give you excellence.”

How to get a COVID-19 vaccine appointment
1:04
Cuomo breaks ground on $439M plan to redirect treated sewage
1:30
Cuomo: NY still 'making progress' in reducing virus positivity levels
Top photos from around LI from April 2021
Bethpage Air Show ticket sales resume after website breaks
1:04
10 years ago, they were valedictorians. Where are they now?
Didn’t find what you were looking for?