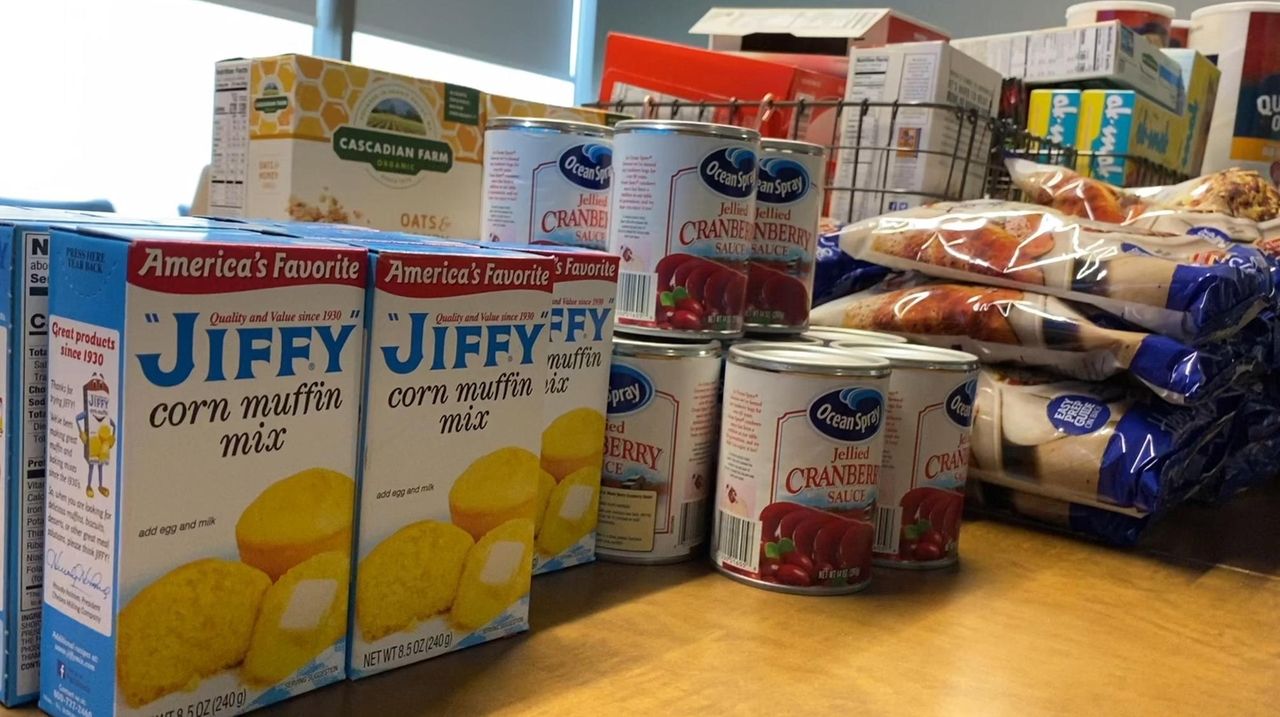 Officials at the Memorial Sloan Kettering Nassau in Uniondale spoke Wednesday about the center's food pantry, which helps cancer patients cope with the stress of health and financial challenges. Credit: Howard Schnapp

A person struggling with cancer can spiral into financial distress, as they lose a job or go on disability or simply run short of cash paying for treatment.

For that reason, the Uniondale treatment center of Memorial Sloan Kettering Nassau now has a food pantry that provides free, nutritious food for all its cancer patients.

Basically, center officials surveyed patients and found that many of them, even some with health insurance, were having money troubles, said Julia Ramirez, a community outreach manager for Kettering's immigrant health and cancer disparities group.

"It was so alarming — Patients were deciding, 'Do I go to my appointment or feed my family?' " Ramirez said. "It's such an easy concept: Let's bring the food to them."

Moreover, these patients — often stressed out and not eating right — were often weaker and did not do as well with the treatment, said Dr. Oscar Lahoud, the center's assistant attending physician for adult bone marrow transplants service.

"We have some therapy that costs $18,000 a month in pills," Lahoud said. "Even for someone with insurance, the copays may be tens of thousands of dollars at the end of the year."

At a time of year when food pantries are providing food for Thanksgiving dinners, this one is doing that and helping people get through the often overwhelming experience of fighting cancer.

The food pantry here opened on the second floor in April, the same time as the ribbon was cut on the Uniondale cancer center that offers diagnosis and treatment. So far the pantry has served 50 patients, and provided 203 bags of food to make about 2,000 meals, officials said. Grants, fundraising and donations pay for the food.

The pantry hardly resembles the traditional church pantry of cupboards filled with shelf after shelf of nonperishable goods. Here, the pantry is basically a tall metal push cart with a few shelves stocked with food that gets wheeled into a conference room once a week. No sign outside announces it is the food pantry.

It's better that way, Ramirez said, because many of their cancer patients have never asked for such help and prefer discreetness.

Kayla Gangemi, who staffs the pantry, said it sometimes took a little coaxing to bring in a patient. She estimated that perhaps half the patients who visited the pantry had been low-income before their cancer diagnosis.

"We try to make this a safe place for the patient," said Gangemi, 23, a community outreach assistant.

Hugo Concha, a care coordinator who helps out in the pantry, said he had developed various ways to subtly determine whether a person could benefit from the pantry, and to gently direct them there. Sometimes, as he's going over their paperwork with them he'll mention the pantry, emphasizing that a person doesn't have to be desperate for food to use it and there is no income eligibility, he said.

Sometimes, Concha just packs up a week's worth of groceries and delivers it to the patient while they are receiving treatment.

Just the other day, the wife of an older patient came in. She said she knew her husband wouldn't be open to the idea of using a pantry. But he had just gone on disability pay and their finances were getting tighter.

The pantry also has come to serve as a hub to help patients find other assistance in the community. Gangemi steers them toward financial assistance, transportation options and counseling.

Ramirez, the community outreach manager, sees how these patients have so much worry on their minds. Relieving the burden of getting food can help, she said.

"We're taking away this one worry," she said, "so they can focus on getting better."

Cuomo: NY still 'making progress' in reducing virus positivity levels
Top photos from around LI from April 2021
Bethpage Air Show ticket sales resume after website breaks
1:04
10 years ago, they were valedictorians. Where are they now?
2:08
Report: MTA spent $1.1 billion in OT pay in 2020; top earners at LIRR
2:45
Victim of Stop & Shop shooting a 'genuine great person,' friends, family say
Didn’t find what you were looking for?