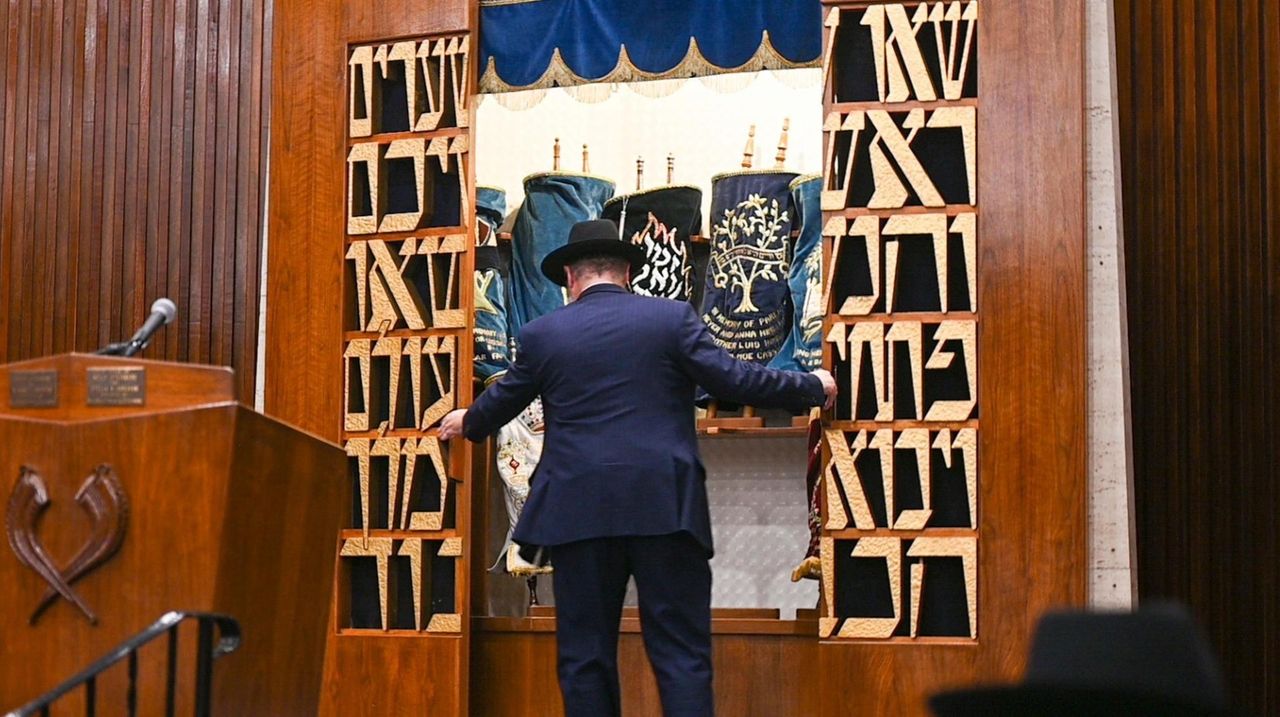 Members of the Chabad of the Beaches in Long Beach gathered for a ceremony for the first time since nine Torahs were left in disarray after a burglary on Aug. 21.  Credit: Howard Simmons

Nine Torahs ransacked in the burglary of Chabad of the Beaches in Long Beach, and later secured, were returned to the synagogue in a ceremony Monday night.

Rabbis from Nassau County and New York City each picked up one of the Torahs at the back of the synagogue and carried it to the front for placement in the holy ark, a cabinet where the handwritten scrolls are kept that is considered sacred in Judaism. Members of the congregation and the community watched in the packed synagogue.

Since the Aug. 21 burglary, Eli Goodman, rabbi at the Chabad of the Beaches, had kept the Torahs at his home.

It’s been a "very difficult time," Goodman said. The ark, which sustained damage, has been secured and fixed, he said.

"We’ve cleaned up our synagogue and we’re ready for action," he said. "We felt it would be important to have a positive message for our community by bringing [the Torahs] back."

The scrolls were discovered in disarray inside the Walnut Street synagogue after the burglary. Two torahs along with silver crowns were stolen. Long Beach police said at the time. Those Torahs are still missing, Goodman said.

A door of the holy ark had been broken off its hinges, police said.

Hunter McElrath, 23, was arrested and charged on Aug. 22, police said.

McElrath was a person of interest after he was found naked, wearing a prayer shawl and coming out of the water on the beach the day of the burglary. McElrath faces charges of second-degree burglary, second-degree criminal mischief and grand larceny of religious items.

Long Beach Police Commissioner Ron Walsh, who attended the event Monday, said the investigation into the burglary and the missing Torahs is continuing.

Police do not believe the break-in was a hate crime or antisemitic.

Elliott Friedel, of Atlantic Beach, said that especially with what’s happening with the coronavirus pandemic, "we should be together."

"The Torahs are very special," said Friedel, 78, "and of all the symbols to be taken, the Torahs to people are not just a book, it’s special."

For Barbra Gedacht, of Long Beach, the Torah represents a "deep sense of history."

"It's not something to be destroyed," she said.

Gedacht said despite the burglary and the damage done, she wasn't focused on it Monday.