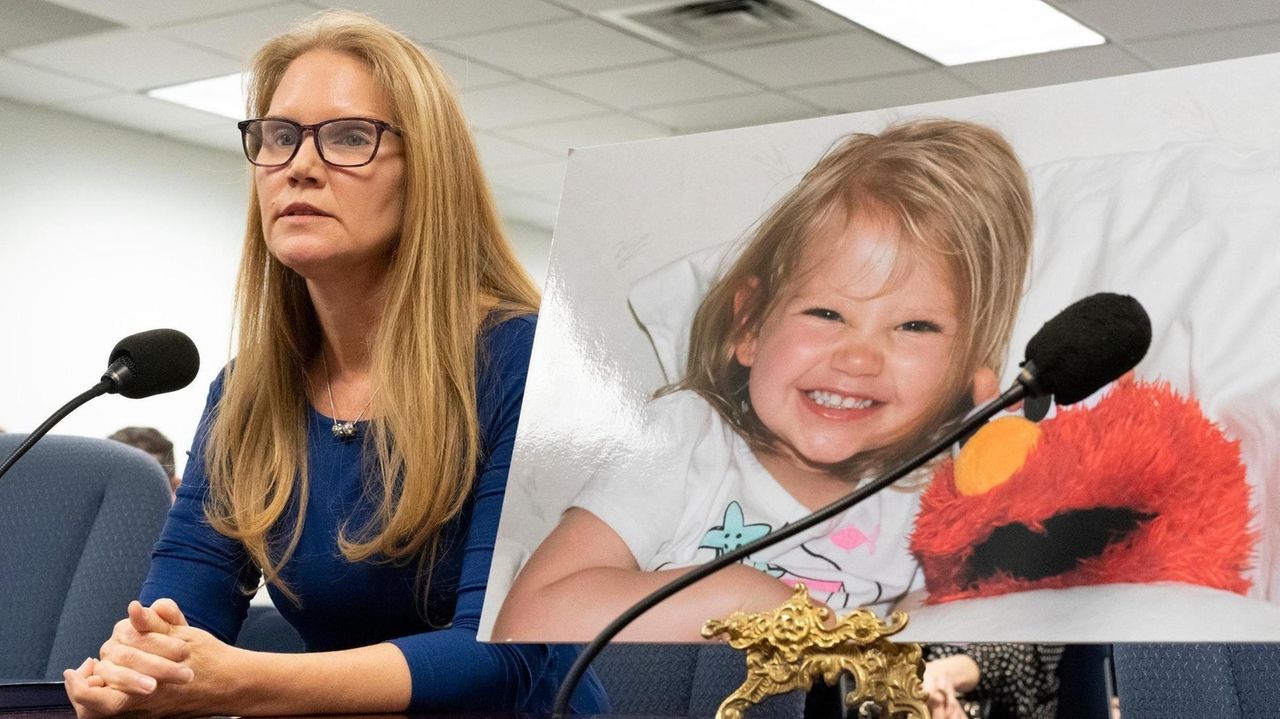 Jacqueline Franchetti on Thursday testified before a state Assembly hearing about her experience after her 2-year-old daughter, Kyra, was killed in Virginia by the girl's father in a murder-suicide.  Credit: Newsday / Matthew Chayes; Charles Eckert

The grinning toddler with the Elmo doll looked out from the photos Jacqueline Franchetti showed to lawmakers and told how the girl's father had ended her life in 2016 before killing himself.

“I was devastated,” the Manhasset woman, who had been in a custody dispute with the father, said afterwards. “I still am. She deserved so much more. Her life was stopped and cut short at 28 months old. She had so much going for her. She should be in kindergarten right now.”

Franchetti testified Thursday morning in Lower Manhattan before a joint hearing of three Assembly committees — Judiciary, Social Services, and Children and Families — considering “the rights of children in court.”

She said she wants changes to how the courts handle child-custody cases, including giving greater weight to “child safety” in judicial decisionmaking and altering training for the bench and bar.

“It is upside down and backwards right now,” she said. "And we desperately need to change that.”

Kyra, 2, was found dead on July 27, 2016 — murdered by her father, Roy Eugene Rumsey, 58, in Fairfax, Virginia. He shot her and himself and then set the home on fire, according to an account in The Washington Post.

Franchetti and Rumsey were never married, and Rumsey had visitation at the time of the killing, she said.

At Thursday’s Assembly hearing, Franchetti said the Nassau Family Court, which was adjudicating the custody dispute, should have done more to protect the child after she told the court Rumsey became abusive.  She said she had not reported it to police out of fear it would be used against her in the custody dispute.

“Five years ago, I believed in our justice system. Five years ago, I never thought I would say, ‘My daughter Kyra, who’s right here,’” Franchetti testified, pointing to the photo of the smiling girl, “had been murdered by her father.”

Lucian Chalfen, a spokesman for the state Office of Court Administration, which represents courts statewide, said in an email: “Many of the most difficult and complex court cases in the New York State court system emanate from Family Court. Judges have the unique mission of having to protect the rights of families and children in which the consequences can be life altering for all involved. We provide and support further education and training for family court judges on an ongoing basis.”

New York’s custody statutes mirror those across the nation in awarding custody based on the best interest of the child. The custody statutes require that domestic violence be taken into account, said James Joseph, a Garden City lawyer who’s practiced family law for 26 years.

“The child’s safety is clearly part of a best-interest consideration,” he said.

Franchetti was among several witnesses to be questioned by three members of the Assembly, Andrew Hevesi (D-Forest Hills), Jeffrey Dinowitz (D-Bronx) and Ellen Jaffee (D-Suffern).

Among other suggestions made to lawmakers at Thursday’s hearing was to allow the state easier access to the wages of parents who are independent contractors -- such as Uber drivers -- in order to withhold the money to fund a parent’s child-support obligations.

The request came from Eileen Stack, deputy commissioner of child-support services for the state’s Office of Temporary and Disability Assistance, who said there are 776,000 children who receive child support in New York State, totaling $1.8 billion.

For her part, Franchetti is involved in a foundation in her daughter’s honor -- The Kyra Franchetti Foundation -- and urges lawmakers at the local, state and federal levels to change laws and procedures.

“Kyra was a fiercely independent, giggly happy toddler. She loved Elmo and Mickey Mouse. She loved bubbles. She loved to be on the swings. She wanted to go fast. She’d go on the slides all the time,” Franchetti said. “The last day that I had with her, she just learned how to roll down a hill and she was really proud of her latest accomplishment.”