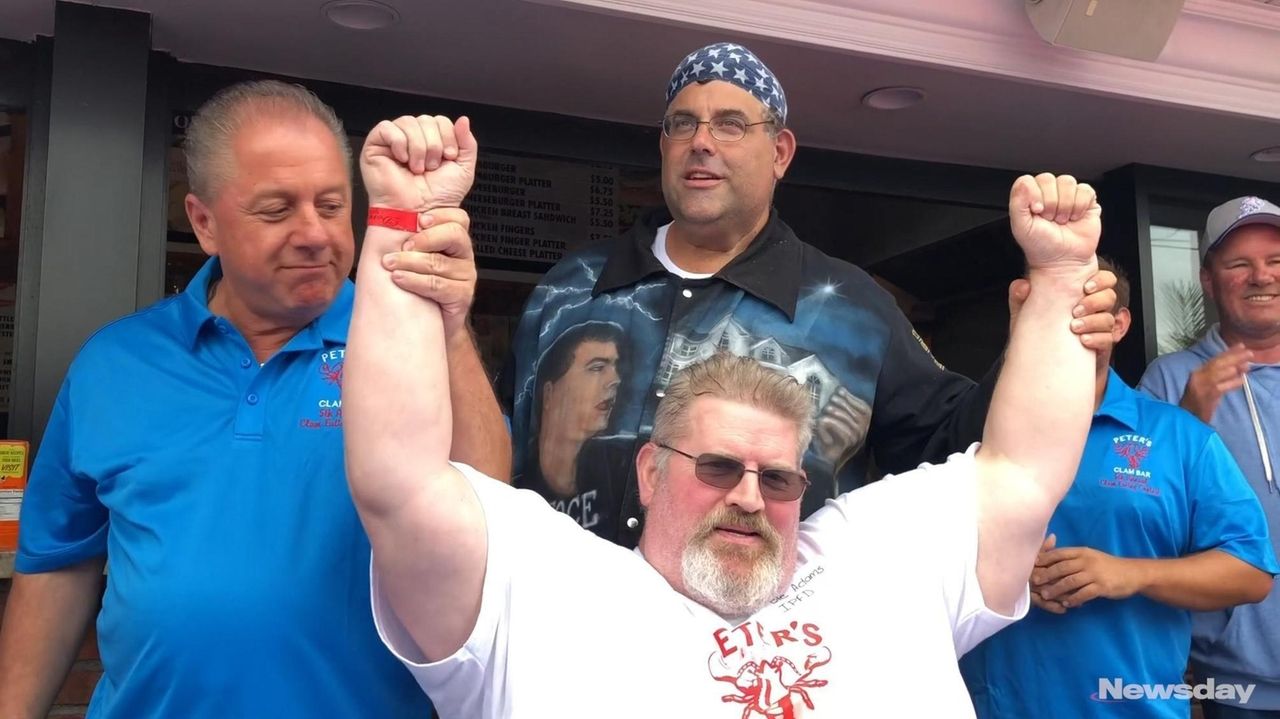 Nothing says Long Island like a raucous community clam-eating contest.

The coming together of people, the cheering for fan favorites, the sheer belt-loosening abandon — all that was present Sunday for the annual Long Island Clam Eating Contest in Island Park.

The event, at Peter’s Clam Bar, began five years ago as a way to raise money for South Shore firehouses damaged by superstorm Sandy. Each year, firefighters from Long Island departments compete, along with a separate contest for the public.

This year, the event benefitted the Nassau County Firefighters Museum and Education Center in Garden City.

Like all great sporting events, it featured some fierce rivalries.

There was Pete Adams, the 2015 champion from the Island Park Fire Department, who took a kind of zen approach to competitive food consumption.

“It’s just not thinking about it,” said Adams, who wielded his fork with the speed and precision of a samurai. “If you think about it, you’ll get sick.”

There was defending champion Augie DeRiggi of the North Lindenhurst department, who did a shot of tequila before each match.

Anthony D’Esposito, a former chief of the Island Park department who helped dream up the carnivorous free-for-all, explained that the organizers chose clams because of Long Island’s long relationship with the marine mollusk.

While the Island’s clamming industry has suffered in recent times, it has had a long and profitable history. In the 1970s more than half the clams eaten in the entire country were from the Great South Bay. When clams were abundant, they also filtered 40 percent of the water in the bay every single day, according to the Nature Conservancy.

The event had the feeling of a local fair, replete with a guy galumphing around on stilts and a woman in a lobster outfit mingling with the crowd of about 200 people.

People shook their heads in disbelief. Children watched in awe.

The finals of the firefighters’ competition brought out the best among men and woman accustomed to accomplishing courageous feats that seem beyond human belief.

DeRiggi was a flurry of ingestion, using both hands to sloppily shove the innards of the shellfish into his mouth.

Alex Araya of the Islip Fire Department filled his mouth till his cheeks bulged like a squirrel’s on an eating binge.

In the end, Adams walked away with the winning check for $2,500, which he donated to his fire department and the firefighters museum. Over two rounds, he ate 164 clams in six minutes.