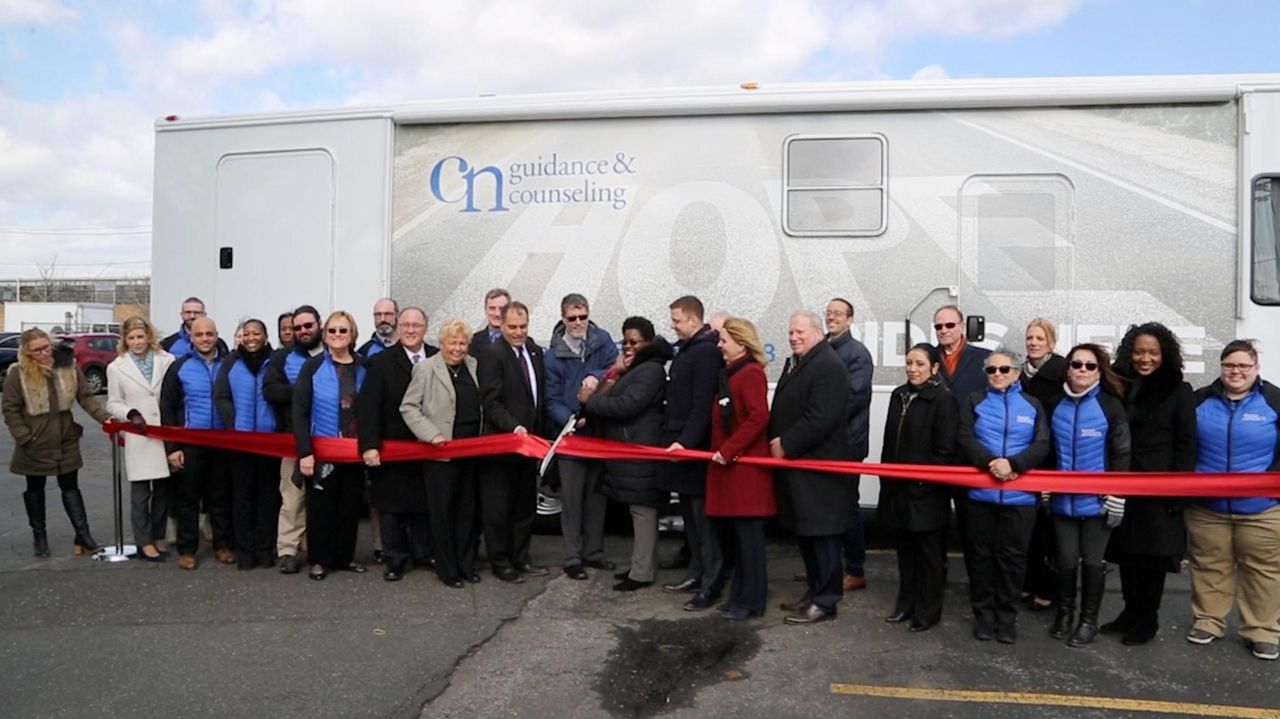 Nassau residents with opioid or heroin dependence but limited transportation or health insurance will have options due to a new state-funded mobile recovery unit providing specialized services in high-need neighborhoods, officials announced Monday.

CN Guidance & Counseling Services unveiled a state-of-the-art RV equipped with three private treatment rooms that will be staffed by a registered nurse, case worker and two clinicians who will use onboard video monitors to connect patients directly with doctors from the nonprofit's Hicksville location.

Jeffrey Friedman, chief executive of CN Guidance & Counseling Services, said many Long Islanders suffering through the opioid crisis, which has claimed nearly 3,700 lives on Long Island since 2010, are desperate to obtain help for themselves or their family. But theyhave limited resources and difficulty accessing a provider.

"We have seen this on the front line where people are frantic, calling us that they've been trying to get their loved ones into treatment for weeks," Friedman said at a news conference in Hicksville. "Now, we will be out in the community; on the streets, able to access services immediately. This initiative will remove the barrier about transportation and cost of treatment. This is a real game-changer for our agency … It's a needed service, and it will save lives."

The RV will be accompanied at each location by two minivans that will transport patients to CN's offices or a treatment and rehabilitation facility. While Narcan will be available on board for patients in immediate need, the facility is not designed for first-responders and will not dispense prescriptions.

Joseph Cavallo, 31, of Ronkonkoma, a recovering heroin and cocaine addict who will serve as an outreach coordinator on the mobile unit, said the vehicles will allow providers "to fill in the gaps that were there for so many years in treatment."

The three vehicles were purchased through a $1.25 million grant from the State Office of Alcoholism and Substance Abuse Services that will keep the unit operating through the end of 2019.

The mobile unit, the first of its kind in Nassau, will make scheduled visits to neighborhoods struggling with high rates of addiction, including Freeport, Baldwin, Bellmore and Hempstead, and provide on-site treatment, regardless of a patient's ability to pay or insurance status, Friedman said. While the RV will make regular visits to shelters, soup kitchens and outside emergency rooms, appointments can also be made for the vehicle to visit private homes, officials said.

Thomas Ingenito, 23, of East Meadow, said he began abusing drugs, from crack and cocaine to heroin and Oxycontin, after the death of his mother eight years ago. Ingenito, who works in a Hicksville warehouse, said he's overdosed 11 times but finally got clean after serving a six-month stint in the Nassau County Correctional Center for drug possession.

"I didn't want to hurt people anymore," said Ingenito, a CN client. "Too often, addicts are disregarded. People look at us like we're not even human. But we are human beings just like everyone else."

Fatal overdoses on Long Island fell 21 percent last year, from a high of 614 in 2017 to 483 in 2018, according to data provided by the police departments and medical examiners in Nassau and Suffolk counties.