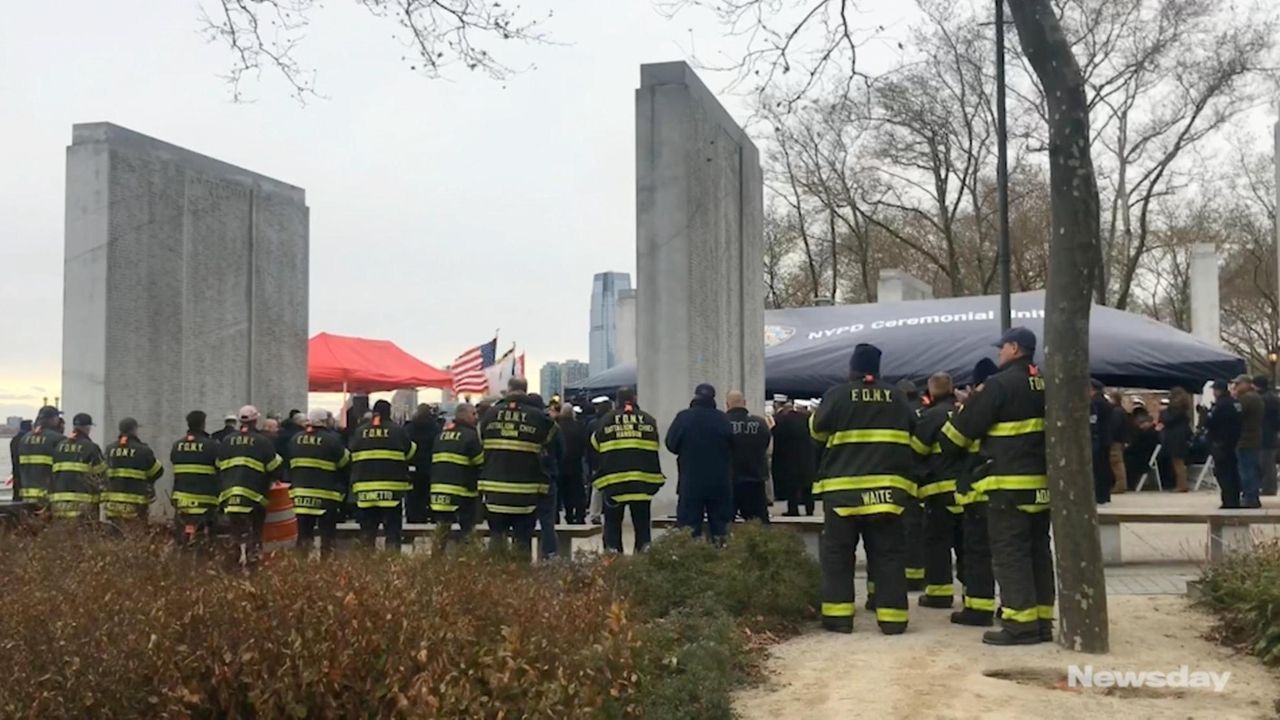 On Tuesday, the Coast Guard honored Vincent G. Danz, an NYPD emergency services officer from Farmingdale, and Jeffrey Palazzo, an FDNY firefighter, in a naming ceremony for two patrol ships. Both men were killed in the 9/11 attacks.   Credit: Matthew Chayes; NYPD; WTC Victim 10

In 2023, the year Vincent G. Danz’s namesake ship is commissioned, the Coast Guard's youngest personnel will be 17, born years after he was killed on Sept. 11, 2001, in the World Trade Center attacks.

On Tuesday, the Coast Guard honored Danz, an NYPD emergency services officer from Farmingdale, in a naming ceremony for the patrol ship.

The ship is to be a 154-foot-long cutter with a crew of 24, according to Chief Warrant Officer Mariana O'Leary, a Coast Guard spokeswoman. Danz, then 37, was believed to have been on the fourth floor of the World Trade Center’s North Tower.

Danz's widow, Angela Danz Donohue, who has since remarried, cried as she recalled her husband’s 18 years in the military and 14 years with the NYPD.

“Helping other people came as naturally as breathing to him,” she said at a frigid naming ceremony Tuesday at Battery Park in Manhattan.

New York City Mayor Bill de Blasio, speaking at the ceremony, said: “We think of ships being named after presidents or folks who are famous throughout history. But you know what? There are a lot of heroes whose names are not everyday names, but have done absolutely outstanding and extraordinary things, and they need to be honored too. So, this decision by the Coast Guard also recognizes the folks who do the hard work, the heroes who often don't get their due.”

Also at the ceremony, the Coast Guard honored Jeffrey Palazzo, an FDNY firefighter who was killed in the 9/11 attacks. An identical cutter is being named in Palazzo’s honor.

Palazzo was an FDNY firefighter for six years, in Brooklyn, Manhattan and Staten Island, according to the FDNY's chief of department, John Sudnik.

"When the sentinel-class, first-response cutter that will bear his name is completed, it will be a fitting tribute to this remarkable individual," Sudnik said at the ceremony.

Both men served as reservists in the Coast Guard — Danz as a port security specialist and Palazzo as a machinery technician, O'Leary said. Each man's name will be on his ship's stern.

The Coast Guard’s Jason Tama, captain of the port and emcee of Tuesday’s ceremony, said afterward: “They wore the Coast Guard uniform and served their nation, but they made their ultimate sacrifice wearing the uniform of the City of New York."

Danz’s remains were recovered in December 2001. He had left a message on his home answering machine for his wife that he was at the trade center.

"Pray for me and pray for these people,” he said in his last words. “I love you. I'll talk to you soon."

His widow said Tuesday: “Knowing that there will be a vessel at sea with Vincent’s name is to know that he will not be forgotten.”

The ships are going to be built by Bollinger Shipyards of Louisiana at an average cost of $58 million per ship, O'Leary said.

Once ready, she said, the ships could be deployed anywhere, for tasks including drug interdiction, search and rescue, natural-disaster assistance, fishery patrols, coastal security and enforcing the nation’s immigration laws.

Tuesday’s ceremony was attended by Admiral Karl L. Schultz, the Coast Guard’s commandant, who noted that the maritime service was founded in 1790, blocks away from Battery Park, when Alexander Hamilton established the Revenue Cutter Service, considered the Coast Guard’s predecessor.